Timeline of the Holocaust

November 1923 – German citizens seek solution to runaway inflation; 35,000 join the Nazi Party. Hitler attempts to seize power in Munich, is arrested and tried for high treason and sentenced to five years in prison. There writes Mein Kampf ("My Struggle") articulating his campaign against his archenemy, the Jews. He is released after eight months.

February 1933 – Nazis burn Reichstag building and create a sense of crisis. As a result, emergency powers are granted to Hitler.

March 1933 – Enabling Act is passed in German parliament, giving Hitler dictatorial power. The Nazi party is later declared the only legal party in Germany. The first concentration camp is established at Dachau.

April 1933 – Boycott of Jewish shops and businesses. The Gestapo is established.

May 1933 – Public burning of Jewish and anti-Nazi books throughout Germany.

July 1933 – Germany passes a law for forced sterilization of those with "genetic defects." Eastern European Jewish immigrants are stripped of German citizenship.

October 1933 – Jews are banished from law, media and the arts. German-Jewish doctors are permitted to treat only Jewish patients. Jews are forbidden to own land.

May 1934 – "Der Sturmer" accuses Jews of using Christian blood in Passover baking and other Judaic rituals. 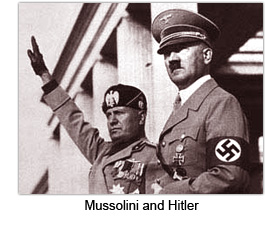 August 1934 – Death of Hindenberg. Hitler becomes head of state and commander-in-chief of the armed forces. Hitler proclaims himself "Fuehrer"; over 90% of Germans vote in favor of Hitler's new powers.

January 1937 – Jews are banned from additional professions, including teaching, dentistry and accounting.

November 1937 – "Eternal Jew" exhibit opens in Munich, the basis for the rabidly anti-Semitic film of the same name.

March 1938 – Germans enter Vienna and 183,000 Jews in Austria fall under Nazi control. The next day Austria is annexed to the Third Reich; all anti-Semitic laws are immediately applied.

April 1938 – Jewish property is registered for seizure within Greater Germany at a value of approximately 8 billion Reichmarks. Mauthausen concentration camp is established in Austria.

June 1938 – Munich synagogue is destroyed. The "Evian Conference" in France fails to provide a refuge for German Jews.

September 1938 – At the Munich Conference, Neville Chamberlain of Britain agrees to German annexation of Sudentenland in Czechoslovakia.

October 1938 – Following a request from the Swiss government, Germans mark all Jews' passports with a large red letter "J" to restrict Jewish immigration to Switzerland.

November 1938 – "Kristallnacht": Anti-Jewish riots in Germany and Austria. 300,000 are arrested, 191 synagogues destroyed, and 7,500 shops looted. A fine of one billion Marks is levied against German Jews for the destruction caused during Kristallnacht. All Jewish students are expelled from German schools.

December 1938 – All Jewish property is transferred to Aryan possession.

February 1939 – Jews are ordered to turn in all their gold and silver.

June 1939 – The S.S. St. Louis, carrying 930 Jewish refugees, is turned away by Cuba. The U.S. refuses to admit the refugees, who are then forced to return to Europe. 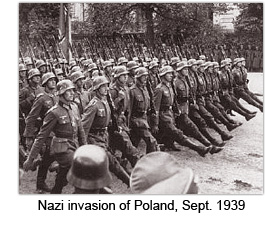 August 1939 – Soviet-German pact is signed by Molotov and Ribbentrop.

September 1939 – On September 1, Hitler invades Poland, marking the beginning of World War II. Two days later, Britain and France, obligated by treaty to help Poland, declare war on Germany. In less than four weeks, Poland collapses. Heydrich orders ghettos to be established in occupied Poland. German Jews are forbidden to own radios and a nighttime curfew is imposed.

October 1939 – Germany makes murder by medical personnel an official policy; sick and crippled people are to be exterminated. Forced labor is decreed for Polish Jews aged 14 to 60, and the first Polish ghetto is established in Piotrkow, hometown of Rabbi Yisrael Meir Lau.

November 1939 – Nazis destroy the Yeshiva (Talmudic Academy) in Lublin, burning its huge library of holy books in a brazen public display. All Jews in Central Poland are required to wear a distinctive yellow armband. Hitler narrowly escapes assassination when a bomb explodes in the historic Buergenbraeu Hall in Munich.

December 1939 – Adolf Eichmann becomes the head of the Gestapo wing dealing with Jewish affairs and evacuations. The Adult Euthanasia Program, known as "T4," becomes systemized with the gassing of Jewish mental patients.

February 1940 – The first deportation of Jews from Germany to Poland.

April 1940 – Himmler issues directive to establish a concentration camp at Auschwitz. The Lodz ghetto is sealed with 230,000 people in 1.6 square miles.

May 1940 – Rudolf Höss is appointed Commandant of Auschwitz and a concentration camp is established there.

October 1940 – Anti-Jewish laws are passed by the Vichy government in France. The Warsaw ghetto is established.

November 1940 – The Warsaw ghetto is sealed off, ultimately containing half a million Jews.

January 1941 – Gangs of Romanian Legionnaires hunt for Jews, looting and beating Jews in the street, desecrating 25 synagogues, destroying hundreds of homes and shops, and butchering hundreds of Jews. 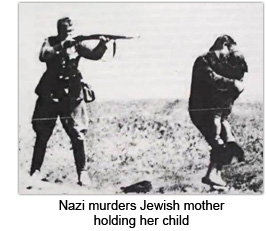 July 1941 – Einsatzgruppen begin the systematic slaughter of Lithuanian Jewry. Ultimately, 70,000-100,000 Jews are shot in the forests near Vilna. Lithuanians assist the Germans in the murder of tens of thousands of Jews in Kovno and Slobodka. Heydrich is appointed by Goering to carry out the Final Solution.

September 1941 – In the ravine of Babi Yar outside Kiev, 34,771 Jews are killed by Germans and Ukrainians. The first gassing experiments are conducted at Auschwitz.

January 1942 – Wannsee Conference: A plan to annihilate all 11 million European Jews is drafted. Hitler speaks at the Sports Palace in Berlin, declaring that "the war will end with the complete annihilation of the Jews."

February 1942 – The Struma, a derelict ship with 769 Romanian Jewish refugees on their way to Israel, is left adrift in the Black Sea and torpedoed by a Russian submarine whose crew suspects it was a German vessel. One person survives.

March 1942 – A thousand Jews in the Theresienstadt camp are deported to the new Belzec death camp; only six will survive the war. In the following months another 41,000 follow in their footsteps. Ten Jews are hanged in Zdunsk Wola near Lodz as substitutes for "the 10 hanged sons of Haman." The Jews of Lublin are deported to Belzec for extermination. The Jews of France and Slovakia are deported to Auschwitz. 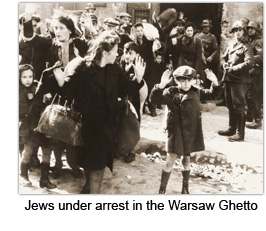 April 1942 – Einsatzkommando unit reports that more than 90,000 Jews have been murdered in Crimea in the previous four months.

June 1942 – In the Warsaw ghetto, more than 100,000 Jews have died of disease and starvation. The Treblinka death camp opens; 700,000 Jews will be murdered there. Eichmann notes that since December 1941, 97,000 people have been "processed" in three gas-vans. In reprisals for the assassination of Heydrich, the Czech town of Lidice is leveled and the entire population is murdered or deported. A second gas chamber is activated at Auschwitz. The New York Times reports that over one million Jews have been killed by the Nazis.

July 1942 – The first deportees are sent from Germany and Holland to Auschwitz. The first medical experiments are performed at Auschwitz. The Warsaw ghetto "Aktion" begins, where 6,000 people a day are deported to Treblinka for extermination.

September 1942 – The Chief Rabbi of Norway, Julius Samuel, refuses to go into hiding and chooses to join 208 Norwegian Jews sent to Bergen-Belsen. The 3,000 Jews of Tuczyn, stage an armed resistance against the Nazis and escape to the forests; only 20 survive the war.

November 1942 – The U.S. State Department confirms the existence of Nazi extermination camps and the murder of two million Jews to date.

February 1943 – The Bulgarian government signs an agreement with the Germans; 11,000 Jews are deported. Germany surrenders at Stalingrad; Russia begins reconquest of Ukraine.

March 1943 – Liquidation of the Krakow ghetto begins. In northern Bulgaria, farmers threaten to lie down on the tracks to prevent the deportation of Jews; the Bulgarian Government rescinds the deportation order. Crematorium II at Birkenau is activated.

June 1943 – Himmler orders the liquidation of all Polish and U.S.S.R. ghettos. Auschwitz reports a sterilization rate of 1,000 women a day.

August 1943 – Revolt of Sonderkommando in Treblinka.

October 1943 – Orders are given for the expulsion of all Danish Jews. Thanks to Danish underground operations, only 415 Jews are captured by the Germans and 7,000 are evacuated to Sweden. 600 prisoners of Sobibor's Camp revolt and try to escape; one crematorium is destroyed; most escapees are eventually caught and killed.

November 1943 – Within a few days, 50,000 Jews in the Lublin region are deported and shot in ditches behind the Majdanek gas chambers. Jewish underground in Budapest is set up including a workshop which ultimately supplies 10,000 with forged documents. 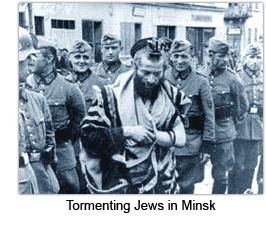 May 1944 – In North Africa, the U.S. War Refugee Board opens the first refugee camp. Deportation of Hungarian Jews to Auschwitz begins.

June 1944 – U.S. War Department refuses to bomb railroad tracks between Hungary and Auschwitz, where 12,000 Jews are being sent each day to the gas chamber. The allies are victorious on D-Day, marking the beginning of the end for the Third Reich.

October 1944 – Inmates in Auschwitz rebel; one crematorium is blown up.

November 1944 – Nazis try to hide evidence of death camps; prisoners are deported to Ravensbruck and Bergen-Belsen to meet the growing slave labor demand.

January 1945 – Death marches to the interior of Germany begin, costing 250,000 Jewish lives. Swedish diplomat Raoul Wallenberg, who saved tens of thousands of Hungarian Jews, is last seen alive with Soviet troops. Approximately 800 prisoners remaining in the Lodz ghetto (after 74,600 had been deported to Auschwitz) are liberated by Soviet troops. Soviet troops arrive at Auschwitz to discover 7,600 survivors; most prisoners had been sent out on a death march eight days before.

March 1945 – Anne Frank dies of typhus in Bergen-Belsen concentration camp. Hitler orders the destruction of all Germany, believing it to be unworthy of surviving him. His order mandates the destruction of not only military installations, but also all stores, industries, and transportation and communication installations. Nothing is to fall into enemy hands.

April 1945 – Most Jewish prisoners remaining at Buchenwald concentration camp in Germany are forced out on death marches. On his last visit to Theresienstadt, Adolf Eichmann is heard to say, "I shall gladly jump into the pit, knowing that in the same pit there are 5 million enemies of the state." U.S. troops liberate Buchenwald and Dachau; British troops liberate Bergen-Belsen. U.S. troops occupy Munich. On April 30, Hitler commits suicide in a Berlin bunker and Germany surrenders. 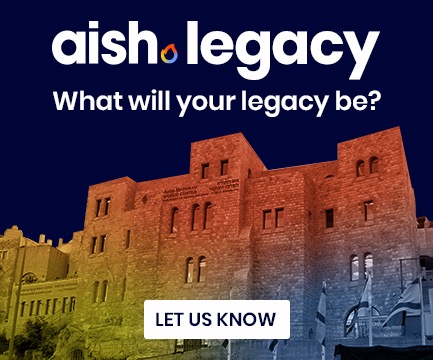