Hiroshima, the White House and Israel 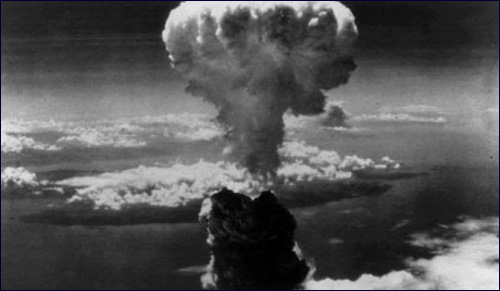 Those who instigate war need to pay the price for their evil. Unless it’s waged against Jews.

This month, for the first time, an incumbent President of the United States will visit Hiroshima. It is now more than 70 years since the atomic age began with the decision by President Harry S Truman to use this new weapon of mass destruction against the cities of Hiroshima and Nagasaki. The goal was to quickly and immediately bring an end to the war – a war begun four years earlier by the Japanese with the sneak attack against Pearl Harbor.

Soon after, Japan unconditionally surrendered. A long and horrific ground battle, what Truman called “an Okinawa from one end of Japan to the other,” was averted, with many tens if not hundreds of thousands of allied forces saved from almost certain death.

But the cost of civilian deaths was tragic beyond words. In Hiroshima the number killed is estimated between 90 to 150,000, and between 40 to 80,000 in Nagasaki. Most of the deaths occurred immediately on the first day, with the following months adding large numbers who died from the effect of burns, radiation sickness and other injuries compounded by illness and malnutrition.

The first – and to this day the only – use of atomic bombs brought a barbaric war to an immediate end, but at a horrendous cost.

How does one determine the correct moral balance between the two forces at play? The first – and to this day the only – use of atomic bombs brought a barbaric war to an immediate end, but at a horrendous cost. Historians as well as theologians continue to debate the issue. What makes the question so very difficult is the enormity of the numbers of innocents who perished.

But on the eve of President Obama’s visit to the site where President Truman’s decision was carried out the White House has made clear there will be no apology. In retrospect, the United States did what it had to do. War is hell. That is a given. Innocents die among both sides. Those who, like Japan, make clear their intention to destroy another nation need to be prepared to face the consequences. Civilians died in Hiroshima and Nagasaki because the United States gave greater priority to the lives and well-being of its own citizens who were the victims of a warmongering people.

“No apology to Japan” is America’s headline to the world. If the choice is between us or them, the collateral death of civilians is a sad but necessary evil.

But somehow this policy seems to lose support specifically when it comes to Israel.

Israel, too, has the ability today to deploy an atomic bomb against its enemies. It has never done so, nor will it other than in response to total destruction. What Israel has done when attacked by Gaza, a city voluntarily ceded to Palestinians in an effort to gauge whether an end to occupation as well as Palestinian self-government would enhance chances for peace, was to show restraint in the face of ongoing and unprovoked missile attacks for over two years. When finally Gaza militants proclaimed war and by their own charter declared their goal of bringing Israel’s existence to an end, Israel fought back. It bombed the places from which Palestinians fired their missiles – places purposely chosen to be in civilian areas, near schools and hospitals, in order to increase civilian casualties.

Never in history were such elaborate efforts made to prevent deaths of the civilian population surrounding soldiers engaged in the midst of hostile activities against Israel’s own civilians.

Israel literally invented new ways to diminish the number of deaths of the very people intending their destruction. Warfare which throughout the ages made no distinction between combatants was now treated to “knocks on the roof” as warning to leave areas shortly to be bombed as military sites. Raids on enemy officials and leaders were called off if it became apparent that innocent women and children might also become victims. Never in history were such elaborate efforts made to prevent deaths of the civilian population surrounding soldiers engaged in the midst of hostile activities against Israel’s own civilians.

The response of John Kerry, America’s Secretary of State? Israel should be doing more to protect their enemies. After all, there seem to be a larger number of Palestinian deaths than Israelis - as if Jews need to appease the world if they refuse the role of victims assigned to them throughout history by increasing the count of their dead! The response of the United Nations? Israel should be brought before the world court and an international tribunal for its immoral and illegal efforts to defend itself from the missiles raining on its cities from beleaguered and “occupied” Gaza.

At this very moment, while Gaza misappropriates the cement it should be using for reconstruction to build more and highly sophisticated tunnels reaching into Israel, tunnels from which it again hopes to conduct war in accord with its covenant to destroy Israel, Israel remains internationally condemned as aggressor.

All this while the United States reaffirms that it owes Japan no apology for the deaths of almost a quarter of a million people - because war is war and those who start it need to pay the price for their evil. A principle to which the world it seems subscribes for everyone – except for Jews.

Poland's Tragedy is Our Tragedy

A Boy Who Saved 17 Lives Gets a Big Surprise