Abraham Maslow was a humanistic psychologist who taught at Brooklyn College and Brandeis University in the mid-twentieth century. He proposed a theory of motivation, known as Maslow’s hierarchy of needs, which is taught in virtually all introductory psychology courses, and is also popular in the fields of business and education. While the theory is more nuanced than usually presented, the basic idea is that humans have five different levels of needs to be fulfilled.

The hierarchy starts with physiological needs like food and water and then moves to safety needs, like shelter and protection from danger. The third need is that of belonging and connecting socially, and the fourth is to feel respected and have a sense of self-esteem. The final need is self-actualization, which is the need to fulfil one’s potential. In later works, he added a concept called self-transcendence, which is driven by something greater than the self.

Maslow’s theory is often illustrated as a triangle, with the lower, physiological, needs placed at the bottom, progressing through to the pinnacle of self-actualization. 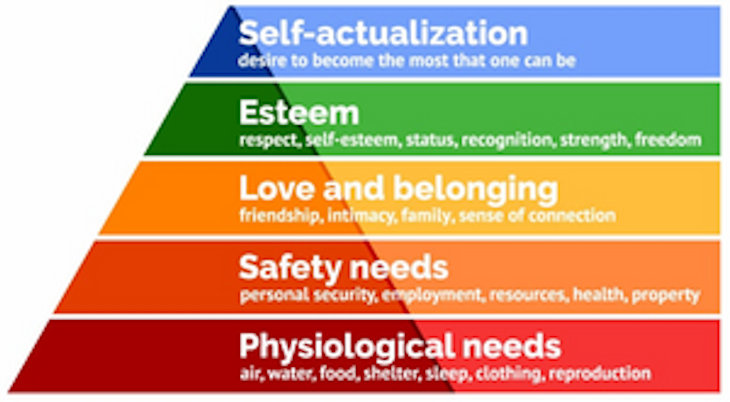 However, Todd Bridgman, Stephen Cummings, and John Ballard argue that Maslow himself never mentioned the concept of a triangle anywhere in his writings, and that the use of that icon to illustrate the theory was first done by a management textbook. While embedding the theory with the visual aid of a triangle has helped spread its widespread popularity, they argue that several misconceptions emerge as a result of the way the triangle is used to symbolize the hierarchy – a point we will return to shortly.

One of the most ancient and ubiquitous prayers we recite is rooted in this week’s portion, namely, the Priestly Blessings or Birkat Kohanim. It is recited by many several times a day and has a special place on Friday night as part of the blessing that parents give their children. Even though we recite it so often, or perhaps because we recite it so often, we may miss its textual nuances. As you read the verses, pay close attention to the structure and see if you notice any patterns, as well as if you can identify the basic meaning of each distinct component of the blessing.

Rashi explains that the first blessing is a material blessing—that your goods and property should be blessed. Protection refers to physical safety, that “plunderers should not come and take your property.” According to the Midrash (Bemidbar Rabbah 11:6), the second blessing, which recites light, is a reference to Torah, and represents a spiritual blessing. The third blessing, Professor Nechama Leibowitz argues, sums up the previous two and adds the concept of peace, because without peace, the previous blessings don’t hold.

Summarizing her analysis, Professor Leibowitz writes, “Accordingly the three sections of the priestly benedictions illustrate an ascending order, starting with a blessing concerned with man’s material needs and then dealing with his spiritual wants, and finally reaching a climax combining both these factors together, crowning them with the blessing of peace.”

In conclusion, Professor Leibowitz writes, “[t]his ascending order and increasing surge of blessing is reflected in the language and rhythm. The first phrase consists of three words, the second five, and the third of seven.” In bolstering the argument of the literary precision, Rabbi Jonathan Sacks adds that not only are the number of words precise, but so are the number of letters! The first line has 15 Hebrew letters, the second has 20, and the third, 25. When centering the verses, the image that emerges should be familiar;

In comparing the triangle depicted in the Birkat Kohanim with the triangle associated with Maslow, there is one glaring difference. Maslow’s hierarchy is depicted as bottom up. The long part of the triangle on the bottom represents the physiological needs, while the uppermost point is self-actualization. One critique of this representation is that it can be interpreted as elitist – only a small number of people can ever reach self-actualization. A related critique is that this imagery could suggest that the most amount of time and energy exerted by most people is on the lower needs, for the most part ignoring the higher ones.

In the “hierarchy of needs” presented in the Birkhat Kohanim triangle, the starting point is not on the bottom but on the top. Perhaps this symbolism represents a counterpoint to the aforementioned critique of the triangle associated with Maslow. These blessings are for everyone, not just the elite. Everyone has the capability and the charge to reach their potential in blending the physical and spiritual. In addition, when prioritizing our time and our tasks, we should spend the least amount of time with purely material endeavors, and focus the bulk of our energies on serving God by combining the spiritual and the physical, with the hope and blessing that we can do so in a state of peace and tranquility.