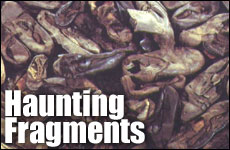 My journey to the camps in Poland.

Standing in a train station inside the remains of the original cattle cars, I was standing where so many Jews had stood as they were transported to concentration camps. I heard people crying, but I could not react - I was in shock. These boards were soaked with horrible memories. How could I begin to take it in?

In the Lodz cemetery there were over 40,000 graves, all Jewish, and many from the people of the Lodz ghetto. As I visited different graves, I thought about the people who lay below the ground. How many of their hands could I have held? What would their eyes have looked like, if I could have looked into them? Who were their families, their descendants? There were so many stories saturated in this one place that I couldn't begin to absorb it all. From there it got worse. As the evidence of such tragedies overwhelmed me, my heart closed down.

I felt terrible. Not because the people died, but because I couldn't feel anything at their death.

In the small town of Dubia, the inscription that once hung above the ark of a synagogue was now just a crumbling wall in a decrepit apartment attic. It was the single testimony to all those who were sent to the death camp in Chelmno. When I saw the ruins of the death camp, I felt terrible. Not because the people died, but because I couldn't feel anything at their death. My eyes stayed dry as I saw the rubble. I heard how they were driven in a gas truck to the mass graves or mass pyres, but I couldn't prod my heart to respond. Over 300,000 thousand people died in that place and I couldn't even shed one tear.

Later as I was reciting Psalms, I apologized to G-d that I wasn't able to feel the pain of these terrible losses, and admitted how much my own apathy distressed me. One tear trickled down my face and then another. I was heartbroken over my own apparent indifference to the tragedy of my people. My friend noticed I was upset. When I explained to her what was wrong, she reassured me that it was okay to react this way. She helped me to realize how sad I was, and how my mind was protecting me from breaking down completely by erecting fences that sheltered me from the full horror of those deaths.

Yet my friend also provided an alternate perspective to simple sadness. She felt that our return to the very place where so many Jewish people had died gave honor to their memory. Through learning Torah and performing mitzvot n this very place, we testified that our people had survived. My friend was the catalyst for my slow transformation. She planted the first seeds of change in my mind. I began to see that I wanted to change because of what I had seen. I wanted to become a better person in order to honor those that had died. I didn't want their death to be in vain.

The very names of these places cause a lump to form in my throat that is part fear, part pain, and part revulsion. Next to the first train tracks that led to the area are hand-drawn, eye-witness pictures of Jews pouring out of the cattle cars and being rounded up for selection. A stone on which someone had painted 'Am Yisroel Chai’ -- ‘The Jewish nation lives’, had been placed on the lone car that stood there as a memorial. There was one more sight there worth noting, and it was by far the most dreadful. It was a bright yellow house right in front of the tracks. It made me angry at first. How dare they decide this was the best place to live in a big cottage painted the color of a rising sun? But then my anger dissolved into pity. What sort of life must they live if they had audacity or numbness or just plain stupidity to build a cheerful looking home next to a place of utter horror?

Birkenau was huge. It was literally miles wide by miles long. The gas chambers and crematorium were hidden, separated by a forest and large spaces. Jews stumbled off trains, were herded into lines and inspected, before being sent to have picnics prior to their deaths. That's right, picnics. The Nazis would give the children food and assure their mothers they would be taken care of before taking them off for "a shower". Then they would force other Jews to burn the bodies and throw the ashes into ponds outside. These ponds were one of two ghastly scenes from Birkenau that had the strongest impact on me.

The ponds looked so peaceful, and yet they symbolize what the Nazis did perfectly. They murdered and slaughtered innocent people, and then treated those peoples' remains with complete disrespect. Afterwards they tried to make their murder more tasteful by masking it with clinical language and false fronts. They dubbed their mass killings "extermination" and "liquidation". They called their cattle cars, packed with starving, thirsty crowds, "deportation" and "resettlement". They threw ashes of humans into calm, serene ponds.

The second place that affected me strongly was the location of the latrines. It was just a block of cement with two lines of holes housed in an ascetic hut. Hundreds of prisoners were rushed in at once and given ten minutes at most, no matter what their condition. I don’t think I'll ever be able to go to the restroom again without thanking God for His many kindnesses.

In Auschwitz I walked under the famous sign, 'Work makes you free'. Hidden between two barracks was a single wall where they shot 18,000 individuals. One barrack contained all sorts of things that the Nazis had taken away from people. Horrifying mounds of hair lay behind pristine sheets of glass. Carefully labeled suitcases created haphazard towers. Pots, pans, and cups formed a mosaic of lost kitchens. And then there were the shoes. Thousands of shoes. Both in Auschwitz and later in Majdaneck, the shoes made my heart clench. They were all shapes and sizes. Most had faded to a dusty black brown, most were rotting pieces of decrepit leather, but some were still colored, some were still whole. Small children’s shoes. Red heeled shoes. Sandals. Work boots. Laced, buckled, and slip-on. These shoes spoke with their silence. Where is my mother, my father, my brother? I tucked a bit of their soundless shrieking into my heart and bit my lip as I turned to go.

I left Auschwitz as the sun was setting. It was time for afternoon prayers, and I prayed right there. In front of the gates of Auschwitz I spoke to God. This was more than just a statement of revenge. This was a battle cry for the future: I don't care what they did; I will do what is right. Nazi terrorism had failed to eradicate the eternal prayer song of the Jewish people.

Majdaneck was smaller than Birkenau, but it was equally difficult to handle. Standing next to ovens that burnt skin and bones was surreal and deeply chilling. Equally chilling were the showers, which sometimes froze and sometimes burned, both alternatives preferable to the other showers, the ones that rained Cyclone B death.

In Majdaneck again it was the containers of shoes that staggered me. I kept thinking, they probably never thought about their shoes. Why would they? They were just shoes. Yet to me they are so much more. They are a connection to those who stepped or danced or ran in those shoes. They symbolize life gone. As I marched away from the containers and toward the buses I thought of Nazi boots crunching their way on this ground, and the soft, tired stumbling of prisoners. I swallowed hard. Since we can't undo what's been done by others, we can only make a better future ourselves.

I am living proof that the Nazis were wrong.

Poland was all about loss. Back in Israel I can’t help but overflow with gratitude at being here now. I'm not depressed by what I saw, though much of it was sad, and terrible. I'm proud that I'm a Jew and carrying on our traditions. I am living proof that the Nazis were wrong. Their meticulously planned experiment failed.

My challenge is not to hide in a forest so that no one will know I am Jewish, or even to walk proudly into a gas chamber. My challenge is to pray even on the days when it seems like there is nothing to pray for. My challenge is to choose to the correct path, when it’s easy to choose any direction. This is what I have taken away – a respect for the past heroes and all their trials can teach us about becoming the heroes of today, by carrying on their legacy.

Atara Gedalowitz is 19 years old. She is originally from Silver Spring, Md. and is currently spending a year in Israel studying Torah at Darchei Binah Seminary in Bayit Vegan. She plans to become a teacher and a writer.

Jewish Mothers in the Holocaust
Scientific Curiosity and the Divine Encounter
Mind Over Milkshakes
Love the Convert
Comments
MOST POPULAR IN Israel
Our privacy policy
Aish.com Is Looking for Great Writers