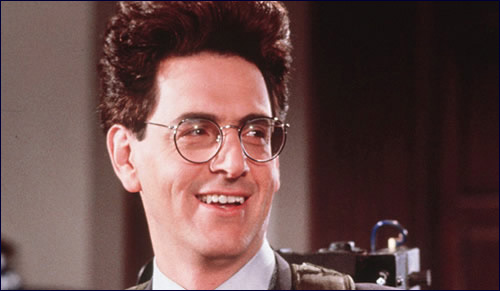 The writer and director of Groundhog Day passes away, leaving behind a legacy of funny, thoughtful films.

In some ways, Harold Ramis, the Jewish filmmaker who died on February 24, 2014 at age 69, was the quintessential Hollywood insider. His many hit movies – including such classics as Caddyshack, Meatballs, Stripes, National Lampoon’s Vacation, Groundhog Day, Analyze This, and Ghostbusters (which he starred in, playing the hilarious Dr. Egon Spengler, as well as co-wrote) – defined a generation of comedy.

Yet Ramis rejected the trappings of conventional Hollywood success. He started his comedy career as an unknown with Chicago’s Second City comedy troupe. (He was a reporter with the Chicago Daily News at the time, which sent him to report on the comedy group. After watching them perform, Ramis knew he found his calling, and started writing comedy, eventually ending up back at Second City as a member.)

At the height of his fame, Ramis turned his back on Hollywood, returning to his hometown of Chicago to live in a Jewish suburb.

Years later, at the height of his fame, Ramis turned his back on Hollywood, returning to his hometown of Chicago and moving his production company from Los Angeles to the small, residential, Jewish suburb of Highland Park, Illinois.

“He’s the least changed by success of anyone I know in terms of sense of humor, humility, sense of self,” Second City co-founder Bernie Sahlins said of Ramis at the time. “He’s the same Harold he was 30 years ago.”

Ramis himself explained that while he enjoyed life in Hollywood, he found the environment harmful. “In L.A., you’re much more aware of an artificial pressure, just that you’re in a race of some kind. You know, if you’re not moving forward, you’re dead in the water, because everyone around you is scheming, planning and plotting to advance themselves, often at your expense,” he explained.

“I’ve compared it to high school: Am I popular? Am I cool? Am I in? Who’s the in crowd? How do I get into that party? These are not things I ever wanted to worry about. Here (in the Chicago suburbs) I’m so liberated from that.”

After his first marriage ended in divorce, Ramis married for a second time, and started asking himself questions about what he wanted to do differently in his marriage. He realized he wanted to move back to his hometown, to be closer to his parents. “I wanted them to know my second family,” he recalled. “I’d been married before and been away all those years and thought this was a chance to reunite my family.”

Getting the chance to do things differently a second time (and a third, and fourth, and fifth time, and more) is the subject Groundhog Day, my favorite of Ramis’ movies. (Stephen Sondheim said he wouldn’t attempt a musical adaptation of it because it was impossible to improve on perfection.)

Groundhog Day tells the story of Phil, a weatherman played by Bill Murray, who is sent to Punxsutawney, Pennsylvania to cover the annual Groundhog Day festivities there. Grumpy and unfulfilled in his personal and professional life, Phil can’t wait for the day to be over. But instead of waking up the following morning, Phil awakens on the same day, over and over and over.

At first, he’s horrified by this bizarre circumstance, then depressed. In time, he learns to make use of his endlessly repeating day: he learns French, memorizes poetry, and becomes a piano virtuoso. Only when Phil has finally changed himself – working on his character traits and becoming a better person – does his endlessly repeating day conclude, allowing him to move on with the rest of his life.

Ramis’ genius in this movie is in tapping into a fantasy many of us have: if only we could have another chance, we’d be able to perfect ourselves, to finally become the people we suspect we’re capable of being. This is a profoundly Jewish concept: we each have a mission in life, and we’re each given the tools we need to accomplish it; it’s up to us to use our skills to the best of our ability. And we have the power to do teshuva, regret our misdeeds and start over.

Groundhog Day came out three years before Ramis made sweeping changes in his own life, trading the glamour of Hollywood for a staid Chicago suburb, and making the decision to direct all his subsequent movies from his new base instead of Hollywood. Perhaps his own struggle informed the movie and gave it its sense of urgency.

Five years before Harold Ramis’ long final illness and death, a friend of mine, Cindy Sher, editor of the JUF News, spoke with him about his life work. Cindy singled out Groundhog Day as a special film, too, telling Ramis that at least once a week, she heard someone mention its universal themes. Ramis responded that he considered it, along with two other films he made, to be “about what it really is to be a good person in general.”

“Groundhog Day,” he explained, “is about how we use our time and priorities, losing our narcissism and vanity, taking a good look at others, and being in the moment.” His movie Multiplicity “is about the divided self, the things that pull us in different directions and how can we integrate ourselves and be one person.”

Finally, Ramis singled out his later movie Bedazzled as one of his more meaningful projects; it “is about the things we wish for that we think will make us happy, like money, fame, success, power, good looks – all those things that we think are the keys to happiness,” Ramis said, cautioning that “of course the film ends up saying that’s not where happiness comes from.”

When he thought of what he wanted to pass along to children, he said, it was “integrity.” Throughout his life, Harold Ramis searched for the things that make us happy. His movies showed us that the best things in life cannot be bought.

Star Trek and God
Faith: the Axis Upon Which the Wheel of Science Turns
Love - Not Just About Chemicals Anymore!
Is There a Moral Code in a Virtual World?
Comments
MOST POPULAR IN Jewlarious
Our privacy policy