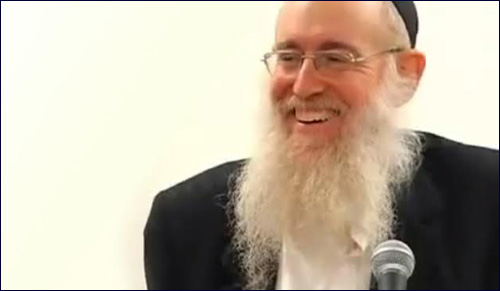 Aish.com author awarded for radiating the power of joy.

The Happiness Hall of Fame boasts among its inductees Deepak Chopra, Muhammad Ali, and a pantheon of authors, sports stars and inventors.

Plus one rabbi: Zelig Pliskin of Aish HaTorah.

How did an observant Jew from Baltimore become a leading expert on joy?

"Classical Jewish sources speak extensively about happiness," says Rabbi Pliskin, "starting with the Torah itself which instructs us to 'rejoice in all the goodness that God has given you' (Deut. 26:11)."

When Pliskin was 12 years old, quarterback Johnny Unitas led his hometown Baltimore Colts to an overtime win in the NFL Championship Game. "That was a huge thrill at the time and connected me with the power of joy."

He realized, however, that it was a superficial joy. One year later, the famous Ponevitcher Rav, Rabbi Yosef Kahaneman, attended Pliskin's Bar Mitzvah in Baltimore. Rabbi Kahaneman had built numerous schools in his native Lithuania – which were all destroyed in World War Two. "Despite the hardships he endured," Pliskin recalls, "his entire being radiated with overflowing love and joy. I remember the way he hugged my father, and this became my lifelong role model."

Joy releases spurts of positive chemicals in the brain.

Pliskin applied himself diligently to the task of mastering happiness. "Happiness is a skill that can be learned," he says. "Maimonides wrote nine centuries ago that the way to develop any positive trait is to practice doing that trait over and over again. When it comes to happiness, the more a person does positive acts of kindness, the more joy becomes part of our nature."

Pliskin cites research that joy sparks the production of four "pleasure chemicals": Dopamine, Serotonin, Oxytocin and Endorphins. "When you speak and act joyfully, you get spurts of those positive chemicals in the brain," he says.

Pliskin discovered that with mental discipline, he can frequently access positive states. "I assign code names to my most positive and meaningful experiences – then can access that joyful state anytime, anywhere." (His groundbreaking work on "collecting states" was featured in the NLP journal, "Anchor Point.")

Rabbi Pliskin's happiness career began in earnest in 1974, when Rabbi Weinberg started Aish HaTorah with the motto: "We'll teach you how to be happy." Rabbi Pliskin became one of Aish's first teachers.

A few years later, he compiled his best "joy tools" in a practical guide, Gateway to Happiness. The book became a classic for those seeking to increase their level of happiness, peace of mind and self-esteem – while decreasing negative emotions such as sadness, anger, worry, and anxiety.

Lionel Ketchian, founder of the Happiness Club with over 100 branches worldwide (including one that Rabbi Pliskin leads in Jerusalem), calls Gateway to Happiness "the most comprehensive book on happiness I've ever read."

What is Rabbi Pliskin's number one tool for living in a constant state of joy?

He explains: "The secret is an 8-word mantra. Joyful thoughts. Joyful feelings. Joyful words. Joyful actions. By repeating these words enthusiastically, 10 times a day for 5 seconds, you can constantly upgrade your attitude and become a master of happiness." 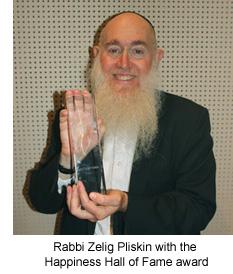 "Rabbi Chaim Shmulevitz taught that we always have something to be joyful about," he says. "If a person's glass object would fall and break, and at that moment they receive the news of having won the lottery, would they be upset about the glass breaking? Of course not. So too, the joy of being alive should override anything we may find to complain about."

"Whenever I need a quick pick-me-up, I smile and wave to the mirror. It always smiles and waves back to me!"

Rabbi Pliskin's distinguished career includes lectures around the globe, the popular "Daily Lift" series on Aish.com, and dozens of books on topics of self-improvement.

Though not one to be wowed by honors, Rabbi Pliskin sees the Happiness Hall of Fame "as good publicity to positively impact people's lives," and acknowledges that the award "would make my mother proud."

Pliskin is being inducted in November 2015 with a distinguished group that includes three-time Super Bowl champion Bubba Paris. "We could form a happiness team and call it Bubba and Zeidy," he jokes.

In his Hall of Fame acceptance speech, Rabbi Pliskin delineates "Nine Habits of Happiness," culled from decades of joyful living. Watch it below:

The Road to Resilience

Connection with Eternity: Ethics of the Fathers, 3:15