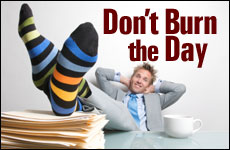 Dave Matthews, two funerals and one wake up call.

This week I had the unusual experience of being asked to officiate at two funerals. While never exactly enjoyable, I find that they are reflection opportunities bar none. Nothing is quite as sobering as witnessing that final brief journey from surface to deep six.

One of the relatives, a kind man in his seventies, looked me in the eye just after and noted, “Rabbi, that’s going to be me someday. How am I supposed to process that?” My first thought was Man, it's late in the game to start mulling this one over. And my second was, But good! Better late than never.

On my way home I slid open my Ipod and hit shuffle. There is a particular tune that always seems to pop up when I’m in a contemplative mood. It’s by Dave Matthews and it’s called Pig. This verse caught me:

What if a great wave should wash us all away?
Just thinking out loud
Don’t mean to dwell on this dying thing
But look at my blood
It’s alive right now

I don’t know all that much about Dave Matthews and I don’t want to make him out to be some great philosopher, but I think he really hits something deep in this song. Counter-intuitively, I end up feeling strangely alive and happy after confronting the ultimate conclusion of the human experience, and I know now that the two concepts are intrinsically linked.

I end up feeling strangely alive after confronting death.

In Ecclesiastes, King Solomon informs us that it is better to go to a house of mourning than to one of feasting. Why? Because the party, while briefly fun, generally serves to mask our ongoing battle with reality. Being forced to look death in the face is like acquiring a mental scalpel that invariably causes us to slash away all of the pettiness and superfluities of our day to day lives. With those gone, we start to deeply appreciate life.

I think this is what Dave means when he sings “don’t burn the day” – don’t waste your precious time fixated on that which is unimportant and saps all of our energy and joy.


Rabbi Noah Weinberg, of blessed memory, would drill into us “the battle for life is the battle for sanity” –theories are all fine and good but until we are able to live them, to put into practice what we profess to hold dear, we are not truly alive. It’s this tendency to forget, to lose inspiration, that makes integration of expanded consciousness so bedeviling.

Sometimes we can go for weeks or months riding a wave of growth and internal achievement only to slam headlong into a wall of humiliating failure. I had such an experience last week where I not only burned the day, I charred it and it left me feeling physically ill. The trick when we hit those turbulent patches is to strive to remember what's intrinsically important in life.

The Talmud tells us that when we feel our “evil urge” overpowering us we should say the Shema, a profound meditation on the Unity of the Creator, thereby helping us to stay focused on what is right and good. If that fails we are encouraged to remember the day of death. There we are again, with that splash of cold water meant to jolt us out of our ethical apnea.

It would be understandable to view this all as rather morbid – but it’s not. It’s actually quite life affirming. Unfortunately it's just not possible to live life to the fullest until we have fully embraced the totality of what it is, for better or worse. We spend so much of our life pretending that we belong to a special club of people who do not age, do not suffer and do not die. We are in for a series of rude awakenings.

To the very end and beyond, it’s all about love.

The point of the Jewish burial and the seven-day mourning period is specifically to focus the mourners on the loss so that they can experience it deeply, process and then move on. It’s actually forbidden to mourn any more than one full year. At that point the beauty and joy inherent in all of creation must once again become dominant.

Judaism considers sadness to be a bad character trait. We allow for broken heartedness, but never despair or depression. That would be tantamount to a denial of reality, the reality that the universe and everything in it is good. (Here’s the algorithm: God is infinite + God is good = Everything is infinitely good.) Even death is called good, as the Midrash teaches: four of the days of creation are described as "good," except for the sixth day which is called “very good.” What is the “very” referring to? Amazingly, to the day of death.

This is why we temper our mourning. Because even the darkest moments are predicated on the goodness and love of the Creator. Even that final, mysterious journey is for our good.

To the very end and beyond, it’s all about love.

Love, love, love, what more is there?
‘Cause we need the light of love in here
Don’t beat your head
Dry your eyes
Let the love in there
They’re bad times
But that’s okay
Just look for love in it