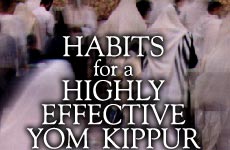 Take one step in breaking free from the entanglements of negative habits and you're guaranteed assistance from the Almighty.

Why does Rosh Hashana, the Day of Judgment, come before Yom Kippur, the Day of Forgiveness? Shouldn't we first be forgiven for all the past sins, repent, become a new person on Yom Kippur, and then have a better chance on Rosh Hashana of getting a good judgment and a sweet year?

The answer lies in properly understanding the nature of judgment on Rosh Hashana. We are not being judged on our past actions, but rather on our vision, plan, and desire for the upcoming year. Rosh Hashana reenacts the creation of mankind (see New Beginnings), when there was no past to speak of. Based on what we truly want on the first day of the new year, we are granted the spiritual and physical potential for the upcoming year.

Once we have our newfound ambitions clear and our goals mapped out, we are ready to set our sights for Yom Kippur. It now becomes much easier to buckle down to do the hard work of changing and correcting the faults that prevent us from reaching the goals we committed to on Rosh Hashana.

That's what we would look like if we suddenly had to change ourselves and correct our mistakes if Yom Kippur came before Rosh Hashana -- we would still be on the wrong train, in the midst of the past year with our skewed vision, discouraging attitudes and past failures. Our repentance would be merely cosmetic.

It's only after Rosh Hashana, that day of reconnecting with our goals and destination, do we figure out who we are and where to go. Only once we know we're on the right train headed for our desired destination can we face Yom Kippur and work on removing the obstacles that keep us from reaching our goals.

THE PROBLEM OF HABIT

But we have a large strike against us in starting anew: habit. As much as we have risen above our past on Rosh Hashana and attained a clear vision of the life we so desire, the day after inevitably comes and we often find ourselves right back where we left off before Rosh Hashana.

"Like a car, if you suddenly shut off the engine while in the middle of driving, the car continues to go in the direction it was going in, out of habit, even though the motivating power was shut off"(Sifsei Chaim I, Rabbi Chaim Friedlander, page 59).

"If a person chooses to defile himself a little, he ends up becoming very defiled. When he chooses bad down below, he is led in the direction of bad from above."
(Talmud Yoma 39a)

Apparently, when we persist in negative behavior patterns, we are actually creating a certain spiritual reality that "assists" us and motivates us to continue merrily on our chosen wrong path.

It seems we are in a bit of a bind. How do we shake off the habits we've drilled into ourselves for years? How do we loosen the hold of the "spirit" that compels us to take pleasure in speaking ill of people, that desires to continue to be selfish and lazy? There is all that energy which we have created with our own choices this past year that entices us into continuing negative habits. We cannot simply hope it will evaporate and fade away. Is there a way out?

That same discouraging quote from the Talmud mentioned above tells us a few lines later that behavior modification can work both ways:

"'And you shall make yourself holy and you will become holy.' [We learn from this that] if a person sanctifies himself a little bit, he becomes very sanctified. When he chooses good down below, he is assisted and led in a good direction from above."

We can combat the habit problem by breaking our routine during the Ten Days of Teshuva. Do things you're not used to doing: Wake up a half hour earlier every day. Eat kosher food according to a stricter standard than you do during the rest of the year. Just for the week, don't talk to the friends who normally get you started on the latest gossip. Study a book of wisdom for ten minutes a day. Get a new positive habit going.

By undertaking a change during the week between Rosh Hashana and Yom Kippur, you're not only committing yourself to a small bite-size change, you're also breaking a habit and adding tons of positive energy to your record that will motivate you to go further in the right direction. You'll be slowly putting the car into "park" and firmly pulling up the hand brake.

THE "GOD IS YOUR SHADOW" TRICK

"Rabbi Huna the son of Rabbi Yehoshua became very ill. Rabbi Papa saw he was dying and said, "Prepare for him clothes for the journey (shrouds)." In the end, Rabbi Huna got better. Rabbi Papa went to see him and asked him, "What did you see in the next world?" Rabbi Huna replied, "I saw that death was decreed upon me but God said to the prosecutor, 'Since he is not exacting and lets things pass, don't be so strict with him.'"

As it says: "He carries the sin and lets bad deeds pass. For whom does He carry the sin? For those who let bad deeds pass them by"
Talmud, Rosh Hashana 17a

Our actions in this world directly affect the kind of response we merit from God. Rabbi Huna was saved from death because he was "maavir al middosav" -- he was easygoing. Since he wasn't strict with people, forgoing his honor and "letting things pass," God decided that He, in turn, wouldn't be so strict with Rabbi Huna. He would "forgo" the decree even though it might have been deserved.

If we can adopt this particular approach, we are assured that God will respond in kind when meting out judgment and determining which book to seal us in for the coming year.

Let's try to be patient and forgoing. Don't get upset about an insult, don't be too prickly and sensitive when parents (or in-laws) criticize, don't let anger overcome you when your children, students, colleagues don't immediately (or ever) listen to you, don't demand or expect too much from a spouse, roommate or friend. In general, chill out a bit, and God won't be too exacting in return.

Who knows? Maybe we'll develop new habits that will encourage us to be less critical and judgmental and more loving and accepting all year round. 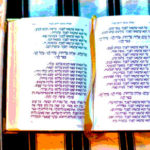 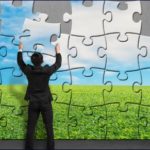 How to Make a Yom Kippur Breakthrough6 min read 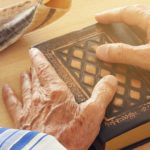