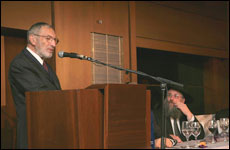 I did not merely have a rabbinical relationship with Harvey Hecker. I felt like his adopted son. Our relationship spanned over 30 years and we partnered in doing our best to impact the Toronto Jewish community and beyond

Mr. Hecker was not just a good man; he was a great man. Over the last 30 years he was one of the most important people in terms of changing the reality and landscape of the Jewish people. There are thousands of people whom he directly impacted, plus hundreds of thousands (if not millions) who do not realize how deeply he affected their lives Jewishly.

Let me take you back 32 years. Harvey Hecker was a tremendous success – chairman of one of the top accounting firms in Toronto, which was part of an international corporation. Professionally, he was known around the world. He was married to his life partner, Sheila, and had three wonderful children.

Through his son, now Prof. Joel Hecker, Harvey was introduced to Aish Toronto, and eventually to Aish Jerusalem and Rabbi Noah Weinberg, of blessed memory, who taught him the following messages:

Aish in 1981 had big dreams and many twenty-something rabbis who wanted to make a difference. But we were disorganized and, honestly, could not be called a professional organization.

He turned us into a viable and professional organization.

Mr. Hecker wanted to help and teamed up with Rabbi Weinberg to take Aish's dreams and turn them into reality. He did this by organizing us, by supporting us, and by turning this into a viable and professional organization.

He felt that all his professional training and business success was really a preparatory phase for changing the state of the Jewish people.

The first lesson for us is to realize that Harvey Hecker discovered this mission in his 50s. Who knows what undiscovered missions are available to each of us! We need to keep our eyes and hearts open to the opportunities the Almighty sends to each and every one of us.

Mr. Hecker became our mentor. I remember as a 27-year-old rabbi being asked to study with him. You can imagine the trepidation of having to “teach” someone with so much more life experience and success. I was amazed by his humility and the respect he showed me and others. As I look back, it amazes me how much he believed in us, encouraged us, and saw our potential.

The second lesson we learn from Harvey Hecker is how important it is to take young people seriously, and do what we can to help them realize their potential.

The Talmud teaches that the Patriarchs are known by the Hebrew term Yasharim. The concept of Yashar (being straight) has many aspects. To begin with, the term refers to integrity and honesty. Mr. Hecker was the paragon of integrity. This translated into a clear message to his children and to the world that there is no compromising of personal integrity and honesty under any circumstances.

Secondly, King Solomon teaches that "God has made man straight, but they have sought to make their lives complicated" (Ecclesiastes 7:29). We are meant to live in such a way that our bodies are led by our souls and moral conscience. When we allow our bodily lusts and drives to lead, then life become needlessly complicated – i.e. no longer straight. Mr. Hecker led with his soul.

A third aspect, taught by Rabbi Naftali Tzvi Yehudah Berlin (the Netziv), is that Yashar refers to someone who lives on the highest level of being a mentsch (Derech Eretz). Someone who lives on this level will not identify a person by their weaknesses and faults. Rather he will see their essential goodness and view their faults as merely a challenge for growth. Mr. Hecker became the advisor for Aish Rabbis around the world, which meant that he constantly saw our weaknesses and challenges. Instead of becoming frustrated and judging us, he continued to believe in us and mentor us. He truly became the Rabbi's Rabbi.

The third lesson we learn from Harvey Hecker is to develop a thirst to integrate the quality of Yashar into our lives.

Leadership requires the courage to speak the truth even when it’s not popular.

Harvey Hecker was a true Jewish leader. The Torah teaches that in order to lead, one has to be a truth seeker, and like Moses to be ego-free and not compelled by honor-seeking. Mr. Hecker had no interest in pursuing honor; he just wanted to do the right thing.

In the realm of leadership, his greatest impact on me and others was teaching us that leaders do not allow themselves to be led by public or social pressure, but they require the courage to speak the truth even when it’s not popular.

Thirty years ago, the landscape of Jewish life was such that the study of Torah was not mainstream, and the message of Torah's relevance and the emergency of Jewish assimilation were met at times with hostility. Harvey and his wife Sheila did not buckle under the social pressure, but instead eventually changed the landscape around them. The fourth lesson we learn from Harvey Hecker is to learn what it means to be a true Jewish leader.

It is hard to fully describe Mr. Hecker's greatness in the realm of interpersonal relationships. As young rabbis we may have been trained as educators, but we had not been trained to be managers, to work with boards, or to navigate difficult situations and relationships. Dozens of rabbis from around the world constantly sought his council, and he was inevitably correct in his judgments and advice. He taught us how to lovingly and calmly deal with people appropriately.

The fifth lesson is to realize how we can change the world through pursuing greatness in the realm of interpersonal relationships and communication.

Thirty years ago if one looked superficially at Rabbi Noah Weinberg and Harvey Hecker one would not have been able to imagine an odder looking pairing – a genuine Odd Couple! Rabbi Weinberg was larger-than-life, white-bearded, Brooklyn-accented. Mr. Hecker was a sophisticated, urbane, and gentle Canadian. Superficially they appeared to come from such disparate backgrounds, yet they formed one of the great partnerships in Jewish life. Together they built an organization that today touches the lives of approximately one million people per year. While Rav Noach might have been the fierce warrior, Mr. Hecker was the gentle warrior, and together they worked tirelessly. They put the Jewish people on their shoulders and lifted us into a higher reality.

In my mind's eye, I see Rabbi Noah Weinberg welcoming Mr. Hecker into Olam Haba, and saying "let's work together to advocate for the Jewish people and the world." May their memories be a blessing. May Sheila and her wonderful family be comforted amongst the mourners of Zion and Jerusalem.

Rabbi Ahron Hoch is the rabbi at The Village Shul and Aish HaTorah Learning Centre in Toronto. He leads a dynamic, vibrant institution which has developed a reputation as a leader in family-oriented programming (such as the Jewish Family Institute) in the downtown Toronto area. Rabbi Hoch’s educational direction and insight has contributed greatly to the renaissance of Torah activities in Toronto.

John Lennon, My Father and Me: Imagine and Jewish Universalism

SS Guard who Fell in Love with a Jew in Auschwitz
Lessons from the Book of Jonah
Where Are We? The Body, Brain, Soul Problem
Dr. Sheila Nazarian’s Escape from Iran
Comments
MOST POPULAR IN Israel
Our privacy policy
Aish.com Is Looking for Great Writers