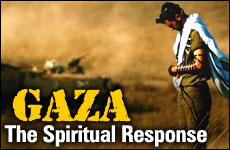 How you can join the battle.

We’ve heard a lot about the incredible success of Iron Dome, Israel’s anti-missile system that has successfully intercepted hundreds of Gaza rockets.

In Hebrew, the word for “dome” is kippah – the same word used for the Jewish head covering.

In Judaism, the physical and the spiritual comprise two sides to every battle.

The Midrash relates that during the Jewish war against Midian (Numbers ch. 31), every soldier that went out to battle had another person designated to pray and study Torah for him.

Similarly in the days of King David, the uniquely Jewish two-pronged attack consisted of weapons and prayer (Talmud – Makkot 10a).

Maimonides writes that it is a mitzvah to pray during troubled times. Failure to pray is cruelty, he says, since that could cause things to get worse. Rabbi Moshe Sternbuch of Jerusalem explains:

If the Almighty shows us miracles and we do not respond by strengthening ourselves spiritually… then we are handed over to the forces of natural law and the missiles inexplicably will begin to hit their targets with greater frequency. That means the lives of our fellow Jews – our brothers and sisters living in Israel – are in mortal danger.

That is why we must raise our level of consciousness of God’s Presence, to the point where we become worthy of supernatural treatment.

Each of us has the opportunity to aid the Israeli war effort. A new grassroots program pairs individuals worldwide with an Israeli soldier or endangered resident. When you sign up, you will receive a soldiers’ Hebrew name.

By doing acts of kindness and praying in the name of this soldier or resident, you can add to their spiritual merit and partner in the war effort.

Everyone – young and old, rich and poor, left and right – can participate.

“People don’t understand – or don’t want to understand – how dangerous our situation is in the Land of Israel. There are threats every moment, and if God did not protect us, there would be complete chaos. Every prayer is important… God wants our prayers, so He tries to shake us up however He can, so that people will start to pray.”

These prayers will invoke in ourselves a greater awareness that it is ultimately God, and not political events, which are crucial to our welfare.

In addition, the soldiers (and their families) appreciate the reassurance that Jews around the world are spiritually supporting them. This brings about unity, connectedness and spiritual protection for the Jewish people.

Think of it as guard duty for the rest of us.

To participate in praying, or to sign up a soldier that you know, visit: www.shmiraproject.com

In the merit of joining together, may we see a speedy and successful end to Operation Pillar of Defense, with no further casualties.

He Who blessed our forefathers Abraham, Isaac and Jacob – may He bless the fighters of the Israel Defense Forces, who stand guard over our land and the cities of our God, from the border of Lebanon to the desert of Egypt, and from the Great Sea unto the approach of the Aravah, on the land, in the air, and on the sea.

May the Almighty cause the enemies who rise up against us to be struck down before them. May the Holy One, Blessed is He, preserve and rescue our fighters from every trouble and distress and from every plague and illness, and may He send blessing and success in their every endeavor.

May He lead our enemies under our soldiers’ sway and may He grant them salvation and crown them with victory. And may there be fulfilled for them the verse: For it is the Lord your God, Who goes with you to battle your enemies for you to save you.

A Letter to My Son, a Lone Israeli Soldier

Passover: Rising from the Ashes