Focus on the Positive 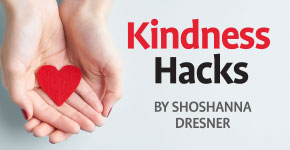 When Simon Wiesenthal was in a concentration camp he witnessed the following scenario.

A new arrival had smuggled in a siddur and was bartering 15 minutes rental of the siddur in exchange for one-fourth of a day’s meagre rations. The Jews were in a terrible state, starving, but they still willingly made the exchange.

Wiesenthal was shocked at the behaviour of the new arrival.

After the war Rabbi Eliezer Silver went to visit him. "So they tell me you are angry with God?"

The Wiesenthal replied, "Not with God, but with one of his servants," and he told him what he had witnessed.

Rabbi Silver smiled. "You are looking only at the man who took something. Why don’t you instead look at the men who gave something?! Look at all the people who sacrificed something to use that prayer book!"

The episode of the spies speaking negatively about the Land of Israel in this week's Torah portion is placed next to the section of Miriam speaking against her brother Moses. Rashi explains that the spies witnessed Miriam’s punishment, but they did not learn a lesson.

But what lesson should they have learned? Miriam spoke against a person, and the spies against a land?

Rabbi Ordman explains that one must acquire the attribute of always seeing the good in everything. Someone who finds fault with ‘things’ (meals, accommodation etc) will also find fault in people!

This is the lesson that the spies should have learned. To see the beauty in the Land of Israel.

Choose to focus on the starving people willing to give up their food to get closer to God.

Zoom in on virtues and positive speech will follow!

(Adapted from Love your neighbour by Zelig Pliskin)