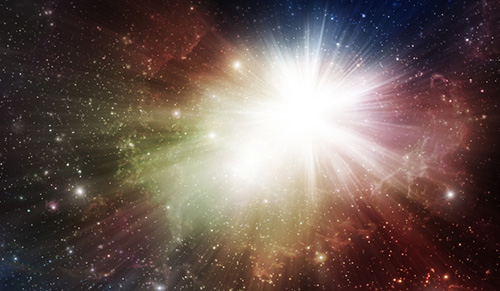 The recent discovery of primordial gravitational waves supports the Torah’s account of creation, and may shed light on the age of the universe enigma.

"Space Ripples Reveal Big Bang’s Smoking Gun," Dennis Overbye recently informed us in the New York Times. A few years ago, scientists predicted that the Big-Bang must have passed a series of phases throughout its development into its present size. The most dramatic phase, the cosmological theory asserts, was the "inflation" period which immediately after the Big Bang, caused the universe "to swell faster than the speed of light for a prodigiously violent instant." This inflationary phase, scientists predicted, must have generated gravitational waves, which should be detectable in the universe, same as the cosmic background radiation detected by Penzias and Wilson in 1964. Last week, scientists were able to identify those gravitational waves. The Big Bang was confirmed, again.

The Big Bang theory was the first time that the scientific community entertained the notion that the universe had a beginning.

In my book, Awesome Creation, I present a Jewish perspective on the Big Bang (combined with a skeptical view on our cognitive abilities to search cosmogony) based primarily on Maimonides’ world of ideas. In the first chapter, I explain that for decades the Big Bang theory was considered by the scientific community– and criticized for being – a religious theory. The Big Bang theory was the first time that the scientific community entertained the notion that the universe had a beginning. For centuries the notion of "beginning" was taboo for science; it was more comfortable maintaining the Aristotelian model of an eternal universe which kept God out of the picture. In the words of Simon Singh: “An eternal universe seemed to strike a chord with the scientific community... If the universe has existed for eternity, then there was no need to explain how it was created, when it was created, why it was created and Who created it. Scientists were particularly proud that they have developed a theory of the universe that no longer relied on invoking God.” (Big Bang: The Origin of the Universe, Simon Singh, Harper Perennial (November 1, 2005), p.79-80)

Since 1930, when the expansion of the universe was discovered by Edwin Hubble and the beginning of the universe seemed more and more evident, secular scientists like Fred Hoyle, Arthur Eddington, and Albert Einstein were frustrated. Reflecting on this sentiment Robert Jastrow wrote: “For the scientist who has lived by his faith in the power of reason, the story ends like a bad dream. He has scaled the mountains of ignorance; he is about to conquer the highest peak; as he pulls himself over the final rock, he is greeted by a band of theologians who have been sitting there for centuries.” (God and the astronomers. Robert Jastrow, W.W. Norton and company, New York/ London, 1992. 104-107)

In his book A Brief History of Time, Stephen Hawking summarized in one sentence the reason naturalistic scientists resisted a scientific theory which posited a beginning for the universe: “[s]o long as the Universe had a beginning we could suppose it had a creator.” (Stephen Hawking: Black Holes and Baby Universes and Other Essays (1993) pages. 133-135.)

These scientists rejected the Big Bang theory and tried finding an alternative cosmological model which would circumvent the idea of beginning and still be compatible with the proven expansion of the universe. Contemporary theories include the multiverses theory ("our universe is just one universes among a multitude universes, which spontaneously begin from time to time, therefore, a beginning is not a singularity but a natural, not supernatural, generative force in the universe"); the Big-Crunch or the Oscillating universe ("our universe had a beginning in time, but it will eventually shrink, crush and start again, so there was never really an absolute beginning") or Hawking's no-boundary universe ("the universe is like the North Pole, which does not have an end or a beginning"). These theories, with no factual evidence to support them, were formulated with one main goal in mind: avoiding the uncomfortable question posed by the problematic idea of beginning, i.e., Creation.

These 13.5 billions of years might not be the time that elapsed since creation but the time that was produced at the phase called “inflation.”

In light of the increasing soundness of the Big Bang theory, scientists like Stephen Hawking appealed to the "time-factor," to conveying the perception that the Big Bang model is a God-excluding theory because it postulates that the world is 13.5 billion years old, and not 5774, like Biblical religions believe. His argument was very effective. Many religious people believe today that the Big Bang opposes religion because of the pivotal differences regarding time since Creation, overlooking the unlikely correspondence between the first word of the Hebrew Bible, bereshit, (in the beginning) and the main novelty of the Big Bang theory – namely that there was indeed a beginning.

In my book I explore some alternatives to solve the time-difference enigma: the age of the universe postulated by science vs. the age that Jewish sources attribute to the world.

The 13.5 billions of years might not be the time that elapsed since creation but the time that was produced at the time the Universe was created by God. Obviously, the Creator did not need a Big Bang to generate the expansion of the universe. And gravitational waves might be nothing but the echoes of God’s initial act of creation. Thanks to modern scientific progress we are getting closer to a better understanding of Bereshit. And perhaps, to solving the science vs. religion time-difference enigma.

Born in Argentina, Rabbi Bitton received his rabbinic ordination from Israel's Rabbinate and his dayanut ordination from Rabbi Obadiah Yosef and other leading Israeli rabbis. He recently published his first book in English “Awesome Creation: A Study on the First Three Verses of the Torah.” Rabbi Bitton currently resides in Manhattan Beach, Brooklyn, serving the Sephardic community of Ohel David uShlomo.

The Song of the Dog