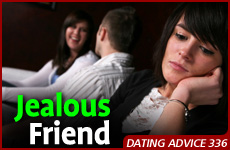 Sara and I have been dating for six months, and have serious intentions of getting married within the year. She is a very kind, warm-hearted person, and treats me well. My parents have met her and they like her a lot. I believe she can be a great wife and mother. However, I'm worried about a problem that may get in the way of that happening.

Sara has a close friend who seems to resent our relationship. Since we started to date, the two of them have had a few arguments centered on the fact that Sara doesn't have as much time to spend with her friend as before. I sense a lot of negative jealousy coming from this friend.

I'm also concerned that this friend is a bad influence on Sara because she constantly invites her to go out to bars and clubs – places that aren't part of our lifestyle. As you can sense, I'm also not very comfortable with the friend's personality.

I don't want to be overbearing, but I think it would be much better for our relationship if Sara put some distance between herself and this friend. How do I go about asking her to do this? How concerned should I be about the influence this friendship could have on us in the future?

Yours is the second letter we received today on the subject of jealousy, so it’s obviously an important topic to discuss. You're right that it can stifle a relationship from moving forward. And for this reason we are concerned for all three of you – the friend, for not being able to deal with this change, Sara, for possibly feeling she can’t move forward in life because of the friend’s jealousy, and you, for having this stumbling block placed in front of a relationship that seems to have great potential.

We usually see two forms of jealousy cropping up during dating. You've described one of them – a close friend or relative resents a dater's growing closeness with another person. They feel bad that they don't get to spend as much time with the other anymore, or that someone else is becoming their friend's confidant. They may feel they're losing a closeness they’ve depended upon.

A friend may try to sabotage the relationship.

Sadly, such a person is suffering so much from these changed dynamics that they have trouble being happy for their friend’s new-found dating success. They can only focus on their own loss and may try to recapture the friendship they see slipping away. They may start arguments and accuse the friend of being disloyal, or try a manipulative way to break up the courtship. They may say to the friend, "I don't want to go to the club alone – come with me," in an effort to sabotage the relationship by giving the couple a reason to argue.

There's often another reason for this jealousy. The friend may wish that she, too, was dating someone seriously, and resent Sara for being so fortunate. Sara may sense this, and be sympathetic to her friend's feelings. It sounds like you may be worried she'll feel guilty to have been the cause of her friend's distress, and may start to pull back from you.

Unfortunately, this sometimes happens. A dater can find it so difficult to bear a friend's (or relative's) jealousy that they back away from a promising relationship. Or, they continue to allow the relationship to develop but carry around an internal conflict about the way it’s affecting their friend.

Most of the time, daters understand that when they are developing a deep relationship leading to marriage, their other relationships will change. They will have less time to spend with friends and family, and they'll focus more emotional energy on this new person in their life. Their old friendships may not be as intense as they once were, because they are developing a new, emotionally intimate relationship. The Torah's directive to “leave one’s parents' home and cleave to a spouse” describes an emotional closeness as much as a physical one.

One of the challenges for some in the dating/engaged/newlywed stage is learning how to balance time together as a couple, with pre-existing relationships. They also have to figure out how to handle friends or family a spouse may not get along with. Like every other couple, you and Sara will learn to do this by working together.

That's why you need to talk over your particular situation together. Experience has shown us that, most of the time, the best way to deal with a third party's jealousy is as a couple. We suggest telling Sara you'd like to talk about a sensitive topic and set aside some un-pressured time for your discussion. Your objective is to describe what you've observed, explain why you're concerned, and brainstorm about how you can address the issue together.

I've noticed something about your friend, Jane, that I think is important for us to talk about. You and I have been seeing each other a great deal, and I can understand this is hard for her. She doesn't get to spend as much time with you anymore. I see she gets upset that we are spending time together, and I'm concerned this will affect our relationship. Let's brainstorm and figure out what to do about this.

This approach will enable you both to view this as an issue that affects you together. There are several advantages to this, the main one being that you’ll provide emotional support to each other and will maintain your connection while Sara tries to address the problem. You also may have ideas that she won’t have thought of.

As Sara expresses her own feelings about the situation, you may discover that the jealousy has been hard for her to deal with, too, in which case she may appreciate your sensitivity and concern about the situation. It's helpful to keep in mind that the friendship between these two women took years to build and may be a healthy one if not for the jealousy. And, if it's not a healthy friendship, that may come out during your discussion.

The most obvious way to address this situation is that Sara will talk to Jane, expressing empathy for her feelings, and understanding of the fact that they’ve been friends for a long time, and she’s now done something to alter that dynamic. Sara may not even be aware that while she has focused her attention on your relationship and is experiencing the joy of having found the man she may marry, her friend feels left-out and abandoned. She may need to allow Jane to express how she feels, and Sara may even apologize for her role in what has happened.

A newlywed needs to be aware of the effect she is having on others.

Like many “newly-attached” people, Sara may just now realize that she needs to show sensitivity to those who are close in her life. Friends and family can often feel ignored and neglected. A “dater/newlywed” should be aware of the effects she is having on others – albeit unintentionally – and make an effort to stay connected. If Sara used to shmooze with Jane for a half-hour a day, then a voice mail or SMS can go a long way to say: “I’m busy, but thinking of you all the same.” Or, Sara might arrange to get together with Jane for lunch or a movie night from time to time.

Once Sara and Jane speak, it may not be necessary for Sara to ask Jane to cease whatever is being perceived as negative behavior, because Jane may stop on her own. If it continues, Sara may have to talk about it with Jane, or ask a third party that Jane trusts to discuss the subject with her.

Another option is for you to speak with Jane yourself. You can explain that it seems your courtship has been hard for her, and that you want to make things as comfortable as possible. Express that you hope she can make room for your relationship, just as you make room for her friendship with Sara. This may go a long way to lessening the tension between you and Jane. This probably shouldn’t be your first approach, but it may be something for you to consider once Sara has made progress with her friend.

We also believe it's important for you and Sara to talk about what may happen if this friend continues to act negatively. In that case, if Sara wants your relationship to move toward marriage, she will have to distance herself from her friend. Hopefully, you and Sara will find solutions without having to resort to this decision.

And finally, you'll notice that we didn't suggest mentioning to Sara your concern that this friend has the potential to be a "bad influence." We feel this will be counterproductive, because it will put Sara on the defensive. If it really becomes an issue (and it very well may not), you will need to discuss it at a different time.

Dating Maze #256 - Off To a Slow Start
The Promise Of The Land
Which Chat Are You On?: Parshas Behar/Lag Ba’Omer
Do You Like Slow-Cooked Food? Thank the Jews
Comments
MOST POPULAR IN Dating Advice
Our privacy policy