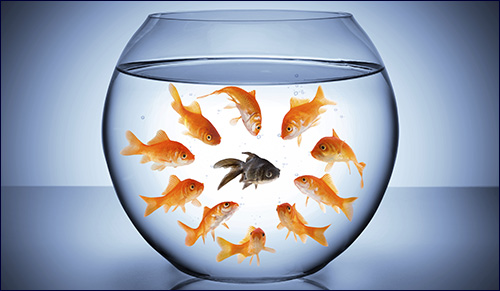 Dating and the Tinder Revolution.

Every time I date a nice guy, especially if I like him, I feel so insecure and wonder, what if he’s dating someone else at the same time? Just last month, I met a cute guy and we went out and had so much fun together. The next week, he called me and we went out again. Now it’s been a month and we’ve gone out four times. The last time I saw him, I asked him if we could define our relationship. In response, he started talking, but somehow didn’t really say anything, and I got the feeling he was probably seeing someone else. But what could I do? Everything was still so new between us, so I let the subject drop.

But here’s the thing: We have so much fun together. We get along. We click. He seems to like me a lot. I decided that everything was probably okay until yesterday when my brother went to a coffee shop and saw him with another girl. I’m afraid to bring this up with him because the conversation didn’t go well the last time; he’s obviously not ready to be exclusive with me. My best friend tells me to relax – this is just how dating is. She says it’s 100% normal for us to both date multiple people at once until we decide together to make the relationship exclusive. But I don’t want to date multiple people. I want him. I’m going nuts thinking about him dating other girls. I don’t want to lose him.

What should I do?

My friend, you are an unwitting victim of the new culture that I call “the Tinder Revolution.” Although it’s always been possible to see more than one person at a time, technology – and Tinder, where one swipes right or left to meet or reject another – is just one app of many that has made it much easier for us to encounter, get-to-know, and “communicate” with multiple people simultaneously.

However, despite the apparent benefits, the Tinder Revolution often leaves us feeling less self-confident, confused, frustrated, and empty. Why?

Everybody wants to feel special and to be treated with love and respect. Agreeing to date someone while he or she dates other people signals that it is somehow acceptable not to respect or value you. At a minimum, it is a waste of your time, as more likely than not, non-exclusive relationships peter out. At worst, you are setting yourself up for heartbreak, getting attached to a person who refuses to focus on you.

While he’s out with you having coffee, his mind could be on the dinner he had with her last night.

Ever been at a party or a function where someone is talking to you, but at the same time scanning the room looking for someone else to talk to? Someone more interesting and prettier. Someone else, just not you. Pay attention to me, you’re thinking. It is rude and disrespectful to be subject to such behavior. It is certainly not a confidence builder. Dating someone while they’re dating other people is the same thing. While he’s out with you having coffee, his mind could be on the dinner he had with her last night.

The Tinder Revolution leads to confusion. I know many people think, It’s okay if he’s dating others besides me. I can also date multiple people and still make the right choice. But it’s a mistake. Dating multiple people has significantly disabled bachelors and bachelorettes from focusing on the people sitting right in front of them. Studies show that too many options actually make it harder to choose. Contrary to expectations, providing more varieties and flavors and choices of a product to consumers is not beneficial to people and does not lead to more sales. With too many choices people can’t make up their minds and often don’t, leading to lower sales.

The same phenomenon applies to relationships. But we’re talking people here, not ice cream. When we aren’t focusing on one person at a time, we can lose the most important “sale” of our life!

The Tinder Revolution leads to frustration and emptiness. When someone is dating multiple people and not focusing on you, time is passing by. If you’re dating a guy for two months and he is still not exclusive with you, you need to take a sober look at how you’re using your precious dating time. Not one minute of those two months was focused exclusively on you, a prerequisite to really evaluating taking a relationship to the next step. But you really like him and don’t want to leave him because you think maybe tomorrow he will tell you that he wants to date you exclusively. So you hang in there with anxiety and hope while another month goes by.

Finally he tells you that he doesn’t see a marriage potential here. Perhaps, in the end you didn’t either, so no harm, right? Wrong. If you had dated exclusively, both of you would have come to this place sooner and not wasted precious time. Worse, if in fact you did fall for him, then you’re left heartbroken and empty. While there’s no magic bullet to prevent heartbreak, there is a good chance that if the relationship ended sooner you would not have fallen so hard.

How to Get to Yes

In the future, from the first date, let the guy know what you want and need: exclusivity. All right, it’s too late for that here. Even if you’ve missed your opportunity to set your boundaries on the first date, do it now. Tell him you won’t date him while he’s seeing other women. Period.

“I want to give you my full attention because I value and respect you.”

He might say, “But you can see other men!” Tell him, “I want to give you my full attention because I value and respect you. I want to be with you without the distraction of other men. If we don’t work out and wind up going our separate ways, at least I’ll know I gave us a fair shot. That’s how I date. I expect you to treat me with the same courtesy.”

And if he refuses, consider yourself lucky that you’re finding this out now, before throwing away months when you could be dating more effectively.

Don’t be scared. You’d be surprised how much a statement like that will impress and be endearing to quality guys. (And vice versa. Sometimes guys need to tell women this as well.) There’s no bigger turn-off than a woman without self-confidence. Insisting that a man date you exclusively while he’s dating you sends him the signal that you are special, that you deserve love and care and respect. You won’t scare the good ones away.

In my many years of matchmaking I’ve found that the one thing that’s gotten even the most confirmed bachelors off the fence and into marriage are women with inner self-confidence – no matter how quiet or soft they are – that insist on being treated the way they would treat their partner – with exclusive attention. It’s a sure-fire attraction.

Can I Trust My Gut in Dating?

PODCAST: Help! I’m Dating my Opposite!

How to Reduce Your Dating Jitters

The Search for a Real Man

13 Steps to Harmonious Relationships
The 21st President of the United States: Failure or Inspiration?
Hiding Their Jewishness
The Jewish Pope: Following the Questions Home
Comments