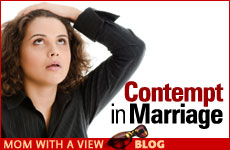 This most destructive trait can also be insidious.

I’m going to cite John Gottman again – but from a totally different angle. When discussing the types of harsh interactions that can be, God forbid, the most significant predictors of divorce, there is one trait that seems to be the worst of all – contempt.

Treating your spouse with contempt damages both your marriage (and your spouse) in ways that make it hard to recover, unless dramatic change occurs.

Maybe you’re not even aware you’re displaying contempt. Some women think it’s cute to roll their eyes when their husbands talk about how they help around the house or with the kids. Some men have no perspective on the challenges of pregnancy, childbirth and child-raising and exhibit disgust at their wife’s physical appearance or the messy state of the house.

Both sides may be behaving like their parents or their friends or even their favorite television couple. They may be doing what they believe is expected of them. (Can I just state here for hopefully the last time that it is not funny or appropriate when women refer to their husbands as one of their children!)

Contempt can be insidious. It wears the recipient down bit by bit, day by day. Unless one party finally says, “I can’t take it anymore.” And the funny thing is that their spouse is usually surprised. It’s been the status quo for so many years that no one even noticed something was wrong. On the surface anyway.

But the internal toll is incalculable. I watched a couple like this. When I met them, the husband was a quiet, slightly morose, almost non-existent presence. But after enduring 25 years of his wife’s contempt, he found the strength to fight back. Unfortunately at that point he was no longer open to reconciliation. They got divorced and he remarried. He is a different person today – outgoing and effervescent. The contempt had taken a high toll – on him and on their children.

But it doesn’t have to be like this. As mentioned in my previous article, we can change. And the earlier we make a decision to, the better. Yes, some people have a hard time changing. The more deeply ingrained the character trait, the harder it is. But what if they had tried? What if, in the early days of their marriage, this man had said to his wife, “I love you but it’s painful when you speak to me that way”? Or “I hope to be married to you for many years. We need to find a more positive way to communicate.” Or “Let’s get some professional help so our interactions will be more satisfying to both of us.”

We get stuck on our patterns – even if they are unhealthy ones. But we need to “unstick” ourselves. We need to believe in our ability to change and in the prospect of a new way of being.

Dr. Gottman is right – contempt can destroy a marriage. But it is possible to show both sides a different approach. It is possible that with sincere effort and good advice, their communication can improve. I love the column in Ladies Homes Journal, “Can This Marriage Be Saved?” If both sides are willing to put in the time and effort and really want to change, the answer would be an unequivocal yes.

Shopping with My Daughter

Marriage & Me
Near Death Experience Panel
The Western Wall: The Heart of the World
Ask the Right Question: Tisha B’Av
Comments
MOST POPULAR IN Family
Our privacy policy
Aish.com Is Looking for Great Writers