The Jewish Ethicist: Judaism and Hunting 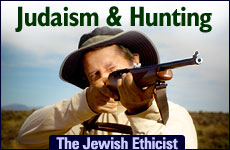 Jewish tradition has a poor regard for hunting as a pastime.

A. Hunting has been a popular pastime since ancient times, and continues to be a popular sport today. Over ten million hunting licenses are taken out each year in the United States alone, showing that hunting is one of America's most popular sports. There is no reason to doubt that hunting is on the whole a harmless sport practiced by worthy individuals. However, it is necessary to acknowledge that Jewish tradition has a very poor regard for this pastime.

The first hunter we meet in the Torah is Nimrod. The Torah tells us:

While the Torah merely states that he "amassed power," our sages describe Nimrod as a wicked tyrant who sought to usurp God.

The second is Esau, who is unfavorably compared with his brother Jacob in the following verse (Genesis 25:27, paraphrase of Living Torah translation): "The boys grew up. Esau became a skilled hunter, a man of the field. Jacob was a scholarly man who remained with the tents." As we know, Jacob became the patriarch of the Jewish people, while the progeny of Esau are often identified in the prophets with Israel's enemies.

The heroes of the Bible are generally herders, people who cultivate and nurture animals rather than merely pursue them. Abel found favor with God because of this pursuit; subsequently, all three of our patriarchs as well as King David were herders.

The Torah does not forbid hunting, and specifically refers to hunting wild animals for food (Leviticus 17:13, Living Torah translation): "If any man, whether of the family of Israel or a proselyte who joins them, traps an animal or bird that may be eaten and spills its blood, he must cover [the blood] with earth." But note that the verse is careful to specify that the prey is an animal that may be eaten; even in this case, the animal must not be killed by the hunt but rather must be ritually slaughtered like a domesticated animal. Furthermore, in this case the Torah imposes the special commandment of covering the blood. This is over and above the general prohibition on eating the blood described at length in the same passage; both have the object of ensuring that eating meet does not become a "blood-thirsty" pursuit, a danger which is greater in the case of hunting, even the permissible variety.

I believe that Judaism's approach to hunting was well summarized by the great 18th century authority Rabbi Yechezkel Landau, who was asked by a congregant if it was permissible to hunt for sport. Rabbi Landau concluded that hunting would not be considered cruelty to animals insofar as the animal is generally killed quickly and not tortured. But he concludes: I am very surprised at the whole subject; we don't find any hunters [in our tradition] besides Nimrod and Esau, and this is not the way of the sons of Abraham, Isaac and Jacob. . . There is an unseemly element in it, namely cruelty, and also a measure of danger. . . Therefore, one who listens to me will dwell securely and placidly in his house and not waste his time with such things".(1)

The main considerations involved here are the kind of character traits hunting is likely to develop or express. Certainly there is a sportsmanlike challenge in the battle of wits and wiles against animals, and when hunting is carried out in accordance with regulations it may be harmless to wildlife. Even so, the ultimate goal is to kill the prey, and as a result the pursuit risks cultivating a person's tendency to cruelty or aggression.

Hunting can also be more dangerous than other sports, and as a result doesn't sit well with Judaism's extreme emphasis on the value of human life. Thus, even in instances where there is no specific prohibition Rabbi Landau expresses concern for cruelty and danger and urges finding a more productive pastime.

The Jewish Ethicist - Should Father Pay?

The Jewish Ethicist - Slander in the Court