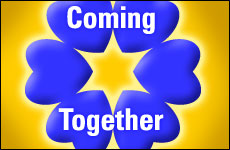 How to repair the dissolution of the Temple and its subsequent exile.

The Hebrew word "churban" – destruction or dissolution – describes the process leading to exile. As is so often the case in Hebrew, similarities between root words convey a connected meaning, sometimes expressed as an antonym. The root of the word churban shares the same letters as chibur, which means binding or joining together – indicating that the state of churban is the antithesis of chibur.

There are two basic ways to destroy a structure. One is to blast the building into nothingness, leaving no trace of the original materials that went into it. The other method is to dismember the building, taking it apart stone by stone. In the latter approach, the structure is effectively destroyed, since it is reduced to a collection of stones. But the individual pieces are still extant. They are changed only in that they are missing the adhesion that had made them into a single, unified entity before.

Churban – the antithesis of chibur – is the state of being disbanded or dissolved.

Understanding churban in terms of dissolution is implicit in the expression used by the Talmud (Gittin 53a) to describe Titus's destruction of the Holy Temple: "He ground already-milled flour." Grinding is an act of dissolution. Grain ground into flour loses nothing of its substance. For every pound of grain one has at the outset, there remains one pound of grain in the form of flour. The only difference is that the original cohesion of the particles has been lost.

Love for fellow Jews is the cohesive force that keeps the nation together.

When the latter kind of dissolution occurs to the Jewish people, churban takes place and as a result, the body politic of Jewry suffers exile. The individual particles of the Jewish people become separated from one another. True, each individual remains essentially unchanged, but the cohesive force that unites them into one klal, one entity, has been removed.

It is fitting that our current exile, which is a punishment for baseless hatred, should be characterized by the fragmentation of the nation. Ahavas Yisrael (love for fellow Jews) is the cohesive force that keeps the nation together. When Jews became separated from one another by hatred, the entire Jewish people was forcibly splintered by exile.

This explanation of churban offers insight into the well-known passage from the Talmud that states: "Whoever brings happiness to a bride and groom is considered as having rebuilt the ruins of Jerusalem" (Brachos 1b). When a bride and groom unite to build a home, no new substance is added. The bride was there before, as was the groom. New to the scene is the bond between the two, resulting in a new entity: a home. Added is the adhesive force of love, which was previously lacking in the Jewish people, and whose absence on a national scale had caused the churban.

Marriage not only represents the additional element of love, but it actually unites two dispersed Jews. Someone who helps in the creation of this bond is likened to a rebuilder of Jerusalem, for the united home is the antithesis of the churban, dissolution. The elements stand waiting for the adhesive element of love that brings them together.

Lack of adhesion is also the reason for dispersal from the Land of Israel. The shemittah year (the sabbatical from farming the land) is the link between the people of Israel and its land, for by renouncing ownership of the land, the Jewish farmer demonstrates his faith and freedom from the materialism born of land-ownership. As long as Israel kept shemittah, its bond to the land was totally spiritual, as it was meant to be. Once the Jews failed to keep shemittah, however, they broke their spiritual bond with the land. The people remained intact, and so did the land, but once that link was sundered, they – the people and the land – could no longer remain together.

The churban – the destruction of the Temple and the subsequent exile – came about through the power of dissolution. Thus redemption does not require a creation of a new entity, but a reunion of its disparate parts into one entity.

Each Jew must appreciate what his fellow Jew can offer him and not perceive him as a threat. The closeness that ensues not only serves to reunite the fragments of the Jewish people, it brings us back to our Creator and His Torah. This is the essence of our prayer on the High Holidays, "May they all form one union," representing the reunion of a fragmented Israel, and "to perform Your will with a complete heart," representing the reunion of Israel with God.

What Happened to the Jews of Arabia?
What Makes Eli Run?
The Tyranny of Materialism
Science Enters the Mysterious Inner World of Consciousness
Comments
MOST POPULAR IN Tisha BAv
Our privacy policy