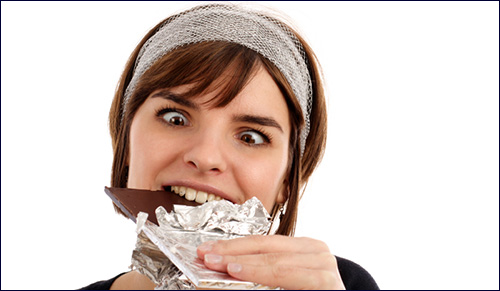 If chocolate wasn’t heaven-sent, why else would the first three letters of Godiva spell G-O-D?

If there’s one thing that really steams my potatoes, it’s so-called “health experts” who tell me I should not eat chocolate. Next to my Jumpy Java coffee, chocolate is one of my essential food groups, the others being frozen yogurt; hamburgers grilled medium rare and slathered with onions; spinach calzones; and fresh, lightly sauteed broccoli. After all, I believe in a balanced diet. And no, of course I would never have a calzone and a hamburger at the same meal! What, are you meshugga?

Chocolate is without doubt one of my essential food groups.

There have been at least 47,000 studies proving that dark chocolate is almost as good for you as stair-climbing. Dark chocolate boosts levels of antioxidants, which in turn gobbles up free radicals. And if there’s one thing I hope everyone can all agree on, it’s that there are too many radicals running free. I say, lock ‘em all up! Finally, eating the minimum daily recommended amounts of dark chocolate protects us from getting too skinny, which is a public health issue. Have you ever hugged a really skinny person? You could get splinters.

Despite all this evidence, some people whom I have consulted in the alternative healing community claim that chocolate – the most delectable and desirable food in the Almighty’s firmament – damages my “chi,” whatever that is. I admit that these tree-hugging, tofu-marinating healers have often helped me. I’ve felt better after drinking tea made from wild looking herbs that looked like the day’s haul from a groundskeeper at a national park, and I have felt better after being poked by acupuncture needles, so I’m not exactly unimaginative when it comes to the art of healing. But when these naturopaths and homeopaths opine heresies against chocolate, I must part company. Even if, God forbid, they are correct, I know the emotional benefits of savoring delicate chocolate morsels will more than compensate for any downgrading of my “chi.” Whatever that is. Meanwhile, I will wave around the copies of the European Heart Journal and the Journal of Cerebral Blood Flow and Metabolism, both of which have published data showing that chocolate can help prevent heart attacks and strokes. Maybe that will shut them up. Borrowing from the National Rifle Association’s most famous phrase, I’ll give you my chocolate when you can pry it from my cold, dead fingers.

I am campaigning for chocolate now because here it is February again, which is naturally National Chocolate Lovers’ Month. February 14 is most famous as Valentine’s Day, but it is also National Cream-Filled Chocolates Day. Valentine’s Day can be an emotionally riveting day for women depending on their relationship status. That is why I estimate that on February 14, women will consume approximately 700 billion calories in chocolates gifted to them by their “significant others.” Women who are not in romantic relationships will not be outdone or out-eaten, and will consume about 600 trillion calories in self-inflicted chocolate overdoses. Good thing that dark chocolate releases those feel-good endorphins. Women who OD’d on cream-filled chocolates the night before will need that emotional pick-me-up when they confront the muffin-top that sprouted overnight and that will require several weeks of serious stair-climbing to shave off.

Some nationally recognized doctors, including Mehmet Oz, claim that the health-boosting flavanoids in dark chocolate are so powerful that you don’t need a whole bar to get safely tanked up. Dr. Oz says a piece as small as a Hershey's Kiss can lower your blood pressure. But do you really want to take such chances when it comes to getting your antioxidants? Personally, I won’t risk it.

Jews can shep some nachas in chocolate history, too.

The Swiss and the Belgians have long been credited with a certain genius in making some of the most mouth-watering, rich and robust chocolate around. But Jews can also shep some nachas in chocolate history, too. A recent book called “On the Chocolate Trail” reveals that Jews were among the first to help bring chocolate to Europe. (They also brought the recipe for penicillin, but they were just waiting for the right time to announce it.) There is evidence that during the Inquisition, while we Jews were busy figuring out how to get the heck out of Spain safely, we were also importing the cacao bean to Europe. Jews always knew a good export when they tasted one. In the 16th century, Jews in Bayonne, France exported, re-exported and smuggled chocolate, and by the 17th century, a community of Jewish craftsmen there succeeded as chocolate makers until the goyish government, as usual, severely limited their participation in this trade.

Mexican crypto-Jews were also involved in importing and producing chocolate in 18th-century Mexico, even drinking warm chocolate on Friday night, because wine was scarce. And in Colonial America, two Sephardic families named Gomez and Lopez traded in and produced chocolate. That was even before Baker’s Chocolate Company, commonly known as America’s oldest chocolate maker, opened in 1780.

In modern times, Jews and chocolate have gone together like cream cheese shmeared on a bagel. The Vienese chocolatier Stephen Klein fled Vienna in 1938 and established Barton’s Bonbonniere, which today is better known as Bartons Candy. And if you haven’t tasted the divine chocolates made in Israel, well, it’s time to book a ticket to the Holy Land. Israel is chocolate heaven and boasts several boutique chocolate makers of hand-crafted creations. Everyone knows Elite chocolate, Israel’s leading mass-marketed brand of chocolate, but today Ornat, Israel’s first manufacturer of handmade pralines, runs a visitors’ center and factory store in Gush Tel Mond, and their chocolates are sold throughout Israel and online.

In fact, nobody is outdoing Israel when it comes to gourmet, delectable chocolates. In 2001, the Israel-based Strauss Group bought the hand-crafted Max Brenner “Chocolate by the Bald Man,” and today, Max Brenner chocolate boutiques and Chocolate Bar eateries dot Israel and Australia. But if you happen to be in Singapore, the Philippines, Las Vegas, Manhattan, Philadelphia or Boston, you can buy them there, too.

So you see? We have every reason to feel good about our chocoholism not only in February, but throughout the year. Our people have a proud history of savoring chocolate as well as making it and exporting it, making the world a better place. As for me, all this writing about chocolate is making me almost swoon with hunger, so I’ll sign off now to have dinner.

I’ll give you three guesses what I’ll be having for dessert.

The New Jewlarious Blog!
In the Shadow of David and Goliath
Where Do the Laws of Nature Come From?
Saadiah Gaon, Rashi and Maimonides: How Three Rabbis Revolutionized Judaism
Comments