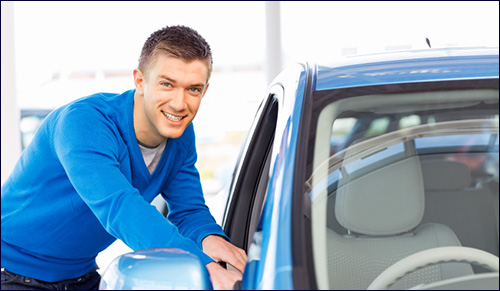 We’re in the market for a new car. This is not going to be fun.

My wife and I have been at the car dealer for about a week now.

Mostly, we’re trying to convince them that we’re not planning on buying a car today. That seems to be the main reason we’re here.

Our car is at a stage where the pieces just randomly fall off.

We’ve kind of gotten used to this place. It’s sort of like a normal office, with desks and copy machines, but then all of a sudden, right in the middle of the room, there are these big, shiny cars, like someone was running late to work and drove in through the wall. I find this very impressive, because I can’t even make room for my car in my garage, let alone in the middle of my place of work. Of course, I do most of my work in the corner of my living room.

There’s also a waiting room here, with donuts. I don’t know if they’re kosher – I assume they’re not, if for no other reason than that it’s always better for my health to assume that any donuts I see are not kosher. But I’m wondering what the mentality is behind the free donuts. Is anyone coming in and going, “Well, once we’re here for the donuts, we might as well buy a car”?

We’re going to buy a car either way eventually, because our car is at a stage where the pieces are constantly falling off, one at a time, and getting replaced. In fact, I believe it’s mostly machine at this point. So my wife decided that it would be a good idea for us to visit several dealers and test-drive some cars. I came along, even though I really don’t see the point of test driving. The way I see it, all cars drive well when they’re brand new. But I came along anyway, because to me, the main point of test driving, especially since we’re looking for a small, fuel-efficient car, is to sit in each of the seats and see if I fit. But really I can do this in the showroom, what with all the cars parked here.

I really don’t want to waste this salesperson’s time if we’re not buying anything today. That’s why I thought it was really weird that he was so relaxed about how long we took for our test drive. “Shouldn’t we be getting back?” I kept asking. “Nah,” he said.

We’re pushing off buying the car because once we decide we’re going to do it – and we know this because we’ve done this before – we’re going to have to take part in the official car-buying ceremony, which takes at least three hours and requires the salesperson to get up and wander off no less than 38 times. I think this is what happens when you have donuts in the back room. He has one job, and that is to sell cars, but they don’t let him keep any of the forms that he needs at his desk. So sad.

First you agree to buy the car, and he says, “Okay, let me ask my manager”. Apparently, his manager is very possessive of the cars, and doesn’t really want to sell them. So this salesperson has to bring the manager our case, and let him know that we’re really nice people who are going to give his car a good home.

Then he comes back and says, “My manager begrudgingly agreed to part with the car, but now we have to talk about price.” This is despite the fact that there’s a price on the sticker on the car, and that at some point during the test drive, he actually mentioned a price, which for some reason was not the same as the one on the sticker. So what’s the price? He doesn’t know. He has to leave again to ask his manager, who apparently is located in Wyoming. I guess the subject of price didn’t come up when he was telling his manger that we wanted to buy the car in the first place. He was just so excited that we were actually buying one.

Right. In any given year, he has six models of cars that he’s selling, and every day he tries to sell those same six cars, but he doesn’t know the price or how much he can go down. Uh huh. I used to work at an appliance retailer. We sold thousands of models, and we had a database that told us how much we got each unit for, how much we were supposed to sell it for, and how much we could let the customer negotiate down to if he really begged us and was our boss’s father. So I don’t know what’s going on back there. But then he comes back and gives us a third number that is definitely higher than the one he gave us before. So we start to negotiate.

Negotiating is a big part of buying a car. There are very few other businesses like that. You don’t walk into a grocery and go, “Okay, orange juice. How much do you want?”

“Three dollars? I’ll give you a dollar.”

“Sir, it’s three dollars. What are you doing?”

“Sold! Okay, the next thing in my shopping cart is butter.”

I actually can’t negotiate at all. First of all, I don’t know how to make a guy think that even though I’ve been sitting in his cubicle for three hours, I’m willing to walk out with nothing. Also, I’m too eager to please. I’d be like, “Fifty bucks off? Are you sure?” So I’m actually afraid that he’d convince me to buy two cars. So I’m a lousy person to have on your side in a negotiation. Thankfully, my wife is a lot better at it.

So you make an offer, or your wife makes an offer while you try to avoid eye contact with him, and the guy tells you that this is the lowest offer he has ever heard in his entire life, but he’s going to bring it to his manager anyway. And then he disappears, or possibly goes home for the night.

Then he comes back, his tie all askew, and he tells you that he begged his boss to let the entire company, as well as himself, make less money so they can be nice to a total stranger, and that they’re actually going to sell it to you for “slightly” more than that, even though they’re losing money on the deal. Although if you ask me, that doesn’t sound very financially responsible. At the appliance place, if someone wanted something for less than that minimum price, we would tell him to go swimming. We’re here to make a living – not to provide the world with appliances.

And then he walks off again. I don’t know where he’s going, but at this point I suspect that he’s going off on test drives with other customers.

“Shouldn’t we be getting back? I feel bad keeping you!”

So he comes back, and then he tells us about taxes, and something called a “$750 Destination Charge”, as well as several other charges that a supermarket could never get away with.

So I find that dealers are actually pretty honest in the sticker price. You negotiate them down a few thousand dollars, agree on a deal, and then they tack on their other fees, and -- What do you know? You’re back up to the sticker price!

So we’re hoping we can finish paying it off before it’s time to replace our other car.

Necessity is the (Jewish) Mother of Invention

Advice for the Kosher Traveler

The Ten Commandments of Jewish Worry: Part 1
The Promise Of The Land
Which Chat Are You On?: Parshas Behar/Lag Ba’Omer
Do You Like Slow-Cooked Food? Thank the Jews
Comments