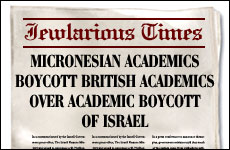 Polynesians to follow with boycott of yet to be determined country.

A tiny island nation in the middle of the Pacific Ocean has come to the defense of the State of Israel yet again over the recent boycott of its academics by the British University and College Union. The Union of Micronesian Academics, which consists of three members – two in "Iron Crafting," and one in "Irrigation Sciences," claim that the British Boycott is counter-productive.

"Israeli academics have been at the forefront, making discoveries in medicine, environmental sciences, and computer technologies," said union representative Samik Lenosid. "And what have the British given us? Besides for Monty Python and Mr. Bean, I am not sure. For that, we are boycotting the British."

The Micronesians are not alone in voicing criticism about the British boycott. Israel is even receiving support from the most unlikely of places. Sari Nusseibeh, president of the Palestinian al-Quds University located in East Jerusalem said, "Israeli Academics have been amongst the most progressive and peace minded people around the world. Boycotting these people would be counter to the principles of academic freedom and hurt the cause of peace in the Middle East."

British University and College Union head Paul Mackney responded, "Palestinian academics do not know what they want. This boycott is really quite good for them." To which Mr. Nusseibeh retorted, "No it's not." Mackney was reported to have responded, "Yes it is."

Micronesia's support for the Jewish state is not new. They consider themselves stalwart supporters, rarely voting against Israel in the United Nations. When asked why, Micronesian Vice President Alik L. Alik explained, "Israel is the only free and open democracy in a sea of totalitarian neighbors, yet they still manage to lead the world in so many crucial endeavors. That and we love the mud from the Dead Sea. It keeps our skin very smooth."

"That and we love the mud from the Dead Sea. It keeps our skin very smooth."

Micronesia doesn't just vote with Israel on the United Nations floor, they are also known to stand up for the Holy Land in the sub-committee groups where much of the anti-Israel rhetoric takes place. Reportedly, after hearing Libya and Uzbekistan speak derogatorily about Israel, Micronesia piped up and said, "Oh no you didn't! I know you didn't just say that about Israel, because if you did, you'd be getting a whole lot of Micronesian hurt coming your way and I know you don't want that."

When asked what their end goal was, the Micronesians in charge of the boycott boycott responded, "We would like the nations of the world to follow our lead and choose at least one nation to boycott. If we are lucky, in no time at all we will all be boycotting each other, and within a few years, academic research will only be done on Wikipedia."