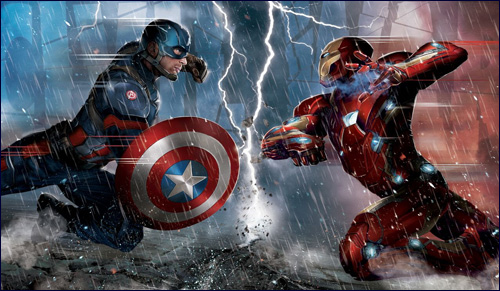 (Note: Spoilers below. I'm telling you this now, so don’t come after me with five of your close friends.)

They can do whatever they want, but I can't do it back? Is there no justice?

I've always had a question about this verse. What’s so bad about taking revenge? They can do whatever they want, but I can't do it back? Is there no justice? And if there is, how is revenge any different?

Well, I guess justice is mainly against bad guys. Revenge can be against good guys too. For example, every bad guy in a sequel movie is out to get revenge on a good guy for what he did in an earlier movie. He's never out to get justice.

“Why are you getting revenge on me? I didn’t even want to be there. I was complaining about it the entire movie.”

“Don’t mind me. I’m just a regular red guy sitting in the background.”

Because that's a big thing about revenge – when your mind is focused on vengeance, you're not always angry at the right person. As we see when it comes to Israel, sometimes the side that gets the blame is the one with the most people standing at the end. It’s easier to point fingers when you have someone to point fingers at. Otherwise you just look like some idiot with your finger out.

The same issue is the focus of the new Captain America Movie, Avengers 2.5.

A lot of people have actually questioned why it's not called Avengers: Civil War. After all, there are 12 superheroes in this movie, to the point where all the governments think this whole superhero business has gotten out of hand. They can't help but notice that every time there's a major spectacular movie fight sequence where things blow up, people die. We viewers like watching the Avengers, but in their world, if you see Avengers in action, you're standing too close. (Except for Stan Lee’s character, who keeps getting reincarnated.)

So after the events of Avengers: Age of Ultron, in which a robot decides to destroy Sokovia, which Google insists is not a real country, so we know whose side Google is on, the United Nations blames the people left standing – the Avengers. As one character points out, “Wherever the Avengers go, death and destruction follow.”

This isn’t entirely true. Death and destruction usually get there first. 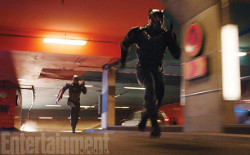 So the government proposes the Sokovia Accords – a treaty the size of a Harry Potter book which would put the U.N. in charge of the Avengers. This is a great idea, because next time the aliens invade, let’s have the U.N. debate whether the Avengers should go fight them.

Some heroes are for it. Iron Man, for example. Captain America, meanwhile, isn’t interested.

“What if they send us somewhere we don’t want to go?” he asks. “What if we want to go somewhere and they don’t let us?”

But since then, they’ve had several adventures. Iron Man spent 3 Iron Man movies and one Avengers movie putting out fires he himself caused. Meanwhile, Captain America spent his past two movies and the other Avengers movie seeing that sometimes the government's hands aren't the safest either. Sometimes they’re red-headed Nazis, sometimes they’re secretly Hydra, and sometimes they send you into town to fight aliens, and then when they think you can’t win, they try to nuke the entire Manhattan. And then they turn around blame you for a handful of accidents that happened while you were saving thousands of lives.

In time, both men have come around to the other’s way of thinking, and they passed each other on the way.

“In this job,” Cap says, “you try to save as many people as you can. Sometimes it doesn’t mean everybody. But if you give up, no one gets saved the next time.”

It’s kind of like the situation in Israel, where we battle in locations we didn't choose, and sometimes innocent people get hurt, but it’s far fewer people than would get hurt otherwise, and then the U.N. says, “Maybe we should make your decisions for you.” Really? Because like Captain America, we kind of feel like World War II was only yesterday.

“What if we want to go somewhere and they don’t let us?”

And Cap is proven right almost right away. At the ratifying of the accords, a bomb goes off, and it looks like the Winter Soldier did it. Yes, Bucky, the Winter Soldier, who was, once upon a time, Captain America’s, um, right-hand man, who was brainwashed and used as an assassin for the Germans and Russians. We thought he was reformed and peacefully spending his days going to museums, but he's back, and he seems to be against the accords.

Doesn't this mean Iron Man is right? We need to be placed in check.

But Captain America isn’t so sure. He wants to investigate, even though those in charge don’t want him to. Well, good thing he didn’t sign the accords. Because it turns out he’s right. Bucky was framed. But no one believes him. 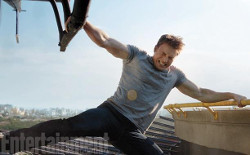 He feels like he's being pulled in different directions.

So it’s Cap’s job, along with everyone who wants to help him, to prove Bucky's innocence and prevent more Winter Soldiers from being activated

This all culminates in a huge airport brawl between #TeamCap (consisting of Mr. Rogers, Small Rudd, the Ultimate Arm-Wrestling Champion, the guy with the flying knapsack, Hunger Games Man, and Magic Wanda) and #TeamIronMan (consisting of Robot Batman, Robot Robin, Robot Alfred in his Autumn Soldier Sweater collection, Spider-Man 3, Black Widow (no relation), and Black Panther (Why does he have to be called “BLACK Panther”?) which demonstrates once and for all why they check us for weapons at airport security. And this 6-on-6 fight goes on for a while until they suddenly realize that everyone’s mother’s name is Martha. 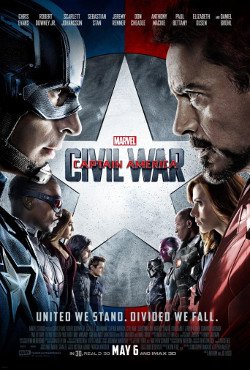 We eventually find out that the entire time, they were all being manipulated by the movie’s main villain, Whatsisname. Whatsisname’s family was actually killed in one of the Avengers' battles, and he vowed revenge on the heroes, of course, before he realized that no one could actually beat the heroes in a fight. But a promise is a promise, so he arranged events so that they’d fight each other.

And in a final masterstroke, the villain shows Iron Man a videotape of Bucky killing his mother, Martha. And Tony loses it. He starts going after Bucky, fully intent on killing him, even though a part of him knows that at the time, Bucky was not in his right mind. Bucky was being ordered – controlled, actually – by his government. And did that take away his accountability? Tony still wants to kill him.

But why did Tony do this? Why go back on the logic he was arguing for the entire movie and go after someone he knows wasn't responsible?

Revenge makes you lose perspective. Justice is justice, but if it's vengeance you're after, you get tunnel vision. And that's why the villain wins.

So why isn’t the movie called Avengers? Because the point of the movie is that vengeance gets you nowhere. The very man who named them Avengers becomes bent on avenging, and by the end, there are no Avengers. #TeamCap is branded criminals, and #TeamIronMan is shattered. Even Tony is no longer taking the government's calls. So who is the government going to oversee? Vision wearing sweaters?

“What? It’s my secret identity.”

It turns out that our worst enemies are not the ones that cause everyone to band together. They're the ones who divide us. We Jews have been around longer than any other nation on the planet. We're always the ones left standing. No one has wiped us out – not the Nazis, not the Norse Gods, and not the disappointing terrorist Mandarins posing for the camera. The only people who can take us down is each other. We just have to keep our heads so we don't.

Puncture: The Inside Story

The Hitchhiker's Guide to God
Live Abortion Panel
Morality and Abortion: Three Views
There Are No Limits
Comments