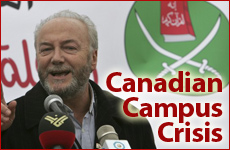 Rabbi Aaron Hoch's story of York University’s threat to sue him for speaking out against a university administration that allowed an infamous anti-Israel terrorist-supporter to speak on campus last week is by now well-circulated. [See National Post, CFRB 1010, and Pajamas Media.]

One thing is certain – Rabbi Aaron Hoch is not a man to keep his mouth shut, especially when what hangs in the balance is the “free speech” of a known anti-Semite on a Canadian university campus.

When Rabbi Hoch, of Aish Toronto’s Dan Family Village Shul heard that former British MP and Hezbollah and Hamas-supporter George Galloway, who was banned from Canada in 2009 for financing Hamas, was due to launch his Canadian speaking tour at York University, he wrote a letter to his 700-member email list, urging community members to take action – namely, to write to the office of the President and Vice-Chancellor at York, call the Dean's office to make an official complaint, and rally against the event.

“One of my main objectives with my community is for them to be active and leaders and stand up to things, whether it is an assimilation issue or a physical threat to the Jewish people,” said Rabbi Hoch in a phone interview on Friday afternoon.

His email, which spread virally, attracted the attention of York’s administration, which sent a letter to Rabbi Hoch, threatening him with a lawsuit for his defamatory characterization of the university in general and York University President Mamdouh Shoukri in particular, about whom Rabbi Hoch wrote “has again showed his amazing tolerance for anti-Semitism and lack of vigilance regarding the feeling of safety for Jewish students on campus.”

The letter was signed by the university’s General Counsel, Harriet Lewis. “This statement is untrue, is harmful to President Shoukri and his reputation, and to that of the university. We consider it actionable. We expect a retraction and apology forthwith,” she wrote.

Rather than respond to the rabbi’s concerns about inviting a Hamas-supporter to speak on campus, the letter took issue with his attempt to elicit a public protest against Galloway’s appearance. Wrote Lewis, Rabbi Hoch’s encouragement of non-students to participate in the protest “… is actionable and may constitute criminal activity.”

“My intention was to support the students to peacefully protest because often these students feel they have been abandoned by older adults,” said Rabbi Hoch, pointing out that it was just last year pro-Palestinian students at York swarmed a group of Jewish students who ended up barricaded in the school’s Hillel lounge.

"I felt it was an attempt to bully me into silence.”

“I found it ironic that York University is providing a forum for Mr. Galloway to advance his agenda, while threatening me with legal action for asking my congregants to peacefully protest this outrage. Something is very wrong with this picture!” he wrote back in a letter that he added to Lewis’s and re-sent to his email list. “By providing a forum for Mr. Galloway, I can only logically conclude that, under the leadership of Mr. Shoukri, York has chosen to show a tolerance for anti-Semitism.”

“The university reacted in a heavy-handed way. I felt it was an attempt to bully me into silence.”

Meanwhile, Galloway’s speech, the first on his 10-city speaking tour across Canada, went ahead on Tuesday, as planned. As did the peaceful protest that Rabbi Hoch inspired, attended by some 700 people, most of them students.

But the speech and the protest against it are not, as Rabbi Hoch says, the major issue at hand, but instead that Galloway’s appearance was condoned by the school’s administration and that he was invited to speak by the school’s student federation, headed by one Krisna Saravanamuttu, a key participant in the pro-Palestinian swarming of Jewish students in 2009.

“The main issue isn’t George Galloway per se, but that the main student union at York is being led by people who are sympathetic to Galloway’s views, and the university is doing nothing about it,” says Rabbi Hoch.

It’s not just a problem of York University, but an issue on campuses across North America and the West. “There is a very serious issue of Hamas sympathizers infiltrating campuses and university administrations that tolerate it,” says the rabbi. “It’s another way of delegitimizing Israel, creating fertile ground for anti-Semitism, and it’s also an insidious way of going to war against western values. It’s very dangerous, and not just to Jews.”

“The most dangerous time comes when anti-Semitic ideas are accepted by the intelligentsia."

This crisis on college campuses should not be underestimated. “The most dangerous time comes when anti-Semitic ideas are accepted by the intelligentsia. There is nothing more dangerous than the indoctrination of students on campus; the intellectualization of Hamas principles by professors,” he says, noting that this was precisely the precursor to the Holocaust. “There is no room for this in the lexicon of rigorous debate and academic expression and if there is, it tells us how normalized anti-Semitism has become.”

Unfortunately, Galloway’s appearance at York University is just one example of the normalization of anti-Semitism on Canadian campuses. The University of Toronto recently accepted and posted a Master’s thesis called “The Victimhood of the Powerful: White Jews, Zionism, and the Racism of Hegemonic Holocaust Education”, as reported in Pajamas Media.

Meantime, the National Post recently reported on Islamist groups in Toronto that are seeking to create a ‘parallel society’ in Canada.

Rabbi Hoch hasn’t completely lost hope. “There are some beautiful things happening in Canada. Prime Minister Harper has become a leading moral light in the world. At the same time, there are some things to be concerned about in Canada, especially on Canadian campuses. We can’t stay asleep. We have to wake up to what’s going on,” he says. “We should use this story as a wake-up call to do what we can to stand up against threats to the Jewish people and the West.”

Let York University know you support Rabbi Hoch. Write to the Mamdouh Shoukri, office of the President and Vice-Chancellor, York University Research Tower, Room 1050, 74 York Blvd, ON, M3J 1P3 or email mshoukri@yorku.ca, or call the Dean's office: 416 736 5200. Please make sure your letter is written in a respectful and responsible manner.

A Taste of Talmud: Delving into a Case Scenario
The Softball Player
How This 6 Generation Bread Baker Brought Back Israel’s Ancient Grains
Olivia Newton John’s Grandfather was a Nobel-Prize Winning Jewish Physicist
Comments