Dating Maze #226 - Getting Over the Past 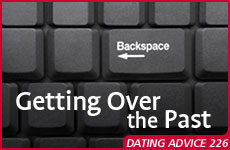 She's adjusted her moral compass, but history is haunting her.

For several years, I was involved in a serious relationship. Now recently, I have begun dating for marriage and found out that many guys do not want to date me because of my previous intimate experience. Growing up, I was mostly conservative, but unfortunately nobody educated me on the importance of saving myself for marriage.

Recently I met a guy I really liked, and he told me he wouldn't date someone with experience because he treasured the concept of saving yourself for your spouse, which needless to say broke my heart until this very day.

I regret tremendously not having this gift, and I have cried about it enough already. Unfortunately I was not raised with that value, but I grasped it and will teach it to my children.

My problem is that I do not know how to stop punishing myself and move forward with the joy of having come to this point of clarity. My self-esteem has gone down a lot. What would you suggest?

We receive many letters like yours, from young women (and even men) are embarrassed about aspects of their former lifestyles. Like you, most of these readers are upset with themselves and "punish" themselves for the choices they made -- choices that were completely acceptable among their contemporaries, and which were made at a time that they didn't have another perspective to guide them.

Please don't forget that you've already shown remorse for the choices you made in the past. The Jewish concept of teshuva (repentance) is to recognize your mistake, regret it, and resolve not to repeat it. When we do teshuva, we are able to move beyond our past and start anew. God looks at you as a new person. You should look at yourself the same way.

Here's an idea that might help you to be more forgiving of yourself:

Before you reached this point of maturity, you may have lacked clarity in a number of issues -- such as being honest in business transactions, properly honoring your parents, refraining from gossip, to name a few. Sexual modesty is another such area. But we should not punish ourselves for mistakes we made before we understood what the idea was all about, why it was so important, and what keeping it entailed.

Being able to accept yourself as you are today can help you be more sure of yourself when it comes to dating for marriage. The man who is right for you will be able to accept the fact that he is not "the first" -- and since it often happens that people from similar backgrounds are very compatible, it is possible that the person who becomes your husband will have his own history as well.

It's also a good idea to be discrete about disclosing information about your personal history. Sometimes, when a person feels guilty about the choices they made in the past, they feel a need to "come clean" and reveal their past to a dating partner early in the dating process. However, this intimate information is far too personal for most people to want to hear early in a courtship. It's also not something most people want to disclose to someone they barely know. We think it is more judicious to discuss this later, when two people have started to build a solid emotional connection and have begun to talk about marriage.

Even then, it's wise not to give a great amount of detail. One way to present this is to say, "You know that I adopted stricter standards of modesty when I was 20. However, before that time I had a serious boyfriend." You do not have to go into details, and in fact, we would advise against it. It is much easier for someone to accept the fact that his dating partner was physically intimate with her boyfriend than for him to hear the details of that relationship -- and those are none of his business. Similarly, for people who have had more than one relationship, it is unwise to reveal the number of partners or other details.

When you meet the man who is right for you, he will be able to accept you for who you are today, and will not be unduly concerned about the choices you made in the past. Together, you'll build a beautiful home and family that are based on the values you hold dear.