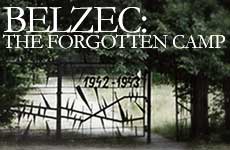 Not much is known about Belzec, where as many as one million Jews perished. No one survived to tell.

I wanted to go to Belzec (pronounced Biwzhets) because no one really does. One million Jews died there in the span of nine months – and hardly anyone knows about it. I felt it was a pilgrimage to a holy site: the second largest (after Treblinka) Jewish graveyard in history.

Mike Tregenza was my guide. He is a non-Jewish, English historian who lectures at Lublin university. According to Sir Martin Gilbert, he is the world expert on Belzec.

Belzec is a sleepy little hamlet in southeast Poland. A few thousand people live there. All seem to be related in some way. We stopped for a drink in a bar and the natives seemed unfriendly enough. All in all, it’s a pretty innocuous place. One would never guess that of the million Jews who arrived there in 1942, only two survived.

Mike told me that he interviewed the station-master who worked at Belzec during the war. On every cattle car that arrived, there was written a number; the number of "pieces" (as the Germans would say) contained therein. He kept a tally. When he reached seven figures, he could no longer continue.

Belzec was a part of "Operation Reinhardt." Its purpose, which was accomplished, was to destroy the Jewish communities of Eastern Poland – specifically the main centers of Warsaw, Lublin, Cracow and Lvov.

Operation Reinhardt began in March 1942 with the construction of Belzec and ended in August 1943 with the destruction of Treblinka. It utilised three camps: Treblinka in the north, Sobibor and Belzec in the south. It was masterminded by Sturmbahnfuhrer Christian Wirth and Belzec was his prototype " his baby.

Of all the camps in the Holocaust, Belzec was the most deadly. If a person went there, he was not coming back. There are Auschwitz survivors, Mathausen survivors, even Treblinka and Sobibor survivors. One will never meet a Belzec survivor. As such, relatively little is known of what went on inside the camp. Mike, though, with extensive research, can piece together a picture.

The turnover time for getting 3,000 human beings to ashes was about 2-3 hours. It took a little more time to sort the clothes and valuables, clean the trains and send them back loaded with goodies. Six thousand a day was probably its maximum capacity.

As Mike explained, once a person arrived in Belzec, he would have wished he was in Dante’s inferno. Guns and dogs, undress, run naked up a steep hill flanked by Ukranians with whips, sticks and swords, pushed into a small chamber by the weight of people behind, doors closed, gas…

That was if he was lucky.

In many instances, the engines, which produced the gas, broke down. There were times when people waited hours upon hours cramped like sardines into a gas chamber until the engines could be fixed and they could be gassed. Even Rudolf Hoess (the erstwhile criminal who became kommondant of Auschwitz) was horrified by the methods used. It was, in his words, "inhumane."

Mike told me that 12 SS men and some Ukranian auxiliaries staffed Belzec. It was a shocking and horrifying thought: 12 SS men could murder a million Jews.

The Germans destroyed Belzec when they left and planted a forest instead. They wanted to cover up what had happened and, unfortunately, they did an excellent job. To the undiscerning eye, absolutely nothing remains. It is a broken railroad track that ends in a road up to a forest. There is a small, dilapidated memorial containing some bones and ashes (which is regularly vandalised by Poles searching for "Jewish gold"). It is overgrown and unkempt.

On the surface, there is nothing to indicate what happened here less than 60 years ago.

But then Mike bent down and picked up some small white and black fragments from the ground. I thought them to be small stones. I looked more closely and was again horrified: they were human bones. Once we reached the mass burial pits, the fragments were everywhere. When I started to search, I found many complete bones, some from adults and some, quite clearly, from children. I found a whole set of teeth " with holes where the fillings had been.

Auschwitz/Birkenau is a major tourist attraction. Treblikna has a heart-wrenching memorial. But at Belzec, there are only bones. It’s a quiet spot, in a pretty forest. And if you spent a few years there, you might just be able to pick them all up. But what touched me most deeply about Belzec, and continues to do so, was its loneliness. It is a forgotten camp. So few people visit. The first tragedy is that so many died here. But the more immediate tragedy is that nobody really seems to care.

Death at Sea: The Tragedy of the Struma
The Japanese Everything Bagel Spice Recipe
How To Stock A Jewish Pantry Wherever You Live
Blessing on Chewing Gum
Comments
MOST POPULAR IN Israel
Our privacy policy