As The Tsouris Turns 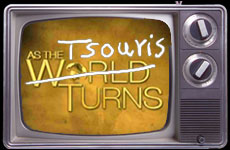 I used to write for the soap opera As the World Turns. Here's the Jewish version.

During the nineties, I had the honor of writing the venerable soap opera, As the World Turns, which recently, after over 50 years, like thousands of its former “Oakdale” occupants, fell into that great “bubbling” mine shaft, never to return, even as another soap.

Like my own “evil twin,” I had a love/hate relationship with the sudser. I loved my boss, most of my colleagues, and the poor inhabitants of Oakdale.

What I wasn’t crazy about was living there. In rain, shine, sickness or health, we had to keep that “World” turning, 260 days a year. If a wayward bus drove through my office (Ptui!) CBS would’ve sent flowers with a card: “So sorry for your freak accident. By the way, did you have anything in the machine before the tires ran over you?”

More than the relentless deadlines, the daily goings-on could drive a relatively sane writer to vault from a cliff, side saddle with half the town. Like some rabid Twilight Zoner, once you pass the sign post that reads: “Oakdale,” you’ve traveled to another dimension, not only of sight and sound but of mega-mishegoss. A dimension where truly twisted villains go unpunished until they save a fourth world “soap” nation, 10-year-olds have 10-year growth spurts, star-crossed lovers get knocked into amnesia, relatives return from the dead like Lazarus (with a facelift), and “illnesses” abound that would confound even the Atlanta Center for Disease Control.

To be fair, we wrote many “message” storylines. “Oakdalians” dealt with cancer, bigotry, depression, heart disease, incapacity, and living wills, to name a few.

But, on occasion, even in the relatively stalwart Oakdale, the “Stomach Turned.”

During my stint, I personally: Unshrunk a shrunken head to bring back a whole human; removed a man’s temporal lobes leaving him half brainless (not to mention forgetful); restored his memory with a lightning bolt, and created a viral disease by way of a spider.

Who could do such things? God, of course. Or the good people at CBS and Procter & Gamble.

But interesting, there was one thing I couldn’t do. Move a Jew to Oakdale. (At least back then.)

The lack of landsleit was curious. True, the “town,” somewhere in Illinois, was tiny. But it had a world-class hospital, a world-class design center, and did world-class business. Without one Jew? Sometimes, we tossed in a name at least, “Paging Doctor Co-hen. Paging Doctor Co-hen.” Much like the symptoms he was treating, “Dr. Cohen” was a phantom who no doubt lived in West Oakdale, next door to his equally elusive neighbor “Judge Levy.”

Also curious was the general lack of Jewish soap writers, despite a fair amount of Jewish producers, and the fact that the radio and T.V. “soap opera,” launched in the 1930s, was largely the invention of Grand-bubbe, Irna Phillips, a Jewish, Chicago schoolteacher/actor -turned master storyteller.

So why so few Jews, on and off-camera? No, this wasn’t some vile anti-Semitic plot twist. Simply, I believe Grand-bubbe knew she was writing for “VanillaVille.” In Irna’s “lands” people spoke in a “foreign” dialect. Listen:

A diva learns that her 10 -year-old tatelleh was switched at birth and his real father has snatched him, but will return him for a price when the boy turns 20, which, in Soapdom, will be during Fall Sweeps. Mama’s response? “Golly,” “Gee,” “Golly Gee!” “Heavens!” “Heavens to Betsy!!” “My Stars!” “Oh, My Stars!” and the occasional “Darn!!”

Sound like any Jewish mother you know? Perhaps instead try, “Are you meshugge?!,” “May your teeth get angry and chew off your head!,” or even “I’m calling cousin Melvin, the lawyer!” That’s better.

We Jews are made for soap operas! Are we not plagued with mishegoss?

Which raises yet another irony: we Jews are made for soap operas. Are we not plagued with mishegoss? Do our kishkes not turn, no churn, with drama? And can we not create this drama, often from bukpis? Personally, I can go the grocery store, and come back with a mini-series. (“A baby was left unattended, so, after checking the bathrooms, I wheeled the carriage to the manager, then a soda can exploded in aisle 3 just as a suspicious-looking foreign woman asked me where the hummus was… ”)

So yes! We Jews are the soul of soap stuff. And our mishegoss is better than their mishegoss. But more, VanillaVille has no stereotypes to heighten! (How much can you milk white bread and mayonnaise?) On the other hand, our stereotypes are alive, if not so well, and abound: the perfect fodder for continuing drama.

If I had my way, I’d write a Jewish soap – As the Tsouris Turns. And if I did, this is how some of our storylines would look as compared to “theirs.”

“THEIR” SOAPY STORYLINES VS. OURS

In VanillaVille, one klop and they forget their names, their spouses, even what they look like.

Our macher diva takes an accounting, then pays a visit to those shmendriks, not nice bulvans, and shmegegges from her past and finally gives them their due. She never forgets!

VanillaVille has its’ residents falling or jumping from cliffs and planes, or flinging, flying, and floundering in caves, mine shafts, underground cities, and jungles.

Using a 5-year arc, we follow three Jewish families, as each stays put in different rooms of the house. One “A” story might involve the adventures of a teen who creates an entire village in his room, and never has to leave.

Stereotypical Storyline Them: “Back From the Dead.”

People who died in fiery crashes, explosions, and other tumult, return looking not only gorgeous, but different from the plastic surgeries they had in the mountains of Montega.

Stereotypical Storyline Us: “Back From a Kibbutz’”

A wastrel son “went on vacation” to Israel and comes back, looking tan, muscular, a regular heart throb, who’s determined to start a “nouvelle” Kibbutz on Main Street.

In VanillaVille, “SORAS” (It’s true, my friends), or “Soap Opera Rapid Aging Syndrome,” is rampant. It’s a land without “tweenies” as children age up from 10 to 18, sometimes in a matter of months.

Our children are plagued by “SORIS (with an “I”)” or “Soap Opera Remaining in Infancy Syndrome” where our children never grow up. Sheldon can be 37, and head of Mount Tsouris hospital, yet to his mom, he’s still “Shmooie.” “Mom,” however, our macher diva, has been blessed with “SHAYNA” or “Stay Healthy, Always Young, Never Aggravated.”

So there you have it. The makings of a Yiddishe soap. And the best part? Despite “All Our Tsouris,” in 3300 years, we haven’t been, nor will be ever be cancelled!

Tabloid Media Celebrates Life of Robert McNamara
The Blue Beyond
Great Place to Live
Is Eating Supposed To Be Spiritual?
Comments
MOST POPULAR IN Jewlarious
Our privacy policy