Am I for Real? 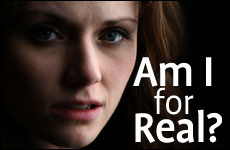 There was a little voice of doubt that worried me. What if I was a fake?

I converted to Judaism when I was 16 years old. I loved being Jewish and I wanted to be as Jewish as I could be, so six months later I went to Israel to learn Torah for a year. My family thought I was in a phase that would pass. They were being tolerant. My friends thought I was finding myself and that I’d soon find my way home. But in Jerusalem, in learning Torah, in Judaism, I knew: I was home.

Before I even converted, the first mitzvah I kept was saying the Shema. I learned about it in the book To Be a Jew, and I memorized the transliteration and said it in Hebrew and in English every night before I went to sleep, just like it said to do in the first paragraph that follows. I even wrote it on the doorpost of my bedroom as it said to do, "And you shall write them on the doorposts of your house…" (Deuteronomy 6:9). I had not yet seen a mezuzah at the time, so I took the words literally and used a black magic marker to write directly on the door frame, “Hear O Israel, the Lord our God, the Lord is One.”

Since the day I stepped out of the mikvah and became a Jew, I had no regrets and I never looked back. I loved God, I loved the Jewish People, I loved the land of Israel, and I was thrilled to be a part of it all.

And yet there was a little voice of doubt that worried me. What if I was a fake? What if my family was right? I was young after all. What if it was a passing phase?

I heard disheartening stories like the Catholic who became a Jew but recited the rosary on his death bed.

I thought I was solid, my commitment was firm, but I had heard disheartening conversion stories of others, in both directions: the Jew who converted to Catholicism and even became a priest, but who wanted kaddish recited at his funeral, and the Catholic who became a Jew but recited the rosary on his death bed.

What if, in the moment of truth, I wasn’t for real?

I was happy to live as a Jew, and I wanted to die like a Jew… but not for a really long time. How would I know that my conversion really worked?

I continued to learn and grow as a Jew. I spent a second year in yeshiva, I served in the IDF, I married a wonderful man, I covered my hair, we kept shabbos and a kosher home, we went to Russia to visit refusniks, I became a mother, and I continued to learn. My life was so good, it was almost surreal, and still I wondered, could this really be me? Am I for real?

One night my husband and I went on a date. We left our sleepy town of Long Beach, Long Island in search of some place that was still awake. We chatted amiably as we joined dozens of cars on Sunrise Highway when suddenly our car began to spin uncontrollably across the four lanes. We didn’t know what was happening but we knew we were going to have an accident. As I braced for another car to plow into us I cried out, “Shema Yisroel, Adonai Eloheinu, Adonai Echad!”

Then our car came back under control, and despite so many cars on the road, we were not hit. We drove back across the highway, onto the right side, and we continued on our way, unscathed, but not unaffected.

As we sat there, quietly driving safely together, I realized the gift God had just given me. I was only in my early twenties, I didn’t have to wait for my deathbed to find out. Just a spin across the highway, and now I knew, I knew: I was for real.

Realness should be a regular question.

Looking back on this story, almost a quarter of a century later, I now know that realness should be a regular question. Although I never again wondered if I was really Jewish, I often reflect on how real I am being in my personal journey.

And yet, I don’t learn as often as I should, I don’t speak as nicely as I should, I’m sometimes distracted as a mother and my kids are only partially perfect. My books remain unpublished, my revolutions are going too slowly to make a huge impact and, alas, the world is not yet perfect.

Patience says, “It takes years, decades, a lifetime, to accomplish all this.”

It is living in the tension of those opposites that real growth can occur. In the words of Rabbi Avi Fertig, it is “Pulling the rope at both ends,” and pulling hard.

Hopefully, Perseverance is the third voice. It says, “I’m your tool. Stick with me and you’ll get there.”

During most of the year, I struggle for balance and I strive for perseverance. But during the month of Elul, I believe that passion should get the lead role.

Elul is the time for dreams, for brainstorms, for thinking big, for discernment, for goal setting, for creating potential. The last six days of the month is the time the Almighty created the world. He created a new reality. And, during those days each year, from 25 Elul to Rosh Hashana, the energy of creating a new reality is available to each one of us.

Now is the time for passion. Patience will just have to wait.

Just Breathe: Endless Potential
The Power Of Prayer
Va’etchanan 5782: A for Effort
Can You Show Me This "God?"
Comments
MOST POPULAR IN Spirituality
Our privacy policy
Aish.com Is Looking for Great Writers