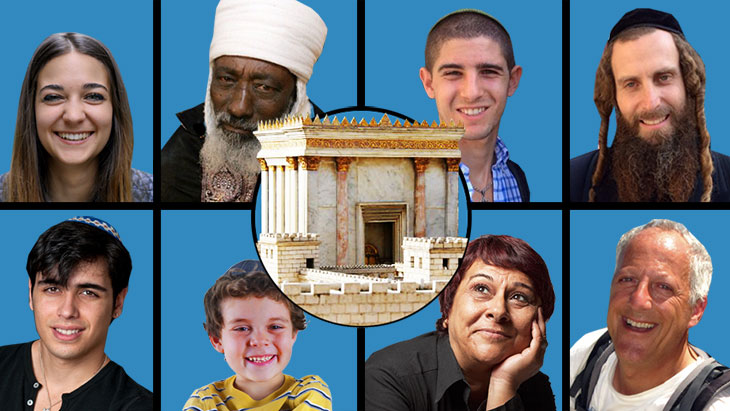 The original six Brady children reunited for A Very Brady Renovation. It's time for Jews to unite for an even more elaborate renovation project.

I grew up watching reruns after school and my favorite, by far, was The Brady Bunch. I learned the nuances of each episode, the ins and outs of the multiple plotlines.

My Brady interest has faded over the years but it was recently piqued again by a fascinating new series A Very Brady Renovation.

Last year, about 49 years after the Brady Bunch first aired, the famous Brady Bunch house which was used for the exterior “establishing shots” of the show went on the market. HGTV won the bidding war, purchasing the house for over twice its asking price.

The interior of the actual Brady Bunch house was never used for the show since the series was shot on a set at the Paramount Pictures studios.

A Very Brady Renovation endeavors to recreate the Brady Bunch sets ​inside the Brady Bunch house, down to its finest detail. For example: the wallpaper in the Brady boys’ room is no longer available. So HGTV went to a graphic designer who recreated and reprinted the wallpaper. And the wallpaper, which features ships, was hung in the exact same manner so the same part of the boat print would be above the same part of the bed. The addition to the house, necessary to recreate the famous stairs off the living room, needed to be built into a sunken foundation so that the view from the street would remain the same. (Otherwise, the roofline would now include the new second floor.)

And so on, for every single room and every single item of ​décor​. The HGTV stars carried around iPads with photos of every angle of every set as they tried to recreate it. The large-scale renovation took almost a year to complete.

The series features six surviving members of the Brady cast – all the Brady children, now in their 50s and 60s. The premise was that it would be impossible to recreate the set without those who had actually been there (and I’m sure for their ratings appeal). Were the fake grapes on the living room table made out of glass or plastic? Maureen McCormick, who played Marcia Brady, knew: they were glass.

The now-grown Brady kids scoured thrift shops and TV prop shops in Los Angeles to find the items they needed. For the items that were missing, they turned to their fans and listed the items on a special website. Did anyone have a stuffed giraffe like the one in the Brady girls’ room? Vicki from Sheboygan, Wisconsin did. She mailed hers in to the HGTV team and it now sits in the renovated house.

Is there a deeper message here? What are we to learn from an extended search for Cindy’s Kitty Carryall doll?

And then it hit me. Jews also have a mission to recreate something within one supporting wall that still stands. We too must pay immense attention to every detail. I speak, of course, of the Beit HaMikdash, the Holy Temple in Jerusalem that was destroyed in 586 BCE, rebuilt in 353 BCE and then destroyed again in 70 CE.

We don’t have anyone alive today who saw the Temple but we do have something else: the teacher-to-pupil direct transmission of the traditions. While the HGTV crew walked around with iPads, our Rabbis walk around with their volumes of the Talmud which describe the Beit HaMikdash in tremendous detail. They walk around with the knowledge imparted to them by their teachers, who learned it from their teachers, and so on, back to those who were actually in the Holy Temple.

The “crowd-sourcing” of missing items, as HGTV calls it, has a parallel as well. No, I’m not talking about ​asking the Vatican for our items back​, although vessels from the first Temple ​were returned for use in the second Temple​. I’m alluding to the fact that ​Jews contributed financially to the project. ​Even if they didn’t contribute financially, they’d make a pilgrimage 3 times a year to experience the Temple for themselves. The Temple was truly a home for all Jews.

While reconstructing the Brady set gets HGTV high ratings and creates feelings of nostalgia in longtime Brady fans, the rebuilding of our Temple is obviously so much more. We pray for it three times a day. We long to once again have a place we can always feel the Shechina, God’s presence. We long for the open miracles which took place there. We long for the very rituals we’re describing, the sometimes complex, but always beautiful, service that took place there. We long for it because we know that God, the Ultimate Designer, wanted his Temple to function that way.

And so, this Yom Kippur, as we read in detail about the service that took place in the Temple on Yom Kippur, perhaps we should try to pay a bit more attention than usual – and add an extra prayer that we’ll be able to use it speedily in our days.

Lani Harrison lives with her husband and three small children in Los Angeles. She studied journalism in college but shifted gears, so to speak, when her oldest was born, and now works as a child passenger safety technician, educating parents about child safety seats and writing articles for car seat websites.

Wistrich on "The Left, the Jews and Israel"

Defiance
It Takes A Lot Of Faith To Be An Atheist
How Instagram Brought Back This Nostalgic Soup
What Makes Eli Run?
Comments
MOST POPULAR IN Current Issues
Our privacy policy