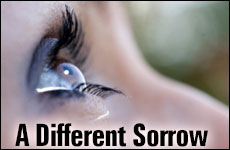 Mourning for the wholesome world I once grew up in.

Every year when the Nine Days come and the Jewish people are plunged into a period of deep and intense mourning over the destruction of the Holy Temple, I bump up against this hard truth.

I am careful to observe all the practices of mourning that our Sages outlined. I refrain from cutting my hair, from listening to music, from eating meat or drinking wine. I work to understand that the loss of the Temple was epic, that it signaled the end of a period of prosperity and peace and plunged us into a dark time of exile, of revilement and humiliation from which we have still not emerged. I know that our grief and our yearning must never abate until the Temple and the Jewish people are restored to our former glory and yet… you just can’t miss what you’ve never known.

I try to feel it. I want to feel it! I immerse myself in the words of our Sages of old and the Rabbis of today. I read the Lamentations and try to imagine the terrible desolation, the siege, the hunger, the abject fear that faced our nation, but it’s like straining to catch the scent of an exotic flower you’ve read about that blooms once in a lifetime in the desert. Or trying to imagine your unborn baby’s face. I want to, I ache for it, but it just isn’t there.

It’s the ruin of my own world that I grieve.

And yet I too lament. The sadness of this time does not leave me unaffected. I am heavy with sorrow for a destruction of a different kind. It’s the ruin of my own world that I grieve.

I mourn for the wholesome world I grew up in when I see a generation that is deaf to each other but alert to the buzzing of their cellphones, a generation where people amass friends through Facebook but would not greet them in person or extend them a helping hand. I see our decline in the diminishment in modesty, physical and spiritual, that manifests from every billboard where faceless torsos contort, selling soullessness, and unclothed, uninhibited marchers parade by flaunting their nakedness to the world. I see it in a world where we parent out of fear because our children believe that with their gadgets they have surpassed us, discounting our wisdom and advice in favor of their memory cards and gigs of ram.

I feel the sorrow of our world in the stories I hear every day of babies stricken with terrible diseases, with lifelong difficulties and their parents who struggle desperately to save them.

I see it in the rash of charity collectors who come to my door daily, each with a story more compelling than the last and I feel it when I give them money but I don’t invite them in because “you can’t be too careful these days.”

I hear it in the speeches I have given my children about pedophiles and molesters, some of whom look just like us and I feel it in the shame of “Orthodox” criminals making headlines in the news.

My world is collapsing before my eyes! A world into which I was born and raised and grew, destroying itself with its own corruption and decay. In panic, I hear myself call out, ”Eichah! Alas!”

But I have learned enough to know that God does not abandon us even in exile. That He has promised that as we mourn, one day we will be comforted. And I find myself speaking the old words of entreaty, “From your place on high look down on us! See our desolation and intervene because we are waiting for You!”

In the face of my deep sadness there is nothing to say but the words that have already been said, by countless Jewish voices throughout thousands of years.

When the Nine Days come, I feel the ache of all the miserable curses of exile, the prophets’ words fulfilled, and I pray fervently for our redemption.

So even though I can’t miss what I’ve never known, I can still lament.