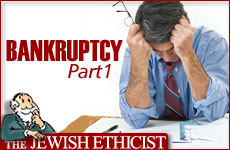 Is it ever proper to advise someone to declare bankruptcy?

Q. My job involves advising people on their financial affairs. Is it ever proper to advise someone to declare bankruptcy and avoid paying his debts?

A. Everyone has to pay their debts but not everyone can, so the question arises what to do when a borrower is insolvent. One of the solutions is bankruptcy, which involves formal legal protection of the borrower against certain collection actions.

The modern concept of bankruptcy began as a procedure for the benefit of creditors. When a person or business becomes insolvent, creditors may race to be the first to collect. This is both wasteful and unfair. It is wasteful because the creditors are investing effort and money to be first but the total amount collected is not augmented by this effort and indeed is usually diminished because assets may be sold in a hurry at discount prices. It can be unfair because the one who actually gets the money may not be the most worthy – the first, the largest, etc. So a creditor can request a bankruptcy proceeding which will halt all debt payments and arrange for an orderly, efficient and fair liquidation. This process can also benefit the debtor, as he is part of an orderly process instead of a frantic raid. In addition, it may be in the benefit of all parties to keep the debtor free and working and bankruptcy facilitates this option.

Later on legislators began to turn their attention to the welfare of the debtor as well as the creditor. In the US we find that there were occasional debt amnesties, but eventually this was institutionalized in legislation allowing debtors a "fresh start" under some circumstances.

This set the pattern that persists until today, with two different kinds of debt relief: graduated payment plans to protect the borrower from collection as he pays his debts over an extended period, or a discharge that completely erases debts and enables the debtor to start anew.

Both of these procedures have precedents in Judaism, but in Jewish tradition the orientation considered foremost the well-being of the debtor. In this column we will mention a number of Torah commandments that protect the debtor from excessively harsh collection actions. Next week we will continue and see how these Torah principles were applied, and what kind of balance was struck by later Jewish sages between the interests of debtors and creditors.

The following verse states that if the debtor is unable to pay, it is forbidden to dun him merely to harass him. (All translations are from "The Living Torah".)

When you lend money to My people, to the poor man among you, do not press him for repayment. [Also] do not take interest from him. (Exodus 22:24)

The subsequent verses relate to a pledge or pawn. This was the dominant form of lending in the time of the Torah, but the Torah ensures that this is used only as it is needed as a security for the loan, and not as a way of creating hardship for the borrower as a way of pressuring him:

If you take your neighbor's garment as security [for a loan], you must return it to him before sunset. This alone is his covering, the garment for his skin. With what shall he sleep? Therefore, if he cries out to Me, I will listen, for I am compassionate. (Exodus 22:25-26)

Likewise, a pledge should not be counterproductive and prevent the borrower from making a livelihood. As we see, this Torah principle serves as the main basis for making a humane payment arrangement:

Do not take an upper or lower millstone as security for a loan, since that is like taking a life as security. (Deuteronomy 24:6)

Another principle is that the right to repayment or a loan security is legitimate, but may not serve as a lever to violate the borrower's dignity or privacy:

When you make any kind of loan to your neighbor, do not go into his house to take something as security. You must stand outside, and the man who has the debt to you shall bring the security outside to you. (Deuteronomy 24:10-11)

Alongside these individual admonishments, there is a nation-wide command to have a general release at the end of every seven years, when all debts are released and all obtain a fresh start:

These are the basic principles. Next week we will see their application and development, and see when bankruptcy can be considered a legitimate and ethical step.

The Jewish Ethicist: Worker Ownership I

The Jewish Ethicist: Seeking Lost Owner
G-d Time
Shavuot is The Holiday of Cheesecake and Blintzes
What Does Kosher Mean Literally?
Comments
MOST POPULAR IN Current Issues
Our privacy policy