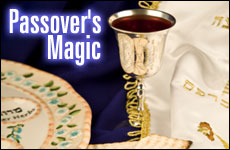 Passover is coming and I have entirely missed the point.

When springtime comes I begin scowling at the insides of closets and the undersides of beds. “Passover is coming,” I mutter to myself and sigh.

“Passover is coming,” I repeat, “and I have more work than one human being could possibly do.” Then I sigh again, theatrically.

I don’t even notice my son, listening, until I hear him say, “Well, at least we’re not in Egypt anymore. Right, Mommy?”

I stare at him for a moment, ashamed of what he has heard. Passover is coming and I have entirely missed the point.

Back when I was his age, before I knew about cleaning and cooking and shopping, Passover was a wondrous time. The house was scrubbed spotless and the once-a-year dishes came out. The silver was polished so brightly that I could see my reflection upside down in the spoons. In the kitchen waited lady fingers and nut cakes and chocolates and meringues. At the table, my handmade Haggada could finally come out of its plastic bag and my mother’s finger pointed to the place. I shivered with excitement.

Somewhere along the way, I lost the magic.

The Seder was magical. Staying up late, eating with the grown ups, all eyes on my face as I sang the Ma Nishtana. For once, no one was annoyed by my constant questions. No one shushed me, or whispered, “Later!” For once, every question was important, every answer well thought out. I drank from a silver goblet, like my father, like my grandfather. I dipped my pinky into grape juice ten times and no one stopped me! Even when I spilled, leaning against my pillowcase, no one really minded.

My father was regal in his long white robe, his kittel. “Ha Lachma Anya, This is the Poor Bread,” he intoned and I felt a chill run down my spine. How many fathers for how many years had said these same words? How many children had sat just like me, wide-eyed with wonder and listened? And the story! There were heroes and villains, kings and slaves. My mind whirled with the magic of it all.

The maror on my matzah was sharp and bitter. I knew it would be because I had stood beside my father as he grated it by hand into a bowl. He wore goggles and still the tears streamed down his face. But at the Seder he always gave me twice as much of the nutty sweet charoses as maror, and winked as he passed it down.

Then we ate hot chicken soup and boiled flanken meat and kugels. And I could hardly swallow waiting for the Afikomen. What joy! What awesome power in the hands of an eight year old girl! To ask for anything you wanted, anything! Sometimes, I got so excited I couldn’t think of a single thing to ask for. And besides, what more could I want than this moment and this night?

But the best part was inviting Elijah the Prophet. I’d take a deep breath and pull open the door. Outside, the night was black as pitch and silent. But I thought I felt a breeze as his spirit entered. “Baruch Haba! Welcome!” we called out and watched the wine shimmer in his cup.

By then, my eyes were closing and I leaned heavily on my mother’s shoulder. “L’Shana Haba Biyerushalayim, Next Year in Jerusalem!” we sang and Shoin! Shoin! Shoin! Now! Now! Now! We banged our fists on the table, with such authority that I knew the Messiah would listen and he would come. Tonight!

How lucky I felt to be a Jew on Seder nights! To know that the story had happened for me. The frogs, and the lice and the darkness and the fury of God raining down on their heads just so I could sit here tonight, in my maroon velvet robe, and ask the questions and hear the answers. Just so I could hear how the bad guys got punished and the good guys got saved and we lived to tell the story and wait for the Messiah to redeem us again.

But morning came and he did not. And years have passed and still he has not come. And I got busy with the drudgery of moving the fridge and lining the drawers and scrubbing the stove. When did I stop waiting? When did I stop wanting? Somewhere along the way, I forgot the point. I lost the magic.

I forgot that we too can rise again, if only we believe that God is on our side.

I forgot how it felt to know that we were chosen. That a tiny, struggling nation was plucked by God’s own hand to be His precious children. That we followed his messengers and left the only home we had known for the promise of something better. That the lowliest Jew in Egypt, impoverished, enslaved, beaten down, believed somehow that he could be great, that with God at his side he could rise again.

In the drudgery of our own lives, in the chaos and confusion of our culture, I forgot that we too can rise again, if only we believe that God is on our side. That we are also chosen, that we are still special. I forgot.

Now I look down at my son’s soft eyes and it all comes back. It’s not about cleaning the stove; it’s about telling the story. It’s about the miracle and the magic. So this year I resolve, I will stop sighing. I will come to the table wide eyed again and listen to the tale that is made new every year by our children and their questions and our faith in the answers.

This year, I’m bringing back the magic.

When I Left Egypt

Passover and the Eleventh Plague
Blessing on Chewing Gum
Was Rahab a Prostitute?
Extras In Our Own Epic
Comments
MOST POPULAR IN Passover
Our privacy policy