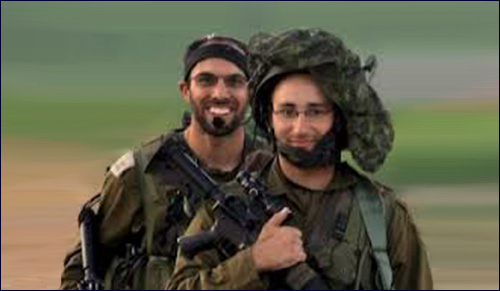 It’s time to wake up.

As a young Israeli who had just completed five years of service in the IDF, I looked forward to my new job educating people in the Pacific Northwest about Israel. I was shocked, however, by the anti-Israel bigotry and hostility I encountered, especially in the greater Seattle area, Oregon, and Berkeley. I had been very liberal, a member of the leftist Zionist party, Meretz, but the anti-Semitism and hatred for Israel that I have seen in the U.S. has changed my outlook personally and politically.

The anti-Semitism and hatred for Israel that I have seen in the U.S. has changed my outlook.

As part of my work as an educator at StandWithUs, between January and May this year, I traveled to college campuses, high schools, and churches sharing the history of modern Israel. I also shared about my experience growing up in the Jewish state, and about my family. I also always spoke about my military service as an officer in an IDF COGAT unit that attends to the needs of Palestinian civilians who are not involved in the conflict and promotes Palestinian civil society. Each time I would speak and take questions for an hour or more. I have shared my personal story with over 16,000 people at many, many college campuses and high schools, including UC Berkeley, Stanford, the University of Washington, Seattle University and many others. Many of those to whom I spoke were supportive, friendly, and open to hearing about my Israel. But, sadly, far too many were not.

When I served as a soldier in the West Bank, I got used to having ugly things said to me, but nothing prepared me for the misinformation, demonization of Israel, and the gut-wrenching, anti-Israel, anti-Semitic hostility expressed by many students, professors, church members, and even some high school students right here in the Pacific Northwest.

I was further shocked by how unaware the organized Jewish community is and how little they are actually doing to counter this rising anti-Semitism, which motivated me to write this article.

This new form of bigotry against Israel has been called the “new anti-Semitism,” with “Israel” replacing “Jew” in traditional anti-Semitic imagery and canards, singling out and discriminating against the Jewish state, and denying the Jewish people alone the right to self-determination. The new anti-Semitism is packaged in the Boycott, Divestment and Sanctions campaign (BDS), which claims to champion Palestinian rights though its real goal is to erode American support for Israel, discredit Jews who support Israel, and pave the way for eliminating the Jewish state. One of BDS’ central demands is the “complete right of return” for all the descendants of the original Palestinian refugees, subtle language that means the end of Israel as the Jewish homeland because it would turn Israel into a Palestinian-Arab majority state.

It is surprising that an extremist group like BDS is ever taken seriously, but BDS advocates have found receptive audiences in some circles. Their campaigns are well organized and in many cases, well financed. They have lobbied universities, corporations, food co-ops, churches, performing artists, labor unions, and other organizations to boycott Israel and companies that do business with Israel. But even if these groups don’t agree to treat Israel as a pariah state, the BDS activists manage to spread their anti-Israel misinformation, lies and prejudice simply by forcing a debate based on their false claims about Israel.

To give you a taste of the viciousness of the BDS attacks, let me cite just a few of the many shocking experiences I have had. At a BDS event in Portland, a professor from a Seattle university told the assembled crowd that the Jews of Israel have no national rights and should be forced out of the country. When I asked, “Where do you want them to go?” she calmly answered, “I don’t care. I don’t care if they don’t have any place else to go. They should not be there.” When I responded that she was calling for ethnic cleansing, both she and her supporters denied it.

And during a presentation in Seattle, I spoke about my longing for peace between Israel and the Palestinians. When I was done, a woman in her 60’s stood up and yelled at me, “You are worse than the Nazis. You are just like the Nazi youth!” A number of times I was repeatedly accused of being a killer, though I have never hurt anyone in my life. On other occasions, anti-Israel activists called me a rapist. The claims go beyond being absurd – in one case, a professor asked me if I knew how many Palestinians have been raped by IDF forces. I answered that as far as I knew, none. She triumphantly responded that I was right, because, she said, “You IDF soldiers don’t rape Palestinians because Israelis are so racist and disgusted by them that you won’t touch them.”

Such irrational accusations are symptomatic of dangerous anti-Semitism. Yet, alarmingly, most mainstream American Jews are completely oblivious to this ugly movement and the threat it poses. They seem to be asleep, unaware that this anti-Jewish bigotry is peddled on campuses, by speakers in high schools, churches, and communities, and is often deceptively camouflaged in the rhetoric of human rights.

The American Jewish community and its leaders are not providing a united front to combat this latest threat. Unfortunately, this repeats a pattern of Jewish communal groups failing to unite in a timely way to counter threats against us individually and as a community.

Shockingly, a small but very vocal number of Jews actively support BDS. They often belong to organizations that prominently include “Jewish” in their names, like Jewish Voice for Peace, to give cover to BDS and the anti-Semitism that animates it. A question that we, as a Jewish community must ask ourselves, is whether it is ever appropriate to include and accept Jews who support BDS and directly or indirectly advocate the ultimate elimination of the Jewish State of Israel.

I think it is not.

My experiences in America have changed me. I never expected to encounter such hatred and lies. I never believed that such anti-Semitism still existed, especially in the U.S. I never knew that the battlefield was not just Gaza, the West Bank, and hostile Middle Eastern countries wanting to destroy Israel and kill our citizens and soldiers. It is also here in America, where a battle must be waged against prejudice and lies.

I implore American Jews: do more.

Israel cannot fight this big battle alone. If you are affiliated with a Jewish organization, let it know you want it to actively, openly and unequivocally oppose the BDS campaign and those who support it. Inform yourself, your friends and families, by visiting websites of organizations like StandWithUs, Jewish Virtual Library, AIPAC, AJC and others that will update you and provide information about BDS and anti-Semitism.

I urge the organized Jewish community and its members to wake up and stand up for the Jewish state of Israel, and for all it represents, and for all it works to achieve.

This article originally appeared on Times of Israel.

Hen Mazzig is the Campus Coordinator for StandWithUs' Pacific Northwest chapter in the United States. Hen was in the IDF for almost five years. As a lieutenant in the COGAT unit, he worked as an intermediary between the Israeli Defense Forces and the Palestinian Authority, the UN, and the many non-governmental organizations that work in the West Bank. Hen's unit was responsible for overseeing the construction of medical facilities, schools, environmental projects, roads, water-related infrastructure, and for security coordination with the Palestinian Security Forces, part of the Palestinian Authority.

Why Are Jews Called People of the Book?

Judaism Is Radical
The Blue Beyond
Great Place to Live
Is Eating Supposed To Be Spiritual?
Comments
MOST POPULAR IN Israel
Our privacy policy