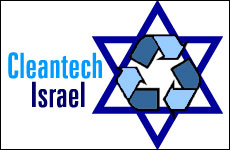 10 reasons Israel is a cleantech leader.

Israel, a global cleantech powerhouse, is now attracting hundreds of millions of dollars in cleantech investment every year.

The country gets more from its soil, water, air, and sunlight than most other nations on earth.

Why has such a small country been able to position itself a world leader in cleantech?

The answer, I believe, is a combination of many factors: its history, attitude of the people, ingenuity, and challenges to survival.

According to my research, the following are major highlights of Israel’s cleantech leadership to date in 2010:

As Al Gore stated in a recent visit, “the people of Israel can lead the way to renewable energy. With its unique geographical position, and cleantech know how, Israel is a natural leader in the field.”

Shawn Lesser is the president and founder of Atlanta-based Sustainable World Capital, which is focused on fund-raising for private equity cleantech/sustainable funds, as well as private cleantech companies and M&A.

From Passaic to the Promised Land: 7 Surprises about Living in Israel

Unity and Tragedy
Scientific Curiosity and the Divine Encounter
Mind Over Milkshakes
Love the Convert
Comments
MOST POPULAR IN Israel
Our privacy policy
Aish.com Is Looking for Great Writers