Seder: The Redemption of Speech 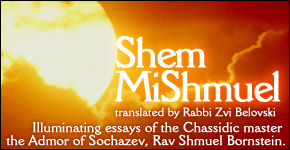 Our obligation to conduct the Seder and relate the story of the Exodus to our children is derived from the following verse:

And you shall tell to your child on that day: "It is because of this that God did for me when I came from Egypt." (Shemos 13:8)

The primary phrase here is v'higadeta, meaning "and you shall tell." In fact, the term haggadah, familiar to all as the name of the book which we read at the Seder, originates from this verse in the Torah. But is telling the only implication of this word? My holy father pointed out that the Aramaic Targum Onkelos always renders this word as "show" or "indicate." This tells us that merely relating the story is insufficient; we must show our children that it is true, whether by deed or proof.

I would like to suggest why relating the story of the Exodus is so fundamental to Pesach and its proper appreciation. The mystics tell us that in Egypt, not just the Jews, but speech itself was in exile. Indeed, the word pesach can be interpreted as two separate words, peh and sach, "the mouth speaks." This means that when the redemption came, the mouth, too, was redeemed, enabling it to speak again. Although this is a complex matter and one of the great Kabbalistic secrets, we can apply the following simple explanation.

We cannot suggest that the Jews never spoke while they were in Egypt, as this is clearly untrue. However, we can propose that they spoke without heartfelt conviction behind their words. The nefesh, or soul, is the root of all human speech, and for this great gift to be utilized correctly the words that flow from a person must be a proper expression of the feelings of his nefesh. Even if he has fully considered the words that he is about to utter, the thought processes themselves are only a guise of the nefesh and do not necessarily reflect the desires of the nefesh itself. Speech can be said to be in exile when the nefesh does not have the ability to express itself through the vehicle of speech. Our Sages teach:

They [the Egyptians] closed up the eyes and hearts of Yisrael through the anguish of the enslavement. (Rashi, Bereishis 47:28)

The effect of the slavery in Egypt was to clog up their "hearts," the nefashos of Yisrael. The labor was so backbreaking that they lost all spiritual sensitivity - their nefashos were unable to communicate with their bodies and express themselves through heartfelt speech. Speech, at least in its most meaningful sense, was indeed in exile. This can help us to explain the following:

Moshe spoke thus to the Children of Yisrael, but they did not hear Moshe because of their broken spirit and hard work. (Shemos 6:9)

Yisrael did, of course, hear Moshe and his promise of redemption, but they had been so broken and desensitized by the bondage that his words had no effect on them at all. They were unable to relay his assurance of freedom to their souls, since, as we have explained, the channel was closed up. When the moment of physical freedom came, this unfortunate situation was remedied. God gave Yisrael the ability to reopen the blocked channel between speech and the nefesh. They were once again able to express the desires of their souls through the power of speech and to influence their souls by listening to others.

This is the intention of the Haggadah; it is a celebration of the redemption of meaningful speech. We must express our true feelings about the miracles of the Exodus when we relate it to our children on this night, and they in turn will be able to take our words and influence their souls. Then our Haggadah will indeed be a true demonstration of the power of speech and a clear proof of the great chesed performed by God on that night long ago.