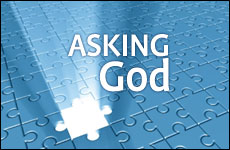 His friend had seven children. He was only asking for one.

Nick and his wife Susan had been trying to have a baby for five years. When the doctors told them that they would be unable to conceive naturally, Susan underwent corrective surgery followed by an aggressive program of fertility treatments. The physical discomfort, emotional strain and financial burden were all taking their toll.

Things were not going well. Nick had just gotten word that because of Susan’s highly irregular cycle they wouldn’t even be able to attempt fertilization this month. He felt overwhelmed by the hopelessness of their situation. His heart was heavy with despair when he ran into an old friend -- a rabbi whose wife had just given birth to their seventh child.

Nick warmly shook his friend’s hand and congratulated him on the birth of his child. But as they caught up and made small talk Nick was struck by the glaring injustice of the situation. Overcome by the contrast between his friend’s joy and his own grief, he suddenly blurted out, “Why is it that God has given you seven children and He won’t give me even one?”

Read related article: How To Get Your Prayers Answered

The awkward silence stretched towards eternity as the question hung in the air between them. Nick’s face revealed his raw pain. After a long pause the rabbi, with compassion in his eyes, gently answered him. “Have you ever asked Him for one?”

That Shabbos, for the first time in 19 years, Nick went to synagogue. He quietly slipped in, took a prayer book off the shelf, and discreetly sat down in an inconspicuous spot. Unable to follow what was going on in the service, he sat quietly, listening to the soft chanting of the prayers. After sitting there for a few minutes he cleared his throat and in his own words began to speak to God. In a whisper that was barely audible he begged God for a child. He covered his face with the prayer book so that no one would see his tears.

Jews pray three times a day, asking God to fulfill our needs. Why is this necessary? Surely the Infinite Creator of the Universe knows what we need without me telling Him? And if we do need to ask Him, isn't three times a day excessive? And is it hypocritical for someone who ignores God for years to suddenly turn to Him for help in times of trouble?

There once was a very wealthy businessman who had an only son whom he loved dearly. Wanting him to have the finest education available, the father sent him to an Ivy League university on the other side of the country. He agreed to provide his son with $600 a month for spending money. "Just let me know if you need more," he told him. Every 30 days his son would phone to update his father on everything that had been happening in his life. The conversation inevitably ended with his son saying, “By the way Dad, I’ve run out of money. Could you please send me another $600?” The father, always overjoyed to hear from his beloved son, was only too happy to send him the money that he needed.

Knowing that his son wanted to feel independent, the father wisely avoided phoning to check up on him. Yet he missed his only child terribly and longed to hear from him. He ached to know what his son was thinking, how he was feeling, what he was experiencing. To wait another 30 days to hear from his child was agony.

One day the father had an idea. He sent his son an email informing him that he was happy to continue providing him with the same amount of money. But instead of sending him a lump sum every month he would provide him with a stipend of $20 daily, available upon request as needed. The father was delighted to find that he suddenly started hearing from his son every day.

God gave us our needs in order that we should pray. He wants the relationship.

God is the Infinite Source of existence -- our loving Father who is all knowing and all powerful. The purpose of prayer cannot be to inform Him of what our needs are. He, after all, gave us those needs in the first place.

The true understanding of prayer is simple yet deeply profound. It’s not that God wants us to pray in order to get what we need. Rather it’s that God gave us our needs in order that we should pray. Prayer is not the means, it's the end in itself.

Prayer is relationship. Prayer is recognizing that the Almighty is the Source of all that I have and all that I need. Everything comes from Him and from nowhere else. To pray is to impress upon myself the fact that God is my Father in heaven who loves me. That He longs to give to me, to shower me with blessing. That He wants nothing more than to hear from me, even if it has been years since we last spoke. Standing before Him and humbly articulating my needs is nothing less than a moment of tender closeness and intimate connection. That intimacy transforms me. It fashions me into a vessel capable of holding the very goodness that I desire, and that is what enables the Almighty to give it to me.

WHEN THE ANSWER IS NO

Of course God, like any loving father, sometimes has to answer no. But we must understand that receiving a negative answer is not the same as being ignored. A parent who ignores his child is making the statement that “you don’t matter to me. You are not worthy of my time or attention.” A caring parent who says no is actually saying, “This is not good for you and because I love you, I am not able to let you have it.”

Because we lack a larger perspective we often cannot understand why God is not giving us what we ask for. These times are the most difficult and force us to draw on our reserves of trust in God. We can take solace in knowing that every sincere prayer is heard. Every heartfelt request makes an impression and has an effect beyond what we can imagine. The request itself intrinsically creates a bond with the Almighty. Irrespective of His answer, it is that bond which is the ultimate goal of prayer.

One year later Nick returned to that same synagogue. Following the Shabbos morning services the rabbi of the congregation was surprised when a man he had never met before approached him and asked for permission to say a few words. The rabbi agreed and Nick stood up to share his story.

He told of how he and his wife had been struggling for years to have a child. He told of their pain and their uncertainty. He told of his conversation with his friend the rabbi, and how almost exactly one year before he had come to their synagogue. He told them how he had sat alone at the back and asked God for a child. “And now,” he concluded, “I have come back. I have come back here one year later because I want to publicly thank God for blessing us with a beautiful baby girl.”

Rabbi Gedalia Kauffman was born in the “Mile-High City” of Denver, Colorado where he learned to snow ski as soon as he learned to walk. He attended university in Boston, earning a degree in Middle Eastern History. Rabbi Kauffman then spent three years travelling Southeast Asia, and ended up in Jerusalem, where he spent nine years learning at yeshivas including Aish HaTorah. In 2005, the Kauffmans were lured to Aish Johannesburg with promises of a maid and a swimming pool.

Understanding Prayer: 10 Short Videos on How Prayer Can Change Your Life

40 Days for a Stranger