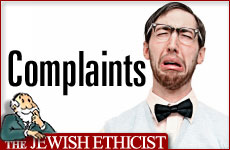 It's dangerous to ignore or punish worker grievances.

Q. I have a worker who is always complaining. Maybe if he is so unhappy I should just let him go.

A. It is true that an unhappy worker can be bad for both the worker and the workplace. In one place the Talmud likens the matchmaking process to the splitting of the sea at the Exodus (1); in another place it likens making a living to the splitting of the sea. (2) Perhaps this is a hint that finding the suitable workplace is a little bit like finding a suitable spouse. If the worker is unhappy, maybe that means that his "workplace made in heaven" is really someplace else.

However, in many cases unhappy workers are the result of dysfunctional workplaces. Your complainer may indeed be a malcontent who should go elsewhere; but perhaps he is a "canary in a coal mine" who could serve as an early warning for workplace problems which should be solved sooner rather than later. The only way you can find out is by listening carefully to his grievances.

Consider the following advice of Maimonides regarding a household servant:

Don't embarrass him, neither with deeds nor with words . . . don't be accustomed to relate to them with shouting or anger. Rather, speak to them gently, and hear their complaints. (3)

Let us consider the Biblical precedents for worker grievances. The Pharaoh of the Exodus seems to have had a liberal policy to allow subjects to express their grievances. The Jewish taskmasters are allowed to complain, "Why do you act this way to your servants? No straw is given to us, yet they tell us to make bricks. Your servants are being beaten yet the fault is with your people" (Exodus 5:15-16). Later, his advisors speak to him quite bluntly: "How log will this one be a snare for us? Send the men and let them worship the Lord their God. Haven't you figured out that Egypt is being destroyed?!" (Exodus 10:7). But with due respect for Pharaoh's willingness to listen, he doesn't know how to take constructive advice. The tragedies that befell his people in the plagues and at the sea are a result of his intransigence.

Sometimes it is indeed true that complaints merely indicate that the worker and the workplace are mismatched. But before you jump to conclusions, take Maimonides advice and listen carefully to your workers' complaints.

The Jewish Ethicist: Long Hours
The Blue Beyond
Great Place to Live
Is Eating Supposed To Be Spiritual?
Comments
MOST POPULAR IN Current Issues
Our privacy policy