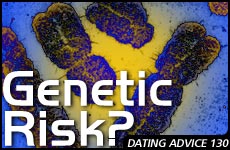 Marriage within the Jewish community has some genetic risks. Pre-testing is the answer.

I have a slightly problematic situation. I am 20 years old and have very strong feelings for one of my cousins.

Our families are very close, and every time we get together, I am excited to see him. I know that I like him for the right reasons -- he's considerate, kind, caring. He is a deep person and very smart. Also, the way he talks to me and smiles gives me a warm feeling inside. He happens to be everything I am looking for in a spouse.

I am getting anxious because I really want to date him, and it's clear that he likes me. But maybe there are problems marrying a first cousin? Should I go ahead with this?

Thank you for writing to us. We know of a number of pairs of cousins who are happily married, and we feel if two people and their families are comfortable with the idea, there is no problem.

On the legal side: Jewish law permits marrying even first cousins, and this is permitted by Israeli law as well. Sherry is a family lawyer and has experience with these issues. In the United States, each state establishes its own laws, and marriages between first cousins are legal in many states.

However, there is something such a couple should do before they begin dating. Because familial diseases have a stronger likelihood of being passed down to children when the parents are related, cousins who plan to date should be tested for genetic compatibility for marriage.

Perhaps you have heard harrowing tales of families whose lives are upended by diseases that cause blindness, retardation, paralysis, and death in early childhood -- diseases like Tay-Sachs, Gaucher Disease, Niemann-Pick, Canavan's Disease, Fanconi's Anemia, familial dysautonomia, and cystic fibrosis.

When both parents are carriers, there is a 25 percent chance the child will have the disease.

All these diseases are autosomal recessive disorders, which means that for a child to inherit it, each parent must carry a copy of the affected gene. Every human being carries two genes for characteristics as benign as eye color and as significant as Tay-Sachs. When both parents are carriers, there is a 25 percent chance that the child will have the disease, and a 50 percent chance that the child will be a carrier of the defective gene.

The diseases we mentioned appear in high proportion among American Jews. Apparently, they began with a mutation in DNA which, because of inbreeding, was passed on, rather than selected out. For centuries, the Eastern European Ashkenazi Jewish community maintained a very successful "intra"-marriage rate. Thus in the Ashkenazi community, 1-in-25 are Tay-Sachs carriers, and an estimated one in seven Jews is a carrier of some genetic disorder prevalent among Jewish populations.

Fortunately, scientists have now reached a certain understanding of the human genome that makes it possible to identify who is a latent carrier for genetic diseases. That's where pre-date testing comes in. A Brooklyn-based organization, Dor Yeshorim, carries out genetic testing for Jews and gives prospective couples the medical information necessary to make an informed decision.

Dor Yeshorim uses a system of blind testing, so that even those doing the testing don't know the identity of the clients. After testing, each individual is assigned a code number. When he or she wants to begin dating someone, the other party's number is matched against his or her own. If both parties are carriers for the same disease, they are informed that their prospective union is "not advisable" and are offered counseling. The tests are done in strict confidence, and only the man and woman involved are told of the results. This avoids the problem of families who are concerned about being stigmatized.

Dor Yeshorim's founder lost four of his 10 children to Tay-Sachs, and then decided to do something about it.

Dor Yeshorim was founded by Rabbi Yosef Eckstein, who lost four of his 10 children to Tay-Sachs, and then decided to do something about it. To date, the group has tested over 100,000 men and women, and such efforts have reduced problems in the Jewish community to where Tay-Sachs is actually more common today among non-Jews.

There are other venues for genetic testing that advise individuals whether they are carriers of specific genetic diseases. These services are useful for people who prefer to "know" all the results of their tests. However, from a personal and professional perspective, we prefer the procedures that Dor Yeshorim follows, especially since a person's status as a carrier of a genetic disease only becomes significant if he or she is about to be paired with another carrier of that same illness.

We recommend that every Jew get tested before entering the dating scene, and that two people find out whether they are compatible for marriage -- either before they begin to date each other or very early in the courtship process. If you wait, there is the possibility of discovering that both the man and woman are carriers, and then comes the difficult decision: Should we get married with all the attendant risks for our future children? Or do we suffer the heartache now of calling off the marriage?

So we recommend that all single men and women get tested before they start dating, and certainly before they consider engagement. In the case of first cousins, the pre-testing is even more crucial.

We hope that everything works out for you.

Dating Advice #194 - Over My Dead Body!
Why Are The Prayers Of Yom Kipur So Repetetive?
Ha'azinu 5783: A Time for Unity!
Twisted Thinking
Comments