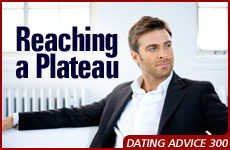 He’s growing Jewishly and his life is in flux. Does that rule out dating for marriage?

Two years ago, I ended a three-year relationship. This woman and I were both Jewishly involved, but neither of us was interested in religious life. However, after our break-up I took a good look at myself and decided that I wanted a more spiritual connection. I started eating kosher and keeping Shabbat. I also gave serious thought to what I wanted in a marriage partner and decided to put off dating for a bit. I wanted to get a better sense of how I wanted to grow Jewishly before focusing on marriage.

For the next year and a half, while I finished graduate school, I also concentrated on learning more about Judaism. I decided that the next step in my growth was to study Torah in Israel, which I have been doing for the past few months. My growth during this time has been quite invigorating, but in terms of dating it has put me in a state of flux. The more I learn, the more I realize there is to learn. I just don’t feel like I’ve reached a point where I can take a step back and see exactly where I have landed.

The consequence of all this is that I've put off dating even more.

I understand that I will probably continue to grow and develop spiritually throughout my life. But I also know that there will come a point when I will be more firmly grounded and ready to start dating for marriage. My question is: How do I know when I am at that point?

As you have suggested, most men and women who decide to become more Jewishly observant discover that they're only at the start of a lifelong journey. They may never have imagined that there are so many areas in which to grow and develop as a person. They also want to grow in their commitment to and understanding of Judaism before making permanent life choices about a marriage partner. This ongoing process can be as overwhelming as it is fascinating, and one of the most frequent questions asked is, "How do I know when I've reached the point in my growth that I'm ready to start dating for marriage?"

Clearly, before re-entering the dating maze, you will need to reach some plateau in the direction you'd like to continue to grow. This has two aspects: what we call emotional maturity and religious maturity. It takes time to integrate a new “Jewish” lifestyle into one’s life and to truly make it a natural part of yourself. There’s so much change taking place, with so many new experiences to process and habits to integrate, that it takes a while to really figure what is “you” and what isn't.

Besides your new thought patterns and behaviors, you will also need to clarify basic issues such as what kind of a Jewish home you want to have, what type of community you wish to settle in, and even the basic issue of whether you will ultimately decide to live in Israel or America.

Your journey will inevitably include some twists and turns in the path.

There is no hard and fast answer to this question, but we can give you some helpful guidelines. One of the most important criteria that should be in place before dating for marriage is to know the general direction you want your life to take, and to have a reasonable idea of the path you’ll use to get there. You'll also need to be somewhat flexible, because that journey will inevitably include a few adjustments as you encounter some twists and turns in the path.

Even though you began to become more observant two years ago, with your intensive experience in Israel, it sounds as if you're still in the "steep learning curve" stage of the process. You're still learning some of the basics of Jewish observance, as well as some of the textual foundations for Jewish law, history and thought. It takes time to integrate these new ideas and information, and while it may seem a bit overwhelming at first, you'll gradually acquire more knowledge and more clarity about yourself. Surely there are many who have been down this road before who can give you encouragement, guidance and advice during this process. If you haven't yet found a mentor who you can turn to with many of the questions you have, we recommend you do so.

In time, you won't feel as overwhelmed with new information and choices, and you are likely to find yourself gravitating to a direction that you feel comfortable pursuing. You'll have a better idea of where you can see yourself (in terms of religious growth and where you would like to be in other areas of your life) in six months, in a year, and in five years. Your growth in these areas will also help you gain a new perspective about your character traits, and you may decide to work on developing some of them in a way that will help you become the kind of husband you want to be. As you gain clarity in these areas, you'll be able to figure out what qualities you're looking for in a marriage partner.

That's when you'll be ready to start dating.

It may be a matter of several more months before you feel that you reach this point, but don't be discouraged if it takes another year or more. It's better to start when you're ready, than to succumb to pressure you may feel because you think you should be married at your age; or because other people you know are getting married; or because you feel lonely and want to find a partner with whom you can build a Jewish home. We've seen what happens when someone starts dating too early in the ba'al teshuva (newly-observant) process before they've had time to gain a basic understanding of Jewish observance, figure out the direction they want to take, and feel secure about their worldview and lifestyle. It can add unnecessary confusion to an already confusing dating process, and can cause unnecessary complications further down the road if either partner later makes a major shift in what they want out of life.

We wish you success in your Torah studies and beyond.

What Makes Eli Run?
The Tyranny of Materialism
Science Enters the Mysterious Inner World of Consciousness
BBQ Bourbon Cheese Kugel Recipe
Korach 5782: Visit to Lift the Spirit
That Time The Ivy League Found A Way To Limit Jewish Enrollment
Would You Rather Be Right or Happy?
Korach’s Unique Punishment
Who Was Josephus? The Controversial Backstory of the Famed Historian
Should I Break Up, Get Engaged or Keep Dating?
1 2 3 … 2,945 Next »