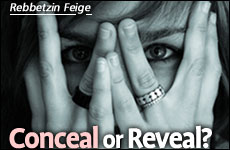 Should I let people know about my hearing disability?

Dear Rebbetzin, Due to a unique form of congenital hearing loss, I am severely hard of hearing. I hear well in quiet situations but I'm deaf without my aid, and I'm completely deaf in one ear.

Even people who know me well don't realize how difficult it is for me, moment to moment, because I wing it and leave myself out of interactions on purpose. I don't highlight my hearing loss and I am left feeling more or less by myself when in the presence of groups. Thank God my speech is completely normal -- even the audiologists are amazed by my case, since it is so unusual. I have not made my predicament known to most because I realize that maybe I am here to be sensitive and quiet. I relate really well only to those who are sensitive enough to realize that I am not like everyone else.

I am blessed with a beautiful, normal hearing family, and I'm especially grateful knowing that each of my kids will be more sensitive and honest with themselves. Since I'm not able to converse in groups and lack the ability to catch others conversations, I'm grateful for the ability to close my ears to gossip and negative talk.

But I realize that if I don't share my story, I will forever hide something that maybe shouldn't be hidden. Should I remain hidden? If not, then how and when should I proceed with my little secret?

Your story is quite remarkable. A lesser person in your situation might have chosen to view herself as disabled and victimized by life, whereas to your credit, you have chosen to compensate, cope and even glean unexpected benefits from your situation. The resolution to your conundrum of whether to keep or divulge the "secret" of your condition depends on more information and self knowledge.

For starters, my dear reader, it is noteworthy that "tzniut," privacy, is a great value in Judaism. This is not appreciated in our times; it is at polar opposites with the over-sharing, "in your face" mode of our current cultural environment. Consider the media, the talk shows, and the internet -- all of which have rendered privacy virtually non-existent. Every last gory detail of a person's life is free game and baring not only one's body, but one's soul in public is stylish, encouraged and rewarded in our society.

Such open exhibitionism, however, is an anathema to our Jewish sensibilities and a flagrant violation of the value of "tzniut," modesty, that is so integral and sacred to our essence.

Our Sages define the parameters of "tzniut" by citing, among others, two significant examples that seem, at first glance, contradictory. The first is that of King Saul. The Book of Samuel relates that he was a man "head and shoulder" above any other in the nation. He was humble to a fault. He did not seek nor desire the honor of the monarchy. When the prophet Samuel sought to anoint him as king, Saul could not be found. He was "hidden amongst the vessels," the verse states. He was the reluctant king and acquiesced to accepting the position solely in deference to God's will.

Shortly after his coronation, he set out to find his father's lost donkeys. Along the way, he met his uncle. The ensuing conversation between them consisted of nothing more than a question about the whereabouts of the donkeys. Our Sages comment how remarkable it was that in the wake of his coronation Saul did not see it necessary or desirable to mention to his uncle that he had just been appointed the first king of Israel. We would think that it's not every day that someone achieves a position of such distinction. Indeed, our Sages teach that it was King Saul's heightened sense of modesty that dictated his behavior. To his thinking, knowledge of his appointment was not relevant to the conversation and his sharing it would have served only as an expression of ego and self aggrandizement.

Curiously, the other model of privacy and modesty cited takes a different, almost opposite form. Our beloved matriarch, Rachel, an ancestor of King Saul, was set to marry the patriarch, Jacob. He had worked seven years for her treacherous father, Laban, in order to earn her hand in marriage. Jacob and Rachel were both aware that Laban was the master of deceit. Fearful that he would pull a fast one and substitute her older sister, Leah, in her place, they contrived a secret code between them.

"Tzniut" is the wisdom to know when to conceal and when to reveal.

On the night of the wedding, unbeknownst to Jacob, it was indeed Leah, and not Rachel, who was placed under the wedding canopy by her perfidious father, Laban. The remarkable twist in the story is that Rachel, who had waited seven years to marry her beloved, had divulged the secret code to Leah so that her sister would not be publicly humiliated and shamed. This self-negating and sacrificial act of divulging and sharing is heralded by our Sages as the ultimate in "tzniut."

Our Sages simultaneously identify both Saul's withholding and Rachel's sharing of information as expressions of "tzniut." In reconciling these opposite responses, the definition of "tzniut" emerges as the wisdom to know when to conceal and when to reveal. In Saul's situation concealing was the appropriate behavior; in Rachel's case revealing was the ideal response.

What did both of these opposite behavioral responses have in common? Both behaviors were driven by objective value and not subjective bias and personal concerns. Saul revealing the information would have served only his ego and helped no one, whereas Rachel's communication of the codes is not only counter-intuitive to her own ego needs, but truly altruistic.

Hence, my dear reader, one of the factors to consider in your decision to conceal or reveal is who is better served by this disclosure of information. Consider your "normal" children. Is it better for them to have a mother who appears also "normal" like other mothers, or will they see you as harboring a secret that is a pretense? Will they see you as courageous in not drawing attention to yourself and making others uncomfortable in the process? Or, will they view you as reluctant to appear vulnerable?

Who is better served by this disclosure of information?

Of course, your feelings and needs must be taken into account. Are you burdened by your "secret" and stressed by the need to constantly make accommodations and keep up appearances? Do you feel deprived of more extensive socializing? Or is your overriding feeling one of relief, as you mentioned in your question, from the inane, pointless, and often deleterious chatter and conversation?

You do mention there are a few who have taken notice and have been inclusive and sensitive. Do you think that going public will enlarge that circle of friends and broaden your horizons? Self knowledge is crucial and you must, as in all conundrums, assess the cost versus the benefits.

Barring information not included in your question, my sense is that the position you have taken until now has served you well. You have a "beautiful" family and have cultivated an appreciation for the blessings that are byproducts of your challenge. "If it ain't broke, don't fix it." Clearly, there is dignity in a private posture. Our Sages comment that blessing dwells in and adheres to that which is hidden from the eye.

Talking things over with a third party who knows you and your situation would be advisable. Share the pros and cons and may God give you clarity. Whatever your decision, I am certain you will discharge your responsibilities with grace. If you choose to stay with your private mode, the above stated will apply. If you judge the time has come to reveal, to go public, perhaps others will be inspired by your story, and your ability to embrace a challenge so effectively. It is a win/win situation. Good luck and God bless you.

Anger Management
Lessons from the Book of Jonah
Where Are We? The Body, Brain, Soul Problem
Dr. Sheila Nazarian’s Escape from Iran
Comments
MOST POPULAR IN Family
Our privacy policy
Aish.com Is Looking for Great Writers