Kaddish for My Father 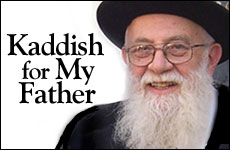 It's been 11 months since my beloved father left this world.

Today marks the end of the11th month since my father, Rabbi Noach Weinberg zt"l, passed away. This day is not marked as an official day that one has to do anything specific other than to stop saying the Kaddish prayer. But for me it's an especially sad day.

Essentially, this is the first time I have to deal with mourning. I have learned that there are four stages in the mourning period. The first stage started from the minute I found out that my father passed away until the burial. This stage is obviously the most painful.

The second stage begins from the burial and goes through seven days of sitting shiva. These seven days are a mix of pain and comfort, where so many friends come to console the mourners.

The third stage is sheloshim, that starts after shiva and goes for 30 days from the burial. On those days, even though the pain is still present, it starts to get mixed into other areas of life.

The last stage is the completion of the year since the death. At this time, the pain surfaces at different times in one's daily routine.

Our Sages devised such a wise way to mourn and find comfort. King Solomon wrote that there is a time for everything, including a time to be happy and a time for sadness. Why do we need a time for sadness? During this period, I've learned to appreciate this teaching. Being sad presents an opportunity to grow and gain a deeper understanding about the meaning of life and the correct way to handle a crisis.

During the first stage, from the minute that my father passed away, it was impossible for me to even talk. The pain and the sadness were so intense. The ceremony and the funeral afterward felt like a non-ending darkness. I felt like I was going down without any hope that the pain would subside. At the funeral, there were so many people who came to give their last respects to my great father, but I was someplace else, even though I was right next to him.

Then came that moment where I was forced to speak. Fortunately, these were the first words that I needed to say: "Yisgadal V' Yiskadash Shemay Raba..." – reciting the Kaddish. Suddenly I felt I'm not alone. I remembered that I have the Almighty to rely on, forever and ever. I felt not only the pain of the loss of my father, but also the opportunity to remember him and everything he taught me through this special way of sanctifying and praising God's name. From that moment, I felt that I was starting to climb upwards and had hope that happier days were to come.

Everyday when I have the opportunity to say the Kaddish prayer, I reconnect to this emotional healing feeling. So today when I need to stop saying Kaddish, it's an especially sad day.

Although it's hard for me to stop saying Kaddish today, to stop using this tool that enables one to have a stronger spiritual connection with God, as well as with my beloved father, it's much easier to stop, knowing that this is giving honor to my father.

I will definitely continue to learn in the merit of my father, to continue this meaningful connection.

During this year of mourning, one of the things that I have gained was a long conversation with my father. My father has left behind a priceless treasure -- his teachings on so many topics and ideas. Whenever I would have something on my mind, I would dive into this sea of knowledge and listen to his words. I see this as a special privilege for me. I have received a priceless gift and I wish to share it with the whole world.

Yehuda Weinberg is the COO of Aish HaTorah.

The Greatness of Rabbi Weinberg, zt"l