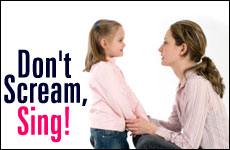 A text from the Middle Ages yields effective parenting advice.

Sarah had five healthy, happy and energetic children, who naturally capable of all kinds of behaviors that could drive any parent insane. But I never saw Sarah show any signs of losing her cool, not even for a moment. She had bright blue eyes that always reflected a sea of calm, even when her home seemed to be a sea of chaos. She spoke softly and smoothly, despite situations of ear-splitting whining or high racketed sibling contention.

Although I knew Sarah when I was still single and clueless as to how challenging it is for a mother to keep calm at moments like this, I knew enough to sense that Sarah was different than most parents.

On one particular occasion as the two of us were engrossed in conversation, Sarah’s five-year-old son picked up a gift wrapped glass door sign that had been purchased for his newly wed uncle. His mother glanced in his direction and stated calmly, “Please put that down, I do not want it to break.”

He continued to handle the fragile present. “Please put that down, it could break.” But he did not put it down.

After another minute we heard the fall and the glass breaking. Wordlessly, Sarah bent over picked up the cellophane package of shattered glass and put it on the table next to her. She locked her eyes into her son's and held them for a few moments before she turned to me and fluidly picked up the conversation where it had been interrupted.

I expressed my awe and begged her for her secret to serenity.

When Sarah’s son guiltily slunk out of the room to find entertainment elsewhere, I expressed my awe and begged her for her secret to serenity. She relayed to me that a few years back she had gone to see Rebbetzin Kanievsky, the wife of Rav Chaim Kanievsky, one of this generation’s leading Torah leaders. “What can I do to ensure that I am a good mother?” she asked.

The wise elderly woman replied that twice a week she should read Iggeret HaRamban, a letter that Nachmanides, the 13th century sage, wrote to his son. In this letter, he gives us key advice for being the people we want to be, highlighting especially the importance of humbling oneself before all and speaking calmly at all times. Sarah assured me that it was strictly due to the constant reviewing of this epistle that she had become the tranquil person that she was.

So here I am, nine years later and mother of three healthy, bouncy children of my own. Never having considered myself an angry person by nature, it would have been impossible for me to have prepared myself for the challenge of controlling my temper as a parent. On the contrary, I had always been so proud of my easygoing personality and the lack of strife in my relationships. I have clear memories of seeing strangers scream at or even hit their children in public and being sure that only a psychotic person could be capable of such behaviors. So this new sensation of anger-born heat oozing through my body was a rather odd phenomenon. These foreign urges that filled my gut genuinely embarrassed me. Could I be of the same species as those crazy people in my memory?

I remembered Sarah's secret ingredient to being a calm mother. I reached for my copy of The Ramban's Letter from the shelf, wiped off the film of dust that had formed, and began to inculcate its messages into my being.

“Accustom yourself to speak gently to all people at all times and this will save you from anger, a most serious character flaw which causes one to sin.” The concise letter works through stages of personal growth from bridling anger to acquiring humility to developing a deeper connection to God. The recipe begins with nothing more complicated than simply speaking gently. He boils it down to simply not raising our voice. Conquer that and you have conquered yourself -- no easy feat.

The Ramban’s Letter has proven extremely helpful to many. In fact, it is not a logically explicable process, for reading the letter one time does not mean it actually went in to the heart and the reader is changed forever. But the letter ends with a promise that whoever reads the letter at least once a week will see success and his wishes answered. This pertains to all wishes, but especially to those reading the letter in hopes gaining self control and humility.

Rabbi Avraham Chaim Feuer wrote a beautiful booklet, A Letter for the Ages, in which he expounds on each line of this ethical letter. He explains that when a person feels that things are in his control, he becomes anxious from even slightly stressful situations because he imagines that the entire world demands his attention and reaction. So he shouts back, raising his voice in attempt to regain power over the reins that were never in his hands.

On the other hand, a person who has learned to trust in the Almighty is calm and composed because he is soothed by the knowledge that God has everything under control. He is free to speak softly and gently because he has no need to prove himself to anyone, not even to himself.

A regular Monday morning poses enough opportunities to turn any mother into a hollering prison warden -- someone woke up late and his ride is arriving in 15 minutes, another does not want to eat this for breakfast and yet another can’t find anything to wear. The stressful voice says, “Everyone is counting on me and demanding my solutions, yet no one is listening to my directions. I can’t handle this all at once, so I’ll scream at them.” But the Ramban give us an alternative: Keep your voice down. Screaming will only exacerbate the tension.

We cannot control our children, but we can love them and believe in them.

We cannot control our children, but we can love them and believe in them, and then love them some more. A mother’s job on a Monday morning is to be a source of love and warmth and support -- encourage the late riser that he can be ready on time, sympathize with the dissatisfied breakfast customer, and hug the frustrated teenager who has “nothing to wear.”

There will always be those tough moments when we feel the weight of our words trying to burst forth in anger and we're fighting to hold them back. It’s like walking on a greased tightrope and we're not sure how long we can keep balanced. At those times, “When you want to scream, sing, and when you want to hit, tickle!”

When those impulses begin to arise in your gut and suppressing them will be short lived, just go ahead and let them out -- but in another form. When you feel like yelling at the top of your lungs, your gut will be just as satisfied if you sing at the top of your lungs. Belt out your favorite jingle, or make up your own. (My favorite sounds something like this: “No one can make me scream right now, no one can make me lose my temper…”)

Kids think it is funny to hear their parent perform an opera while the house is falling apart and they really don’t care what the words are. So why try to bottle up forces so powerful?

As for the embarrassing and sometimes scary and always illogical urge to smack a child, ward it off by tackling that child -- then giving a loving tickle. I promise you, this technique not only works at getting rid of the horrible impulses, but it usually snaps the whole house out of cranky, whiny power struggle mode and back into harmonious cheerful chaos. Try it!

for an online English translation of The Ramban’s Letter.

Click here to order “A Letter for the Ages”, By Rabbi Avrohom Chaim Feuer, Artscroll publications.

Rivka Zahava spends her days as a happy housewife and mother in Tel Tzion, Israel. She is a graduate of Haddassa College of Optometry.

4 Ways to Build Resilience in Kids

In the Blink of an Eye
Vayelech 5783: Regret and Repent
Rabbi Sacks: Focus On the Important, Not the Urgent
Put Your Foot Down: Are Human Feet Poorly Designed?
Comments
MOST POPULAR IN Family
Our privacy policy
Aish.com Is Looking for Great Writers