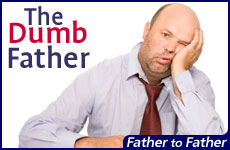 Too many fathers think parenting is a woman's domain.

Friends of mine, a couple in their late 30s, recently asked for advice:

“Monica, our 6-year-old daughter, just started first grade," the mother began. "She’s very unhappy, but she won’t tell us why. She comes home in a sour mood on the verge of tears, saying she doesn’t want to go back and she has always liked school."

I turned to Dave, her husband, who nodded solemnly in agreement.

“She is an adorable girl,” the mother continued. “Lately she doesn't seem to want to play with friends and she is noshing all the time."

As it turned out, the little girl confided in her big sister that during recess she asked the other girls if she could play with them and they cruelly said “No.” Their daughter was filled with shame and embarrassment.

The mother wondered if she should talk to the teacher or the principal, and then said something about bullying in schools –- an obviously very important topic. The mother spoke for both of them as the father sat quietly. But Dave, who I knew from a variety of circumstances, is no dope. He always has something pithy or on the mark to say about whatever might come up in synagogue or in the study group we both belong to.

I turned to Dave: "What’s your take?"

“Everything my wife says is true. Monica is not a happy camper, though she usually is.”

The mother and I brainstormed some more. Dave said nothing. His silence suggested that he was receding and tuning out. He was in the room in presence only.

I wondered why. Maybe he had his own memories of being bullied. That would be most natural because our children’s experiences almost always evoke our own childhood.

But many men are reluctant to contribute emotionally at home because they feel it is “their wife’s territory.” In many homes the mother is the unspoken head of all the touchy-feely emotional issues. She’s the resident expert and the man automatically yields to her expertise.

But is it really yielding? Dave isn't the type to yield easily. He is a competitive guy on the court, at work, even at shul. He doesn’t like to lose.

Popular media is forever reducing dad to a well-meaning boob-in-chief.

You want to know a secret? Most men don’t like to lose and they are unlikely to play if they think they will. And at home we lose most of the time -- the wife knows the ins and outs in ways that men don't know. So some men stay out, or out of desperation, they unwittingly thwart their wives.

Popular media is forever reducing dad to a well-meaning boob-in-chief -- an emotional, clueless klutz and a figure of fun. (Think: The Simpsons, or Berenstain Bears.) But the Torah takes fatherhood very seriously. The Jewish father is most decidedly not a clown.

The Torah says, "Shema bni mussar avicha v’al titosh Toras imecha -- Heed the lessons of your father and the teachings of your mother." A child must hear from both.

I brought up the idea with Dave. Why didn’t he speak? Why did he treat himself as though his job was just to show up, shlep furniture, and write checks?

He gave an embarrassed smile. “I’m not so sure of my place,” he finally offered. "Many times, I’m not sure what to say or do, so I leave it to those more competent than me,” he said, gesturing toward his wife.

I offered a question or two: What was Monica’s play like at home? Did she play at least some of the time with her father as well as her mother and sister? This was discussed for a short period, and then a few minutes before we were to end, Dave said he had an idea: Monica should take along an attractive toy -- maybe even a disposable camera with a flash, and instead of asking to play, she should say, “Who wants to take pictures with me?" A lot of kids will gravitate to her.

“Kids need gadgets,” he said rather succinctly, “to get things going.”

It was natural that a man would come up with this idea, I thought. Men have an instinctive feel for the usefulness of tools in the school yard and in social settings, the new bicycle, the sophisticated electronic device, a cool car.

David knew he had a good idea, (we later found out it was a bulls-eye with Monica) but then he had a revelation: “I make myself ‘dumb’ in front of my wife. I tell myself I am being gracious or whatever, but truth is, I really don’t know why I do it. I’m probably just afraid to compete,” he offered somewhat in jest.

I thought there was more than a little truth in his words. Fathers, when you are tempted to “go dumb” in front of your family, consider that you may be trying to avoid uncomfortable feelings, you may fear that you will look foolish in front of her or in front of the family or yourself.

There are few things more damaging to a child than an absent father.

You must resist these fears and speak up anyway. Your children need you. There are few things more damaging to a child than an absent father. Even if you don’t have the vaguest idea of what to say to or do, have no fear! You may goof up and say or suggest the “wrong” thing, but time and experience will teach you to get it right. And for goodness sakes! Take advantage of those runs to the supermarket to spend some “alone” time with your kid. Ask your son questions he will want to respond to. Take an interest in your daughter’s school and play life. Ask them what they want from life, from you.

Mothers, pull back. Create a space for the fathers to enter. Resist the temptations and false satisfactions of being the “superior” parent. If your husband goes “dumb,” encourage him to talk.

The worst thing either parent can do is withdraw from the game. If both mother and father play, everyone wins.

PODCAST: When You Suspect Your Child has a Mental illness

The Gift of Presence: What Your Loved Ones Really Want
Were Adam and Eve Jewish?
How I Learned to Love the Multiverse
10 Big Jewish Inventions
Comments