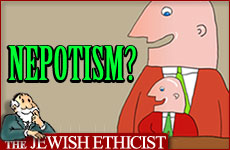 Is it ethical to show favoritism to family members?

Q. I'm a manager in a medium-sized company. I have to hire a new employee and I want to hire my nephew. Is that nepotism?

A. "Nepotism," which is derived from the root for "nephew," is the practice of showing favoritism in hiring to relatives. When we evaluate this phenomenon, we have to examine both the inherent aspects of the practice and also the appearances.

Let us start from the fundamentals. As a manager, your job is to use your talents in the best interest of the company at all times. If your nephew is in fact the best qualified person applying for the job, then there is no question that there is nothing unethical about hiring him. But there are a number of marginal cases which need further study.

Perhaps your nephew's CV doesn't look any better than those of other applicants. But you know your nephew well and know that his CV is accurate, that he is qualified, and that he is not a crook. Your individual knowledge makes him the best looking candidate. I would call this "knowledge nepotism" – his family advantage is one of knowledge, not of per se favoritism.

A variation on this case is where your nephew is not inherently more qualified than anyone else, but he is worth more to the company precisely because he is your nephew. This employee already has a good relationship with at least one manager (you) and so he has a leg up on other candidates that is in fact related to his expected job performance.

Showing favoritism in these cases is not a breach of trust because ultimately you do have the company's best interest in mind. You have a stack of CV's, and one candidate has a better chance of succeeding than the others, either because of what you know about him or because of his relationships.

However, this kind of favoritism is not without problems. You may know in your heart of hearts that you have the best interests of the company in mind, but the company may suspect that when people hire relatives they are showing favoritism. In addition, different companies have different cultures. Some firms thrive on having a homogenous work force and culture, so in-hiring can be an advantage. Others have policies promoting diversity, which is harmed by in-hiring of this nature.

Think twice before hiring a relative.

So in any case, before you show any favoritism to a relative you should disclose this fact to your employer. Even if you are convinced that your relative is the best qualified the safe thing is to make a disclosure. Many firms have policies requiring employees to make disclosures or even recuse themselves in making decisions about relatives. Large firms sometimes have blanket prohibitions on close relatives working together in the firm.

The most problematic case is where your nephew is not the most qualified candidate but you want to favor him because he is your relative. In this case you have in mind not the interest of your employer but rather your own interest. If you were to keep this a secret, it would be called self-dealing. But if you disclose it, it could be called a "perquisite". It is not forbidden for private companies to do favors for employees. Employees obtain recompense partially from salary and partially from work conditions, including perquisites such as espresso machines and nepotism.

This problem is solved by transparency in the case of a family run firm. In that case you could get permission from the owners. But in the case of a professionally managed firm, such as one with public ownership, this is a big problem. You can get permission from the senior management, but they are not the owners. Perquisites in firms like this can turn into a series of trading favors among managers at the expense of the owners. Perquisites like fancy office buildings have the advantage of transparency, but favoritism is invisible and it is the "gift that keeps on giving": an incompetent employee does ongoing damage to the firm and may in turn show favoritism to others.

In all cases of favoritism where you can't get the approval of the actual owners of the firm, I would recommend recusing yourself from the decision. Detail all of your considerations to colleagues so that they can benefit from your judgment without being subject to any prejudgments you may have.

Last, but far from least, I want to give readers the benefit of my own experience. I have found that hiring relatives and friends is usually not doing them a favor. If they are truly qualified and capable, then often they are limiting themselves by working for the family. The result is harm and frustration for the hire which may translate into harm to the employer to. Some studies confirm that people actually do better if they avoid the family business. And if they are not qualified and capable, they generally end up being an expensive and aggravating burden. So ethics aside, think twice before hiring a relative.

The Jewish Ethicist: You Need This

The Jewish Ethicist - Adding to Your Data Base