Getting Kids to Listen 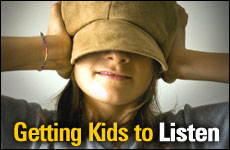 How to keep quiet so your kids will listen.

Would you like your children to listen to you?

My wife and I would. We tried all the famous techniques, but none of them worked. Our children preferred to spend all day in a “time out” rather than not have their way. Even charts and prizes for good behavior failed -- the children would rather fight for their cause than earn a checkmark. Or as soon as the chart was finished, so was the good behavior. What about the old-fashioned spankings (i.e., child-rearing)? We hoped to find a gentle and loving way to deal with the children.

It seemed that our only option was to break down and cry until all the children grow up and move out. Thankfully, before this happened, we found some supportive friends and mentors who have been successful with their own children. Over time we developed an approach that has been as successful as we could hope for.

First, we accepted that children are new at being human; it takes them time to learn basic etiquette. They’re completely self-centered from birth, and the maturity for true altruism only starts 12 or 13 years later. Children really don’t know (or care) how to sit nicely at the dinner table, how to put their toys away, how to close the door behind them, how to talk nicely to each other (or to their parents) when they are upset, and they don’t even know to keep their fingers out of the electric sockets. Yet these were our demands, which we thought were reasonable.

We lowered our expectations. We don’t have to criticize the children now for something they will naturally outgrow later. We will still ask the children not to climb onto the dinner table, but now we’re relaxed about it. We don’t expect instant obedience.

Another point we needed to work on was timing -- certain times are not appropriate for discipline. When a child is hungry or overtired, they can’t control themselves. They may seem rebellious, but we shouldn’t take it personally. Rather, we try to give them a snack or put them into bed for an afternoon nap.

Another area where we had to lower our expectations was sibling rivalry. Our friends explained that it a natural part of creation and it defies logic. As long as the fighting isn’t too dangerous (put the scissors down!) then we let the children find their own solution. No matter how fair you try to be, someone is likely to accuse you of taking sides. It’s better the children should have a grudge against each other, which they’ll forget about in a few minutes.

So far we stopped criticizing our children for acting immature because they are immature. We stopped criticizing them at times when they are tired or hungry because it won’t help. Also, we’re not getting involved with sibling rivalry. This means there are a lot fewer times that our children aren’t listening to us. But, isn’t this avoiding the issue? Also, what if our nerves are shot and we really need some peace and quiet? And what if the fighting is getting dangerous?

We try not to wait that long. If we interfere earlier on, the children are less emphatic and more likely to listen. Also, WE are still calm and thinking clearly. We might stop a fight by asking, “Children, what’s going on?” Each child gets a chance to say his or her side of the story. Then we might ask, “What do you think you should do?” The children often find their own solution (though a touch of parental guidance may be necessary).

Sometimes we can make peace by issuing a generic command. “WE don’t hit.” Or, “WE use an in-door voice in the house.” This gets our message across without offending the perpetrator. But it is much safer to avoid the issue. I try to assess which child is the most out of control, and then distract him or her. For example, I might call one of them over to help with an unrelated activity. “I need help fixing the cabinet. Would you like to use the power drill?” Or I point out an opportunity to play alone, “Why don’t you go to the patio and ride the tricycle now -- nobody else is using it!” It’s even enough to say, “Hey, come look what’s out the window... oh, a bird!”

What if we fail with the diplomatic approach? Sometimes the “magic voice,” (also featured in “Dune”) slow and monotonous, will lull the children into obedience. “Now-it’s-time-to-go-upstairs-and-go-to-bed.” Sometimes the only cure is to give the children a moment to themselves to calm down. “Go to your room and rest for a little bit.” We might even give them some music to listen to, a book to read, or a favorite toy to play with. Still, we view the “time out” as a rare necessity, not for every-day use.

You might think that we are only lowering our expectations and avoiding confrontation; we’re not actually teaching our children to listen to us. But when we gave orders that the children were not likely to follow, we were inadvertently training them NOT to listen to us. The more we keep quiet, the more receptive they will be when we have to be direct.

We do find opportunities to make direct requests -- when everyone is calm. “Please give me that book from the shelf,” or, “Please bring me a glass of juice.” But even when we give orders, we try to speak to our children as politely as we would speak anyone else. We respect them. In turn, they respect us too, most of the time.

Elyah Leboff is originally from Malden, MA, and now lives in Kiryat Sefer with his wife and children. He is a tutor for advanced Jewish studies, and also works as a translator and writer.

The Myth of Perfect Parenting

The Gift of ADHD
Don’t Believe in Other Gods Versus God is One
Seeing Without Eyes
Why Shouldn’t We Eat Whatever We Want?
Comments
MOST POPULAR IN Family
Our privacy policy
Aish.com Is Looking for Great Writers