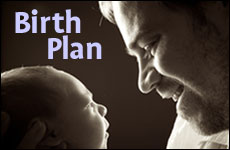 Our pregnancy was uneventful, as pregnancies go. My wife's only complaint was mild back pain, and regular physiotherapy remedied most of that. As we approached our 35th week, everything was fine: the baby was big, my wife was healthy and I was devouring baby and birth preparation books.

Then one day my wife really didn't feel good. Her back pain was acting up badly so she stayed home and made an appointment for the physio. When I arrived home that evening, she still wasn't comfortable so we called our ante-natal teacher who suggested a bath and two Tylenols. I'm the obsessive compulsive half of our marriage, so seeing that she was getting intermittent pains, I began timing the intervals surreptitiously.

As I was casually scribbling down every grimace and scowl, I decided maybe it was time to call the doctor. My wife graciously compromised and said we'll wait to see if there would be another two sets of spasms. Sure that this was it, I disappeared inside and began stealthily to pack the bag for the hospital, when my wife walked in.

"What are you doing?"

"Oh, but it really is nothing. You just go rest."

That's when I discovered that hell hath no fury like a woman in labor (especially when she knows she isn't in labor). "Stop putting pressure on me! This is not labor and we are not going to the doctor! It's just back pains. I don't want anything packed. Why are you panicking me?"

Five minutes later we called the doctor and he pooh-poohed me too. "No, it's not labor, but if you really feel you'd like to go to the hospital, go have a test to put your mind at ease."

Another two spasms later, we arrived at the hospital at 10:00 pm. By 10:40, the nurse determined that we were in labor; in fact, my wife had gone 70% of the way without even knowing it. This was serious -- we were over five weeks early.

The level of intensity suddenly soared. We rushed to admit her. The doctor was called and prescribed hormones to stimulate lung development of the fetus and a whole wad of drugs to try to stop the labor while I ran around getting Medicare authorisations and drugs and admission forms.

Just before midnight our doctor called me on my phone. It was a hurried, tense and horrible conversation. "Look, I don't think we're going to be able to stop this labor. We're going to try but I don't think it's going to work. If we can delay it just for 24 hours to let the hormones get to work, it will make a large difference to the baby's health. Without that time, the baby is likely to have serious difficulty breathing. Either way, you have two to four hours till we know if the drugs will work."

I put down the phone. My wife and I looked at each other and started praying. "God, please let the drugs work! Please let the labor stop!" Over and over we pleaded for the same thing -- for the labor to halt, for our baby to get to full term. "Just another five weeks! Please!"

Then we looked at each other, simultaneously reaching the same conclusion. "Maybe we should just ask God for this to come out the best way possible in His eyes. Maybe our baby is meant to be born now," she said. I nodded. We began praying for that instead, trying to trust God to pull us through. "We trust you God. Help this come out the way You want it to."

"You better get upstairs -- she's having the baby now!"

At 12:20 I popped out to call our parents and to buy some drinks for my wife in the event that she went into ‘proper' labor. I was gone 15 minutes and as I walked back into the lobby the receptionist said, "You better get upstairs -- she's having the baby now!"

Somehow, against the medication, against all the laws of nature, my wife had done in 15 minutes what takes most women several hours: the baby was on its way out.

Time stopped. I whirled upstairs into the delivery room itself. The doctor whooshed in a couple of minutes later, barely making it; and after a really blurry blur we found ourselves staring at a beautiful baby girl. The staff cleaned her and started doing tests, and my wife and I were left together.

Then the doctor motioned to me and to the attending pediatrician. He pointed down at the now-detached umbilical cord. "Do you see that?"

The pediatrician gasped, "I've never seen one in practice before."

I didn't know what we were looking at.

Our doctor continued, "That is a knot in the umbilical cord, a fully formed knot made by the baby, early on, by creating a loop and pulling itself through it. The umbilical cord is of normal length and you don't have twins so that makes this condition extremely unlikely. We can't pick it up in the scans unless the baby isn't growing, but your daughter was growing well."

He looked up at me. "I don't know how to say this, but if the baby had stayed in for another 24 hours like we wanted, or if the labor had not been premature and she'd gone to term, that knot could have been tightened at any stage. She could have just kicked it or pulled it and well...that's it, all oxygen and nutrients would be cut off immediately, it would be the end of the story – no chance of survival. Your wife did two to four hours labor in 15 minutes despite the medication I prescribed. It's just not normal! Your baby was delivered by angels."

"Your baby was delivered by angels."

It's now ten weeks later and I've just put my daughter to sleep. I feel like a newborn myself. The sensation is so strange, so new and so exhilarating. As I rocked her to sleep on my shoulder, I closed my eyes and felt every second throb through my veins, heart, mind and soul – I could appreciate every moment, just having her there. There was no need for me to do anything – it was ecstasy just to be there, holding her, supporting her, knowing I am her Abba and she is my little girl. This is my little bit of the Garden of Eden: the smell of my little girl and her touch on my cheek.

Incidentally, our daughter had no breathing problems and was out of the NICU in less than 24 hours, despite the fact that the hormone medication had no time to take effect. Our daughter's birth was orchestrated from the very beginning to the very end by the divine Conductor.

The Almighty is there and always will be -- in triumph and sorrow. Our choice is whether we wish to see Him and to involve Him in our lives. That is our choice – to trumpet out our lives and lines as a simple monologue, wilfully unaware that we are not the scriptwriter, director, actor, producer all in one; or to be aware, nuanced and active participants in our lives with God as real a player as anyone else.

Nona, Did I Kill God?
In the Shadow of David and Goliath
Where Do the Laws of Nature Come From?
Saadiah Gaon, Rashi and Maimonides: How Three Rabbis Revolutionized Judaism
Comments