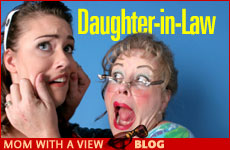 The secret to making the relationship work.

"What do you do if you miss your mother-in-law?"
"Reload and shoot again."

My son-in-law (you know who you are!) told me this joke. Although I have my moments of insecurity in these relatively new relationships, I don't really believe he meant it personally!

However it got me thinking. There's a reason for all the mother-in-law jokes, a reason that actually isn't too funny. Problems with in-laws, if left unchecked, can unfortunately be destructive to a young couple's marriage. Some researchers claim that 60% of all marriages are burdened by struggles with in-laws.

And the most complicated relationship of all, the one fraught with the most potential for divisiveness, seems to be that between mother-in-law and daughter-in-law.

Since all my married children so far are girls, I don't have any experience in this area, so I turned to two women I know who seem to get it right.

"What's your secret?" I asked.

"I have amazing daughters-in-law," answered one. "And they're terrific wives to my sons."

Now it could be that my friend just lucked out. It could be that she just has really exceptional daughters-in-law who never give her any reason for doubt or frustration or any of the other negative emotions that frequently poison this relationship. It could be.

Or -- and this is more likely -- it could be that my friend made a choice. "These are the women my sons picked and I will love them. I will see their good and only focus on that. I will take pleasure in the joy they bring to my son."

I think that this is the decision that wise mothers-in-law make, either consciously or subconsciously.

And it was basically what the second women I spoke to also responded.

But for those who do, remember that the choice is in your hands. And that the real road to your son's continued caring and loyalty, to his ongoing desire to spend time with you is for you to love his wife, your daughter-in-law, fully and unconditionally. Just remind yourself how wonderful she really is.

Sticking to Your Resolution

Fear of YouTube
Why My Iranian Mother Didn’t Want Me to Become a Religious Fanatic
The Jewish History of Prague
Why the Sexual Revolution was Bad for Women
Comments
MOST POPULAR IN Family
Our privacy policy
Aish.com Is Looking for Great Writers