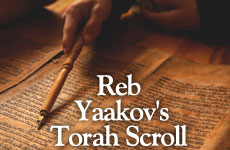 An inspiring true story of dedication and renewal.

Movies about religious Jews tend to make me uncomfortable. No matter how enjoyable they are I usually find that we or our faith are misrepresented. There is no better example of this thanThe Frisco Kid, the Gene Wilder film about a Polish rabbi who comes to America to lead a congregation in San Francisco. His adventurous travels across the continent make for quite an entertaining comedy. There are, however, misrepresentations galore.

Throughout Jewish history, there are many heroic stories of Torah scrolls being rescued.

In my opinion, the biggest one is when the rabbi, along with his Torah scroll, is kidnapped by Indians. The chief asks him, "If I give you back Torah, will you purify your soul through fire?" The rabbi answers, "Yes." As he is lowered into the flames, the chief makes another offer. "If I let you go, may I keep Torah?" The rabbi answers, "No." Impressed with his devotion, the chief has the fire doused and all is well.

While saving a Torah scroll is of course a very heroic deed, it is not something that Jewish law requires one to give up his life for. Yet throughout Jewish history, there are many heroic stories of Torah scrolls being rescued -- some of which could make as exciting a movie as The Frisco Kid. 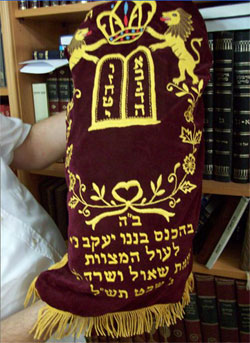 One of these rescued scrolls stands in a place of honor in the living room of my neighbor, Rabbi Yaakov. High on the bookcase, covered with a velvet mantle with a gold-threaded inscription, it gives a special aura to the room. Here is its inspiring story.

Years ago in Romania, my neighbor's grandfather, Yaakov Ben Shaul, was a wealthy landowner with an estate full of prosperous fields and orchards, and a winery with which he supported his healthy family. In order to thank the Almighty for all the good He had given him, he pledged to have a Torah scroll written. Reb Yaakov searched for a God-fearing, holy scribe with an excellent reputation to do the task. The scribe he found was a poor man with a large family. Reb Yaakov convinced him to come live on his estate -- with his wife and children -- where he would be supported for a full year. The scribe was given a house, furnishings, food, and all else that he needed for that year. On the estate was a mikveh, and every day before he began writing, the scribe would immerse himself, in order to have the purest body and soul before writing the sacred scroll. He would even return to immerse every time he had to write the name of God.

When the Torah was completed there was no big celebration. A modest man, Reb Yaakov quietly brought it to the synagogue, and there it stayed until the winds of World War II came to Romania. When the residents of the town were being rounded up for the ghetto, Reb Yaakov's son Shaul made a decision. The Torah scroll was very dear to his family and he did not want it destroyed. So he wrapped it well, dug a deep hole, and buried it the ground.

Like all Holocaust survivors, the Torah scroll had not survived without some scars.

Reb Yaakov, Shaul, and the rest of their extended family -- spouses, children, parents and siblings -- all left for the ghetto. On the way, Reb Yaakov died of a broken heart full of sorrow for the Jewish people. Shaul spent the next four years in work camps and in Siberia. When he finally made his way back home, he discovered that he was the only one of his large family who had survived, he and the Torah scroll.

He quickly located the hiding spot, dug down and found the Torah scroll. Yet like all the Holocaust survivors, the Torah scroll had not survived without some scars. Although it had been rolled up and covered, dampness had seeped in. In the section of the parchment they had last read (ironically from the portion Acharei Mot -- "after the death") the letters had faded, rendering the scroll no longer usable according to Jewish law. It would need to be repaired before it could be used again.

Somehow, Shaul was able to reclaim much of his father's wealth, but that did not solve the problem of finding a scribe in Romania who had survived the Nazi inferno. So he kept the Torah at home, waiting for the time when he would find a scribe who could repair his beloved scroll.

Either leave for Israel within four hours, taking only 15 pounds of belongings, or stay in Romania forever.

In the meantime, Shaul remarried and had a daughter. He and his wife longed to leave Romania for Israel, but the Communist regime would not allow it. One day, though, an important official summoned Shaul to his office and offered two choices: Either give the government all his wealth and leave for Israel within four hours taking only 15 pounds of belongings with him, or alternatively stay in Romania forever. Shaul did not hesitate nor even ask his wife's opinion. He immediately signed the necessary forms and hurried home to pack.

There was not much to pack -- just some baby clothes and, of course, the Torah scroll. But the Torah scroll itself weighed more than 15 pounds. Shaul had a solution. He removed the beautiful silver-gilded handles from the Torah, which brought the scroll -- along with the baby clothes -- down to the required weight. Without looking back, they left Romania behind.

They arrived in Haifa in 1950 with nothing more than some baby clothes, the Torah scroll, and the clothes on their backs. They were sent to a refugee camp near Kiryat Ata. The once-wealthy land owner now struggled to support his family as a day laborer. There was barely enough income to feed his family which had grown with two more children, another girl and a baby boy -- named for Shaul's father, Yaakov. Although there were many scribes in Israel who could fix the Torah, Shaul had no money to pay them. It sat in the closet and waited and waited.

As little Yaakov grew, his father longed to have the Torah scroll repaired in time for his son's Bar Mitzvah. Somehow he scraped together enough money together and found a scribe who indeed restored the Torah in time for Yaakov's 13th birthday. Instead of a party, Yaakov's parents held a celebration for the Torah scroll. And unlike the time his father had quietly placed the Torah into the synagogue with no fanfare, Shaul invited the entire community of Kiryat Ata to the occasion. There were thousands of people, rabbis, torches and dancing. In spite of the joy, there were many tears, for the Torah scroll had become a symbol of the survivors. For many years, it was lovingly read in the synagogue in Kiryat Ata.

Yaakov grew, married, and became a rabbi. When his family decided to make their home in Shilo, his father insisted that they take the Torah with them. It was used for several years and then, the exposure to the damp Romanian soil caught up with the special Torah scroll. The letters faded and it was no longer possible to fix it.

Although the letters may have faded, they are not lost.

Yaakov knew that the Torah scroll was like part of his family, so he brought it to his house, removed its handles, and set it on the shelf in a place of honor. When each of his six sons learned their Bar Mitzvah portion, this Torah scroll was brought down and the boys did their final review from it. Then it was returned to its shelf but not forgotten. Rav Yaakov states emphatically that although the letters may have faded, they are not lost. The Torah of Reb Yaakov, of blessed memory, has jumped off the parchment and into the hearts of his descendents.

No, one does not sacrifice his life for a Torah scroll. On the contrary, the Torah infuses our lives with meaning and purpose. It is the symbol of Jewish survival, continuity, renewal and pride. It is, in the words of Proverbs 3:18, a tree of life for all who grasp it.