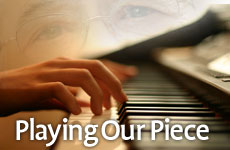 Finding a reason in life to sing.

I grew up knowing that my mother grew up in a way quite different than I. Just how different, though, I wasn't quite sure. As the unbelievably positive person she is, my mother never wanted to dwell on the past, especially a sad one. She is perpetually optimistic, always confident of a brighter road ahead. Looking back at the war years and the hardships she lived through seemed pointless to her.

Over the years we asked for details, to see Holocaust films together, to tour the ruins of her childhood and relive some of her past with her.

"If you want to understand what I went through, watch The Pianist."

No interest. Bits and pieces would sometimes be recalled, always in a positive context. "We met such nice people in the cattle car! We learned to make toys out of calves' knuckles..." Always the kindness, the focus on appreciation, on future, on life.

One night a few years ago my mother called me. "I finally saw a movie that says it all. If you want to understand what I went through, watch The Pianist."

I was surprised. My mother's not all that musical. But I took it out the next day.

There was no parallel that I could see between my mother and the Jewish-Polish musician Władysław Szpilman, the subject of the film. He was not observant, she was. They were not from the same place in Europe. What common message did she feel it conveyed? What made it resonate with her?

The film was meaningful and moving. A renowned pianist remarkably got through the war, resiliently using his contacts and strategic skill. He lived through the unlivable. To maintain his sanity, he composed a piece in his mind, building and elaborating upon it throughout his most difficult of times. He played it repeatedly on an imaginary instrument, visualizing and hearing it in his mind. In the most devastating and inhumane of conditions, he held on to the image of beauty and grace.

My mother cannot play the piano. Where was the comparison? The next morning I phoned her, anxious for some answers.

I admitted confusion and my mother explained. "Forget about where he was from and who he was. He got through it by playing his piece. That's all you need to know to understand my experience. I had my own ‘piece.' I would close my eyes and imagine a pair of shoes that fit...a loaf of bread...a chuppah...a bris...a mikva...celebrations to share with family and grandchildren...I created my own piece, and I knew I would get to play it."

I often find myself thinking of 'my piece.' My son once told me that the root of the Hebrew word for song, shira, is the word yashar, straight. The sense that life is linear -- believing that point A will lead to B in some sensible, God-driven way, as opposed to being random -- gives us reason to sing. We find examples of songs sung at such times of clarity: the Jews at the splitting of the Red Sea, realizing the end result of their years in confusion and servitude . The song of Chana, experiencing personal salvation in the form of a child after almost two decades of yearning. The song of Devora, celebrating God's hand in yielding a miraculous national victory.

At each point, the song was the result of clear understanding of God's plan and His involvement in making it unfold.

My mother's piece has been and continues to be a beautiful one. She married and raised a family of committed Jews in the heart of Connecticut. It was a far cry from Galicia, but she created a home with Jewish values, open and inviting to all. She shared her "piece" with everyone, fueling positive thoughts and inspiring belief in many Jews distant from their heritage. She did much for many in a way that empowered them to believe that they did it on their own.

The one complaint we always had was that we could never get much sympathy from my mother. The joke was that if someone went to her crying about their house burning down, she would shrug it off and see it as an opportunity to redecorate. The low points and lulls in the music never led her to question there still being a climb to the climax of the piece.

My mother truly made it to her own Carnegie Hall

Living a life filled with acts of kindness, surrounded by grandchildren and great-grandchildren, my mother truly made it to her own Carnegie Hall.

Life has provided me with some interesting twists and turns. With each, I turned to my mother for insight and she has never disappointed me. At one particularly difficult time, she matter-of-factly said, "Nothing lasts forever. The good times don't, and the bad times don't either." There are crescendos and dips in the score of the music. But the ultimate direction is one of intricate beauty.

Chana Juravel has been teaching, lecturing and counseling since 1983. She is the director of Machon Lev V'Nefesh, a new women's learning initiative and Counsels adolescents, adults and couples in her private practice in Rockland County, NY. Some of her classes can be found on Aishaudio.com.

A Bathroom Tale: A True Story for Elul

Beauty Beyond Style
The Blue Beyond
Great Place to Live
Is Eating Supposed To Be Spiritual?
Comments
MOST POPULAR IN Family
Our privacy policy