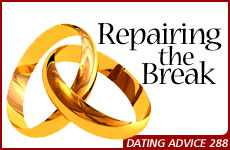 She broke the engagement, and is now second-guessing that decision.

I am seeking some advice on a topic I have not heard or read much about: getting back together with someone after a broken engagement. I recently broke off an engagement and am having serious doubts as to whether I made the right decision. In fact, I'm quite convinced that I made a mistake, and now I want to go back to the courtship.

I am concerned that perhaps I am feeling "seller's remorse," that I am simply bemoaning the lack of a relationship, rather than truly missing this particular man. How does a person know if he is going back to the relationship out of loneliness or out of truly wanting to marry a person for who he is?

Perhaps you can also give me some insight about how I can weigh the reasons I broke off the engagement, vis-a-vis the second thoughts I'm having about that decision. I decided to break up because:

The reasons I'm considering reconciliation are:

Do you know of couples who have gotten back together after a broken engagement? Was that "reunion" ultimately successful in the long term?

And finally, if your advice is "yes" to get back together, what is the best way to actually go about this, given that there are hurt feelings about the break-up?

Thank you for any help you can provide.

We appreciate your writing to us with this question. We're often asked if it's wise for two people who used to date to get back together, but we are rarely asked about the wisdom of rekindling a relationship after a broken engagement. And actually, your question is just as applicable to people who have gotten divorced, and then had second thoughts.

Our answer is that a reconciliation can be successful, but only if both parties address the reasons for their break-up before they get back together.

Some of those reasons are easier to resolve than others. Someone who realizes she ended a courtship because she focused on the wrong priorities, or because she listened to advice she now realizes was incorrect, has gone through an internal decision-making process. She now needs to apologize for the hurt she caused, explain that she made a mistake in judgment, describe the reasons why she would like to start dating again, and ask if he's willing to do so.

Without working through the issues, there's a high probability of another heart-wrenching break-up.

It becomes much more complicated when the couple has broken up because they disagree on a fundamental issue, such as the kind of lifestyle they want to live, their level of religious commitment, or whether they want to have children. Since enduring marriages are built on a foundation of compatible values, goals and direction in life, two people who are considering reconciliation should first explore if they can resolve the impasse in a way that allows each of them to feel comfortable about their solution. It doesn't matter if one person decides to adopt the other's perspective, or if they negotiate a compromise. However, couples who get back together before working through the impasse will only find themselves confronting the issue at a later point, and have a high probability of suffering another heart-wrenching break-up.

It's equally difficult for a couple to attempt to resurrect things after a break-up due to elements in the dynamic between them. Let's say, for example, that an engagement ends because a woman can't accept the partner's difficulty with anger management, or his inability to stand up to his parents when they demean her. Assuming that she cannot accept this about her partner, the onus becomes his to acknowledge that a reconciliation depends on his learning better ways to manage his temper or his relationship with his parents.

Let's look at the reasons why you broke up with your fiancé. We'll look at the last one first. You say that you felt pressured to become engaged in the first place. Whether you said "Yes" before you felt ready, or agreed to get engaged even though you weren't really sure he was right for you, we suggest that you do some real soul-searching. You've said that you become frustrated with him, he didn't make you laugh, and the connection between you wasn't that strong. These can all be related to the possibility that the two of you became engaged before you had enough time to develop emotional intimacy in your relationship, and before you reached a comfort level with certain aspects of his personality.

Before we discuss this further, let's look at all of the elements that should form the basic foundation of an enduring marriage. The first layer of that foundation is compatible values and goals, shared vision for the future, and agreement on the route they'll use to get there.

Every married person can find annoying or frustrating things about their spouse.

Let's look at the element of acceptance. You're having some difficulty accepting those aspects of his personality that you describe as annoying or frustrating. The truth is that just about every married person can find things about their spouse that annoy or frustrate them. The issue is whether they can accept their spouse as an imperfect, sometimes annoying and frustrating human being, or whether they cannot come to terms with these things. As long as you don't expect perfection, be honest about whether you can accept his flaws in the context of who he is as a whole person, or whether you must admit, "I tried, but I just can't be okay with this aspect of his personality." You may need to know him better before you can make this decision.

The other place where you seem to be "stuck" is with emotional intimacy -- that feeling of connectivity, trust and friendship that is the glue that keeps a marriage together. We get a sense that you became engaged before you had enough time for this connection to develop. The only way for you to know if you can develop emotional intimacy with this man is to start dating him again (assuming you've first resolved the other issues we've discussed). With more time together, less pressure, and a few changes you might be able to further develop this connection and to also see if your feelings of affection toward him become stronger.

We suggest the two of you follow what we call a "dating diet." See each other for four weeks, twice a week. The dates should take place in different venues. Make a few of them interactive (shopping together for a present, working on a community project, playing a sport game or board game, cooking a meal) and a few of them fun. Shaya Ostrov's book The Inner Circle has some good pointers about how to add depth to your conversations and find different ways to relate to each other.

While you are on this diet, don't talk on the telephone in between the dates, and please don't analyze your relationship. After four weeks, see if you feel more connected, are able to enjoy each other's company, and have fun together. You may not be ready to become engaged, but you will know if you've made enough progress to continue in that direction, or if you haven't and should break up once and for all.

The positive points you mention in your letter tell us that you respect and admire this man, and that you share values, goals and a vision for the future. We sense that if you're able to come to terms with his personality, it is worthwhile for you to invest four weeks into seeing if you can intensify the emotional connection and your feelings toward him.

And you're right that it may be difficult to convince this man to try again after he's been hurt by your decision to end the engagement. We suggest that you apologize for hurting him, telling him that you were confused, have gained a lot of clarity, and have resolved most of the things that were troubling you. It's also important to tell him that you realize you probably got engaged too soon, before you developed a strong enough emotional connection, and that you want to give yourselves a chance to try to do that. Ask if he's willing to invest four weeks to see if you can become a couple once again, this time for keeps.