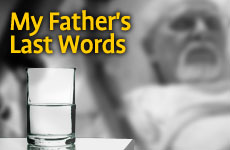 Consolation in the darkest moments.

The most difficult part of moving to Israel was moving away from my family -- especially from my father who suffered from a rare form of cancer. Amidst my work-related travels across the United States, I was going to spend a few days with my parents and I waited anxiously for that reunion.

As I was walking out the door to head to the airport, I quickly ran to my study and scanned the book shelves, and, without thought, grabbed "Night" by Elie Wiesel.

I began reading the book before takeoff and I could not put it down. The book captivated my attention from beginning to end. And what an ending it was.

Mr. Wiesel's father begged him to get him some water to quench his thirst as he lay dying in the barracks of concentration camp. But Wiesel could not do so for fear of severe retribution from the guards. I gasped as I read that by morning, his father was dead. The story increased my desire to see my own father as quickly as possible.

The reunion with my father was as special as I had anticipated and we spent a few very meaningful days together. The day before I was supposed to head back to Israel, my father seemed weaker than usual and my gut told me that something was wrong. I delayed my return trip and sure enough, my father took a turn for the worse.

He was hospitalized; his cancer had metastasized. The doctors decided to try one last life saving procedure which required first sedating him, knowing that chances were he would not wake up alive. I helped my father say the final viduy/confession and then it was time to say goodbye. It was the most emotional moment of my life. I then had no choice but to part ways with him to enable the doctors to do their work.

As I reached to pull the door, my father called out to me. "Yanky, can you get me some water?"

I froze in my tracks. I turned around to get him some water but the doctor explained that the water would interfere with the procedure. "I'm sorry, Daddy, the doctor won't allow it." And with that, I left the room.

I was shaken by this incident for quite some time. How could it be that just two weeks after reading about Elie Wiesel's horrible last experience with his father, the same exact thing happened to me?

There was no way it was just a coincidence. What message was God telling me?

In the darkest hour of my life, God was right in that room with me.

And then it hit me. God was simply reminding me that He was there. In the darkest hour of my life, in my moment of greatest sadness, He was right in that room with me. And there is some comfort in knowing that.

We are on the verge of commemorating the most tragic date in the Jewish calendar -- Tisha B'Av. We have numerous restrictions during the first nine days of this month to help prepare ourselves to mourn for all that we have suffered and lost.

And yet the name of the month is "Av" which means "father." This is also not a coincidence. The message is clear. Despite all of our suffering and mourning, we have a Father who is there with us every step of the way. While we mourn, saying the word "Father" every time we mention the date "Tisha B'Av" should provide us with the same comfort and hope I received from my father's last words to me.

Filling the Crevices of the Wall

Finding the Joy of Tisha B’Av

Addiction Recovery and Tisha B’Av: Lessons from the Frontlines of Pain

Stranger on the Hospital Stairs
The Softball Player
How This 6 Generation Bread Baker Brought Back Israel’s Ancient Grains
Olivia Newton John’s Grandfather was a Nobel-Prize Winning Jewish Physicist
Comments
MOST POPULAR IN Spirituality
Our privacy policy
Aish.com Is Looking for Great Writers