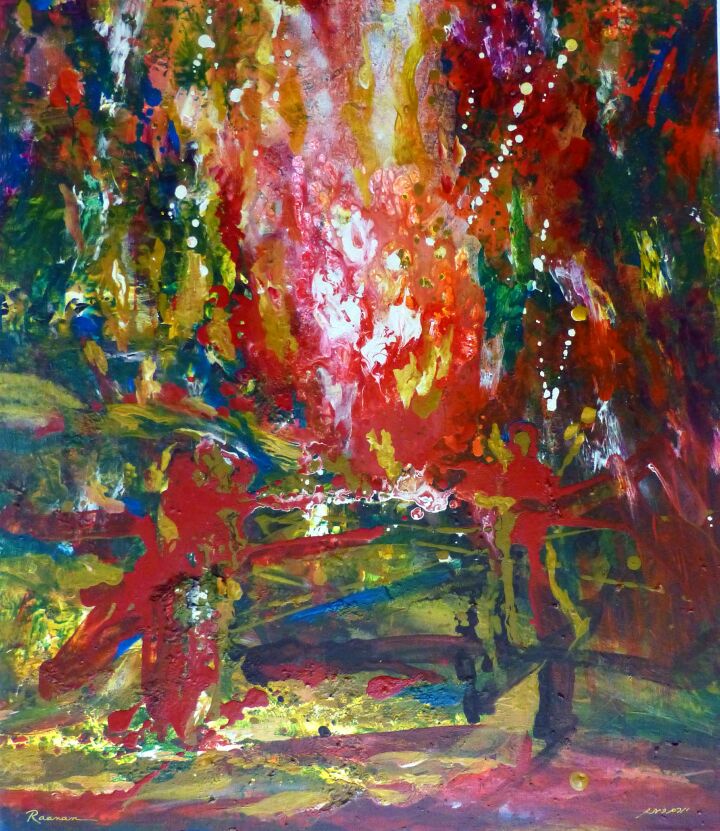 Aaron's sons, Nadav and Avihu, each took his pan, put fire in them, and placed incense on it. They offered it before God ? a foreign fire, that He had not commanded them [to offer.] A fire came forth from before God and consumed them, and they died before God. (Leviticus 10:1-2)

At the inauguration ceremony of the Mishkan, a "fire of favor" came down from above onto the Altar as the people sang with joy. In stark contrast to this joyous event was the unauthorized incense, the "foreign fire" offered by Nadav and Avihu. Swept up in their spiritual intoxication, they were consumed by a "counter-fire" from heaven.

This tension of conflicting energies is reflected in the opposing colors of the painting. Muted green hues are overwhelmed by strong fiery reds. As the suggested figures thrust their "strange" fire into a force field indicated by thin vertical and horizontal lines, a fire seems to come down and engulf them. The two figures are separate, yet energetic lines pull them together; they become one with the fire, rising upward as the flames dance between life and death in this continuum.

The Shocking True Story behind Spielberg’s Next Film
Saadiah Gaon, Rashi and Maimonides: How Three Rabbis Revolutionized Judaism
Breaking Barriers and Baking Babka: How One Jewish Mom Became a YouTube Sensation
My Precarious Self-Esteem
Is Grease the Word?
Where Do the Laws of Nature Come From?
Megillah Gorilla Saves the Day
Challah Reuben “Grinder”
Big OnThe Little Things
Comments
More Articles on Shmini
MOST POPULAR AT Aish.com
Where Do the Laws of Nature Come From?
Our privacy policy
Aish.com Is Looking for Great Writers